Pandora today announced the launch of its own, in-app voice assistant that you can call up at any time by saying “Hey Pandora,” followed by a request to play the music or podcasts you want to hear. The feature will allow you to not only control music playback with commands to play a specific artist, album, radio or playlist, but will also be capable of delivering results customized to you when responding to vague commands or those related to activity or mood. For example, you’ll get personalized results for requests like “play something new,” “play more like this,” “play music for relaxing,” “play workout music,” “play something I like” and others.

The company reports strong adoption of its service on voice-activated speakers, like Amazon Echo devices, where now millions of listeners launch Pandora music by speaking — a trend that inspired the move to launch in-app voice control.

“Voice is just an expected new way that you engage with any app,” notes Pandora Chief Product Officer Chris Phillips. “On the mobile app, we’re doing more than just your typical request against the catalog… asking: ‘hey, Pandora,’ to search and play or pause or skip,” he says. “What we’re doing that we think is pretty special is we’re taking that voice utterance of what someone asks for, and we’re applying our personalized recommendations to the response,” Phillips explains.

That means when you ask Pandora to play you something new, the app will return a selection that won’t resemble everyone else’s music, but will rather be informed by your own listening habits and personal tastes.

The way that result is returned may also vary — for some, it could be a playlist, for others an album and for others, it could be just a new song, a personalized soundtrack or a radio station. 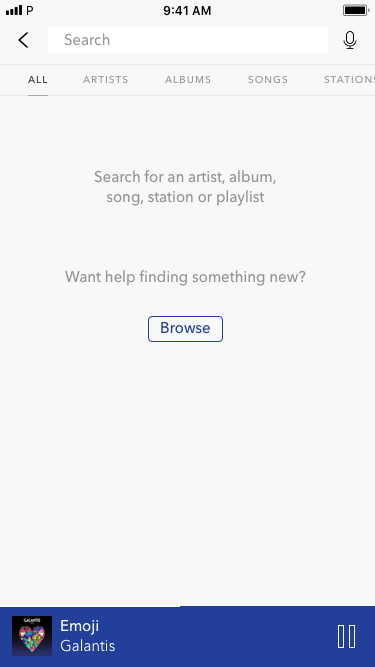 “Play something new” isn’t the only command that will yield a personalized response, Pandora says. It will also return personalized results for commands related to your mood or activity — like workout music, something to relax to, music for cooking and more.

For podcasts, it can dig up episodes with a specific guest, play shows by title, or even deliver show recommendations, among other things.

Voice commands can be used in lieu of pressing buttons, too, in order to do things like add songs to a playlist or giving a song you like a thumbs up, for instance.

The new feature, called “Voice Mode,” taps into Pandora’s machine learning and data science capabilities, which is an active battleground between music services.

Spotify, for example, is well known for its deep personalization with its Discover Weekly and other custom playlists, like its Daily Mixes. But its own “voice mode” option is only available for its Premium users, according to a FAQ on the company’s website.

Pandora, meanwhile, is planning to roll out Voice Mode to all users — both free and paid.

For free users, the feature will work in conjunction with an existing ad product that allows users to opt in to watch a video in order to gain temporary access to Pandora’s on-demand service.

While this option is not live at launch, the plan is to allow any user to use the “Hey Pandora” command, then redirect free users with a request to play music on demand to instead play the opt-in ad first.

Pandora Voice Mode will launch today, January 15, to a percentage of the iOS and Android user base — around a million listeners. The company will track the speed, accuracy and performance of its results before rolling it out more broadly over the next couple of months.

Users with a Google Home device can also cast from their Pandora app to their smart speaker, and a similar feature will arrive on Alexa devices soon, the company believes.

Pandora works with Siri Shortcuts, too. That means you can now use voice to launch the app itself, then play a personalized selection of music without having to touch your phone at all.

Voice Mode will be available in the Pandora app via the search bar next to the magnifying glass.