23andMe, co-founded by CEO Anne Wojcicki, has deployed its latest update, featuring interactive ancestry details, cultural insights about food, art and language, and the option to order a physical ancestry book. Starting today, customers will be able to see more granular ancestry results from more than 1,000 regions, as well as 33 population-specific pages about cultural information.

Before this update, 23andMe simply said I was 12 percent British and Irish. Now, it’s able to break down where in the U.K. my ancestors likely lived. 23andMe, however, was not able to detect more granular data in Ireland.

It was also unable to detect additional evidence in Nigeria, where 23andMe says 25.2 percent of my ancestry comes from. That’s likely because, even though 23andMe has made efforts to grow the number of African and African-American people in its data set, it’s still lacking. Though, it’s worth noting no ancestry service has it all.

“The odds of receiving more granular results from a particular region (in your particular case, Ireland or Nigeria) depends on how much Nigerian DNA someone has and how many individuals are in the 23andMe reference dataset,” 23andMe Ancestry Group Product Manager Robin Smith told TechCrunch. “The reference dataset is continuously growing, and customers should be seeing even more refined ancestry results later in the year.” 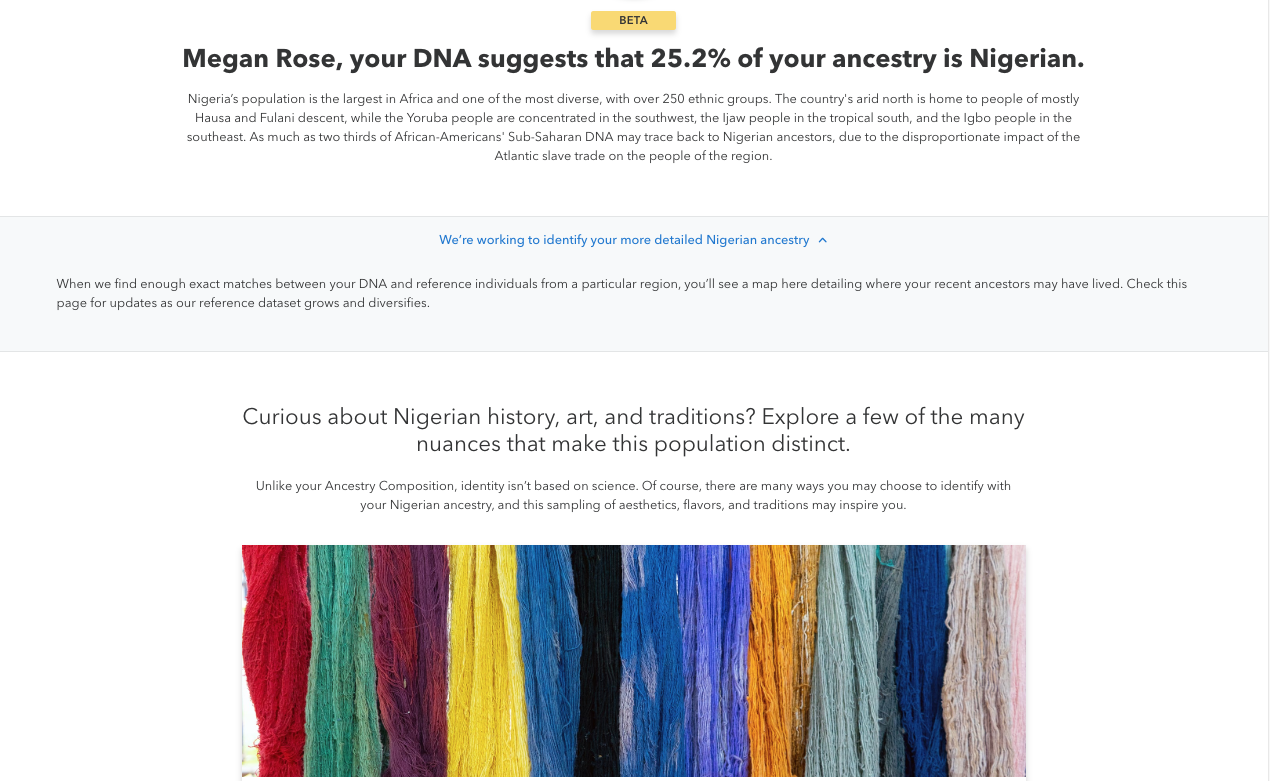 “I’m not surprised you’ll get different results from different companies,” Dr. Jennifer Raff, Assistant Professor in the Department of Anthropology at the University of Kansas told TechCrunch back in September. “They have their own proprietary info based on those samples. If one of them has lots of individuals from a particular region and the other company does not, you’re more likely to show up as having ancestry from that region whereas if the other company doesn’t have that data represented in their database, it’s going to show up as a different population.”

“This is a problem and it’s one we need to educate people about — that your genetic ancestry is not your identity,” Dr. Raff said. “Also, those numbers really reflect what is in their database, and what’s in the database is largely reflective of genetic variations we see in present-day populations. That doesn’t necessarily mean it’s reflecting your actual ancestors.”

I asked Dr. Raff if DNA testing is just a load of crock, but she said it’s not.

“It’s not complete bullshit but there’s also a lot of uncertainty there,” she said. “We [humans] like definitive answers. We’re trying to use this as a tool for exploring our past. We like to have definite answers when we’re doing these explorations, but unfortunately, it’s not there yet.”

But that’s not entirely the fault of 23andMe and Ancestry. In order to be as accurate as humanly possible, these companies would need to sequence every person on the planet. That’s not currently feasible, so in the meantime, Ancestry points to its confidence levels.

“We take this pretty seriously and we do want people to understand what is something they can put money in the bank on, and what they should take with a grain of salt,” Ancestry Chief Scientific Officer Catherine Ball told TechCrunch back in September.

She added that Ancestry tries to be transparent about confidence levels. And, in Africa specifically, “it’s one of our most exciting opportunities and greatest challenge” due to the enormous amount of genetic diversity on the continent.