Tor, the open-source initiative that provides a more secure way to access the internet, is continuing to diversify its funding away from its long-standing reliance on U.S. government grants.

The Tor Project — the organization behind the service which stands for “The Onion Router” — announced this week that it brought in a record $460,000 from individual donors in 2018. In addition, recently released financial information shows it raised a record $4.13 million from all sources in 2017 thanks to a growth in non-U.S. government donors.

The individual donation push represents an increase on the $400,000 it raised in 2017. A large part of that is down to Tor ally Mozilla, which once again pledged to match donations in the closing months of the year, while an anonymous individual matched all new backers who pledged up to $20,000.

Overall, the organization said that it attracted donations from 115 countries worldwide in 2018, which reflects its importance outside of the U.S. 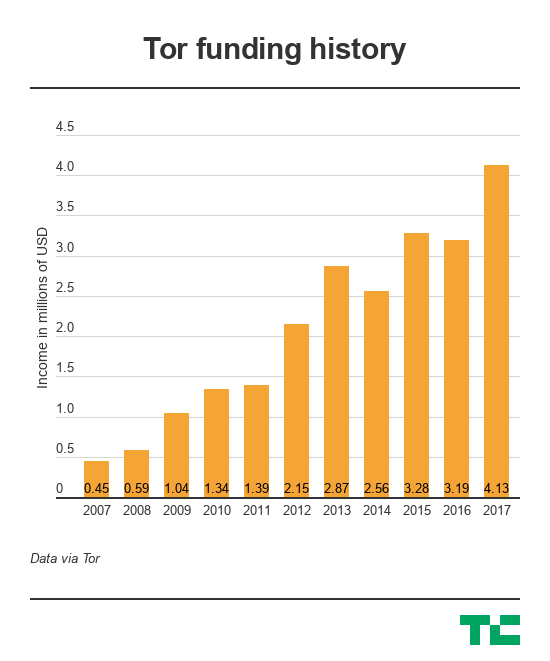 The record donation haul comes weeks after the Tor Project quietly revealed its latest financials — for 2017 — which show it has lessened its dependence on U.S. government sources. That’s been a key goal for some time, particularly after allegations that the FBI paid Carnegie Mellon researchers to help crack Tor, which served as a major motivation for the introduction of fundraising drives in 2015. 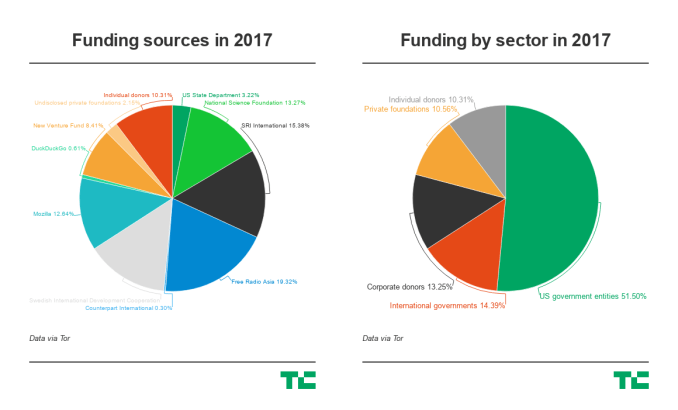 Tor is best known for being used by NSA whistleblower Edward Snowden but, with governments across the world cracking down on the internet, it is a resource that’s increasingly necessary if we are to guard the world’s right to a free internet.

Tor has certainly been busy making its technology more accessible over the last year.

It launched its first official mobile browser for Android in September, and the same month it released TorBrowser 8.0, its most usable browser yet, which is based on Firefox’s 2017 Quantum structure. It has also worked closely with Mozilla to bring Tor into Firefox itself as it has already done with Brave, a browser firm led by former Mozilla CEO Brendan Eich.

Beyond the browser and the Tor network itself, which is designed to minimize the potential for network surveillance, the organization also develops a range of other projects. More than two million people are estimated to use Tor, according to data from the organization.

Note 01/11/19 20:38 PST: Article updated to correct that the organization is the Tor Project not Tor Foundation