The Wing opened its doors to entrepreneurial women in New York City in 2016 with the support of about $2.5 million in seed funding, marketing itself as a place for women of diverse backgrounds to meet and do work. Now, as it officially amends its membership policy to allow all genders — yes, men included — it will have to work harder to stay true to its promise and purpose: to create a feminist co-working empire.

While The Wing grew its community of female-identifying, non-binary and gender non-conforming members to more than 6,000, debates surrounding its anti-male doctrine sprang up on and off the internet. Men aren’t allowed in The Wing — is that legal? Many questioned. No, probably not. Why? Because as much as The Wing disguises itself as a social club, it’s technically too large to benefit from laws that actually permit those sorts of groups to practice gender discrimination, according to a Jezebel report. So yes, male-only social clubs were able to thrive for decades because they were lean — small enough to legally discriminate. Still, there’s no reason The Wing needed to bar men from accessing its properties and resources, other than the fact that there have been protected male safe-havens promoting business and entrepreneurship for a very long time, while female-focused rooms of that sort have been few and far between.

Thought pieces were written, Tweets were sent and the New York City Commission on Human Rights opened a “commission-initiated investigation,” which is still ongoing, according to The Wing. Then a man by the name of James Pietrangelo filed a $12 million lawsuit against The Wing alleging its “illegal discrimination against men … was/is egregious: brazen, flagrant, intentional, willful, wanton, actually malicious, motivated by evil and ill-will, deliberately oppressive, outrageous, and willfully and callus disregardful of the rights of men.”

Morning @NYCCHR while you’re wasting time investigating the women’s club @the_wing maybe also launch some investigations into boys clubs such as the tech industry, the restaurant and food industry, The film industry, https://t.co/qEJ0QAtG5O

Pietrangelo takes issue with essentially every piece of The Wing’s DNA: its slogans, decor, schemes and employees. “The Wing’s brazen attitude towards the law and the civil rights of men can be summed up by one of The Wing’s own favorite slogans: “Girls Doing Whatever The F*ck They Want,” the lawsuit states.

“Of the 53 corporate and/or front-of-the-house positions, identified on the wing’s About page of its website, all 53 are women — arguably a statistical impossibility if the wing is not discriminating based on sex and/or gender-identity,” it continues — however The Wing says it also employs men and non-binary individuals. It should be noted that Pietrangelo is the dictionary definition of litigious. He has brought forth many lawsuits, including one in which he sued the city of Avon Lake because a local skate park was too loud and another against the Alvas Corporation in Vermont for the mishandling of deli meat.

Now, The Wing says it’s altered its membership policy to allow access to anyone, as first reported by Insider. The company, however, said the transition has been planned for some time as a result of conversations with trans and non-binary members and is not a result of the ongoing lawsuit: “The membership policy was codified and adopted before the lawsuit,” a spokesperson for The Wing told TechCrunch. 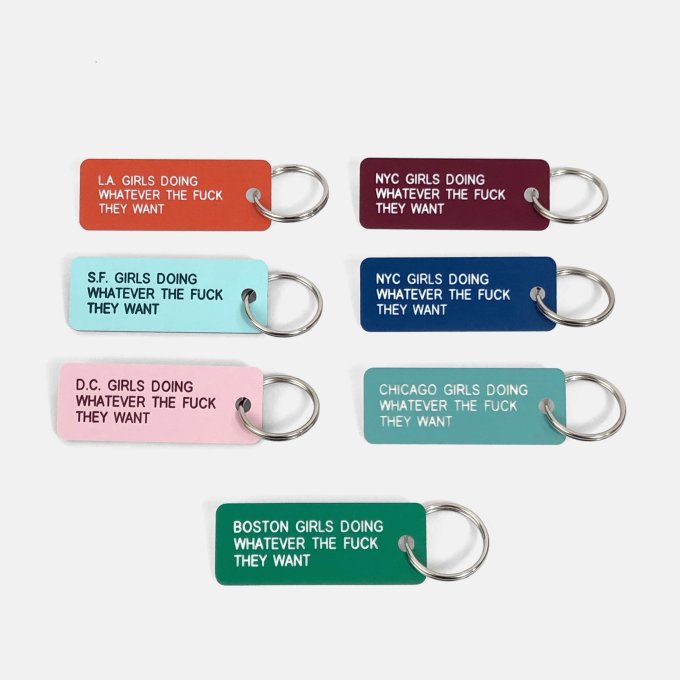 Keychains for sale on The Wing’s online shop.

“Gender identity and gender presentation are two distinct concepts and do not always align,” co-founder and chief executive Audrey Gelman wrote in a letter to members announcing the policy amendment. “To that end, we’ve made some internal updates and adopted written membership policies to ensure that our staff is trained not to make assumptions about someone’s identity based on how they present, or to ask prospective members or guests to self-identify. We initiated these trainings and policies so that we can continue to build a community that reflects our values and pushes us all to be more inclusive.”

As for how new membership policies will change The Wing’s female-friendly environment and community of women, that’s to be determined. The company is still figuring out just how it will ensure any new members believe and respect its mission of promoting women.

Ultimately, The Wing’s decision to open up membership is good business. Given that it is a space meant for entrepreneurs to get work done, it makes sense that it would be inclusive of all genders, as women and non-binary folk often build businesses with cisgender males, too. The Riveter, another female-focused co-working startup, has allowed men in from the very beginning for that very reason.

“I don’t think the future is female, I think the future is fluid,” The Riveter founder and CEO Amy Nelson told TechCrunch last month. “Gender is becoming an outdated idea but at the same time, it’s important to think of women when we build these spaces … There is a lot of value to women’s only spaces but our take on it is we want to redefine the future of work for women and we want everyone to be part of it.”

Despite demonstrating a certain brand of millennial feminism that isn’t inclusive or appealing to all, The Wing has been very blatant about its diversity and inclusion efforts since its beginning. Sure, it’s learned and adapted along the way, but considering the dearth of attempts in Silicon Valley to create safe spaces for women or to fund women’s businesses, The Wing’s efforts to promote women should be encouraged rather than torn down.

The Wing gets $75M from Sequoia, Airbnb