The idea is to put it on before you go to bed, play a meditation and then fall asleep as normal. Thanks to Muse’s acquisition of Meditation Studio, Muse now has an app partnership with Amazon Alexa that will enable Softband owners to play a meditation via Alexa as they fall asleep. For those without an Alexa-enabled device, Muse recommends having a speaker nearby so you don’t have to fall asleep with headphones on, Muse Director of Brand Marketing Nadia Kumentas told TechCrunch on the showroom floor.

In the morning, you can pop open the app to see how you slept. Over time, you can see improvements and changes in your sleep behavior. Down the road, Muse will likely use this Softband in other use cases, Muse VP of Product Management Alec Singleton told TechCrunch.

“The Softband is exciting because of the new use cases it opens up,” Singleton said. “You can fit it under a helmet or wear it to yoga.” 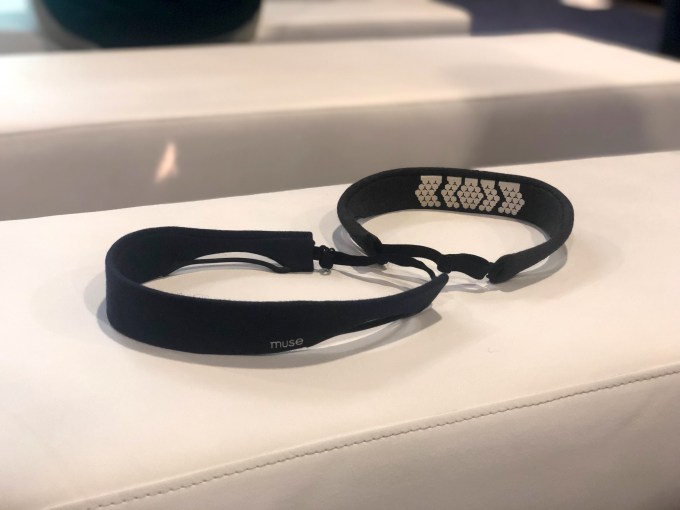 But for now, Muse is focused on the sleep use case. The Softband, for example, will be able to tell when you’ve fallen asleep and will then turn itself off. Singleton said he expects the Softband to launch sometime in Q4 of this year at a price point that is comparable to what the Muse 2 costs ($249).

Muse also recently announced voice coaching, guided meditations and biosignal feedback to its app as part of its software as a service offering. Later this month, Muse headband owners will be able to subscribe to in-app content focused on stress management, work, travel and relaxation. Phase two of this is to provide intelligent voice feedback that will chime in if it senses you’re drifting off.

This is Muse’s third headband, but its first soft headband. The first came out back in 2014 and the second, the Muse 2, was released just last year in October to offer real-time feedback about your mind, body, heart and breath.