Facebook has confirmed it has removed the pages and profiles of a far-right political activist in the U.K. after concerns were raised in parliament about aggressive intimidation of politicians and journalists trying to go about their business in and around Westminster.

PayPal has also closed an account that was being used to solicit donations for “political activism.”

The intimidation is being conducted by a small group of extreme Brexit supporters who have — ironically enough — lifted the “yellow vest” dress code from French anti-government protestors, and are also making use of mainstream social media and crowdfunding platforms to fund and amplify attacks on public figures in an attempt to squash debate and drive an extreme “no deal” Brexit. (Context: The clock is ticking down to March 29; the date when the U.K. is due to leave the European Union, with or without a withdrawal deal.)

In incidents widely shared on social media this week, individuals from the group were filmed live-streaming harassment of Remain supporting Conservative MP Anna Soubry who was mobbed and shouted at as she walked down the street to return to parliament after being interviewed live on TV in front of the Palace of Westminster where the group heckled her with repeat chants of “Nazi.”

After the thugs chanted Nazi at Anna Soubry while she was on BBC, I went to check on her. But she had company… pic.twitter.com/II7nIdqMoF

Members of the same group were also filmed with fisted smartphones, chasing and hurling abuse at left-wing commentator Owen Jones as he walked down a London street.

In another video, one of the individuals leading the verbal attacks, who has been identified in the press and online as a man called James Goddard, can be seen swearing viciously at Met Police officers and threatening to bring “war.”

The speaker of the House of Commons said today that he had written to the head of the Met Police to urge action against the “aggressive, threatening and intimidating behaviour towards MPs and journalists” around Westminster.

The Guardian reports that at least 115 MPs have written to police requesting extra protection.

Contacted today about Goddard’s presence on its platform, Facebook later confirmed to us that it had pulled the plug. “We have removed James Goddard’s Facebook Pages and Groups for violating our policies on hate speech,” a spokesperson told us. “We will not tolerate hate speech on Facebook which creates an environment of intimidation and which may provoke real-world violence.”

Earlier today one of his pages was still live on Facebook, and in a post from December 14 Goddard can be seen soliciting donations via PayPal so he can continue “confronting” people. 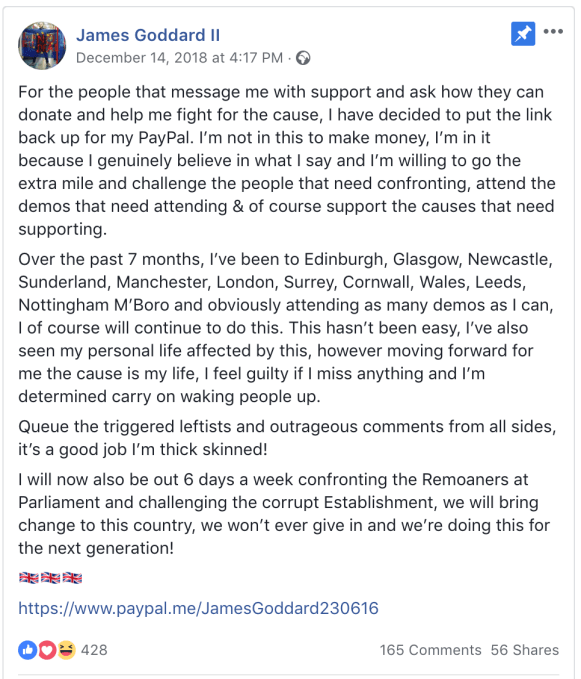 We also asked PayPal about Goddard’s use of its tools, pointing to the company’s terms of use, which prohibit the use of the platform for promoting “hate, violence, racial and other forms of intolerance that is discriminatory.”

PayPal declined to comment on “any specific customer’s account,” citing its privacy policy, but a spokesperson told us: “We do review accounts that have been flagged to us for possible breaches of our policies, and we will take action if appropriate.”

A few hours later PayPal also appeared to have pulled the plug on Goddard’s account.

A Patreon page he had seemingly been using to solicit donations for “political content, activism” is also now listed as “under review” at the time of writing.

But Goddard remains on Twitter, where he is (currently) complaining to his ~4K followers about being de-platformed by Facebook and PayPal, and calling other people “fascists.” (Asked whether it’s investigating Goddard’s use of its platform, a Twitter spokesperson told us: “We have robust Rules and Terms of Service in place which we enforce consistently and diligently when violations are found.”)

How should mainstream tech platforms respond to people who use their tools for targeted harassment? If you read companies’ terms and conditions, most prohibit abusive and intimidating conduct. Though in practice, plenty flows until flagged and reviewed. (And even then, take-downs frequently fail to follow.)

For all the claims from platforms that they’re getting better about enforcing their claimed community standards, there are countless examples of continued and very abject failure.

Facebook’s 2.2 billion-plus users especially make for an awful lot of content to wrangle. But none of these platforms is renowned for being proactive about weeding out violent types of speech they claim to forbid. And when intimidation is dressed up as political speech, and public figures are involved, they appear especially paralyzed.

Social media-savvy far-right groups grokked this loophole long ago (see: Gamergate for a rough start date); and are continuing to exploit default inaction to get on with the violent business of megaphoning hate in the meanwhile.

You could say platforms are being gamed, but the money they make off accelerated outrage makes them rather more complicit in the problem.

The irony is it’s free speech that suffers in such a thuggish and febrile atmosphere. Yet platforms remain complicit in its undoing, doing nothing to stop hate mongers turning hugely powerful high-tech soapboxes into abuse funnels.

They do this by choosing to allow groups with fascist ideologies to operate freely until enough reports are filed and/or high-level political attention frowns down on particular individuals that they’ll step in and act.

Facebook’s community standards claim it aims to prevent “real-world harm.” But with such a narrow prescription, it’s failing spectacularly to prevent deliberate, malicious and coordinated harassment campaigns that are designed to sew social division and upend constructive conversation, replacing the hard-won social convention of robust political debate with mindless jeering and threats. This is not progress.

There’s nothing healthy for society or speech if mainstream platforms sit on their hands while abusive users bludgeon, bully and bend public debate into a peculiarly intolerant shape.

But we’re still waiting for the tech giants to have that revelation. And in the meantime, they’re happy to let you watch a live-streamed glimpse of mob rule.