Augmented reality has been a bit of a sleeper at this year’s CES. It seems likely we’ll see a bit more on that front next month at Mobile World Congress. After all, smartphones are largely considered the first frontier for AR adoption. Still, that’s not going to stop some companies from going all-in with head mounted displays.

Rokid has been showing off its own solution for the space since roughly this time last year — though back then they were still very much in the early prototype phase. Things have progressed a bit in the intervening 365 days, and the company claims to be “nearing mass-production” with plans to start shipping product in the spring. 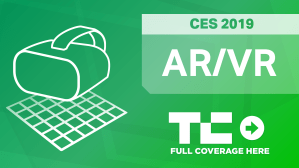 The latest version of Rokid Glass is 40 percent smaller than the version shown off last year. Even so, these should not be regarded as mainstream hardware. Like so many other AR glasses we’ve seen in recent years, the company said the devices are designed to be used as “an open hardware and software platform where all clients and partners can build industrial and enterprise software use-cases. Various applications include manufacturing, product inspection, field service and remote conferencing.”

This week at the show, Rokid will be showing off Project Aurora, the above goggle-looking hardware, which is designed to offer a sort of surrogate for your existing hardware — things like PCs and tablets. It’s a way, I suppose to get away from the screen without actually, you know, getting away from the screen.

Here’s what the company had to say in a press release, “By leveraging the ever-increasing computing power of mobile devices, Project Aurora supplements these robust experiences by providing a lightweight form factor, industry-leading display quality, and multimodal handsfree input. Project Aurora will connect consumers to rich, immersive AR content and experiences that were previously unattainable with such a lightweight smart glass, and we’re excited to share how the future looks through it.”

From the sound of it, the company’s angling to offer up a take on the Minority Report-style tech that has long been synonymous with futuristic interfaces. How it actually plays out in person is another question, entirely, of course. We should get a closer look this week at CES.