If you’ve gone down the rabbit hole with Netflix’s latest Black Mirror release, there’s (at least) one more Easter egg out there. As some intrepid Reddit users discovered, you can actually visit two different versions of fictional software company Tuckersoft’s website and… spoilers ahead.

On the regular Tuckersoft site, discovered through a QR code embedded in the show itself, Tuckersoft advertises its game lineup including Bandersnatch, a “revolutionary game from Stefan Butler.” In this timeline, Tuckersoft released both Nohzdyve and Bandersnatch, and Stefan eventually eclipsed his gaming idol Colin’s own fame, driving the company forward. As the site notes:

While Colin Ritman was Tuckersoft’s leading man, it was Stefan Butler’s 1984 release, Bandersnatch, that catapulted the company to new heights. The innovative narrative and gameplay transformed interactive entertainment forever. 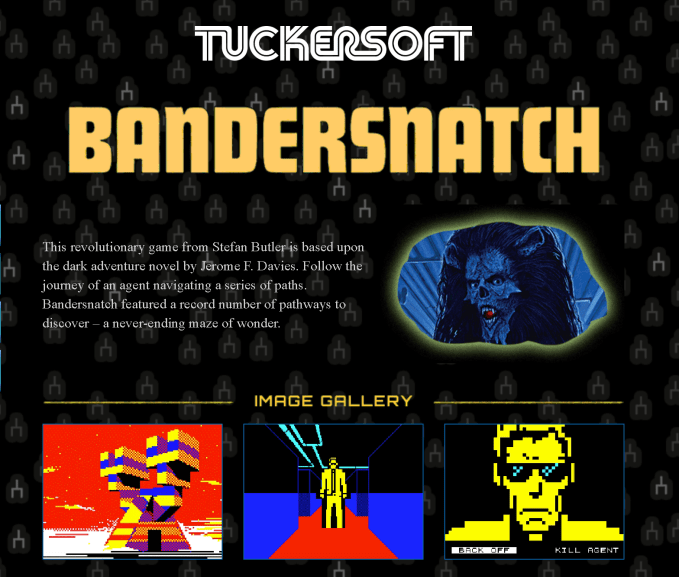 If you visit the Tuckersoft site but strip out the www., the company never released Colin’s game due to a tragic incident. If you’ve seen the episode, you can probably guess what that was. This version of the site includes the following text:

A bleak turn of events would lead to the abrupt cancellation of Colin Ritman’s highly-anticipated game, Nohzdyve, and the end of Stefan Butler’s promising career.

Metl Hedd remains a classic, but the world will have to wonder what Nohzdyve was like. Rumour has it, an early version of the game is somewhere out there, waiting to be played for the first time.

In the timeline in which Colin was able to finish Nohzdyve, the game’s sub-page has a download link for a file called nohzdyve.tap and the instructions to “Play Nohzdyve on your ZX Spectrum emulator.” Apparently, the file works and if you run Windows and you’re willing to install an emulator (like Speccy) for the obscure British 8-bit console, you can actually play Colin’s rather prescient release. We’re told it might work on a Commodore 64 emulator too, but haven’t tested that out (yet).

So far it doesn’t look like Bandersnatch is playable anywhere, but given that the episode itself is a game and the game itself results in certain horror, that’s probably for the best.

Netflix releases a trailer for ‘Bandersnatch,’ the mysterious new episode of ‘Black Mirror’