A new app offers Apple Music subscribers a way to look back at their favorite music of the year and other streaming highlights, similar to Spotify’s annual “Wrapped” feature. The app, from developer NoiseHub, is simply called “Music Year in Review,” and its sole purpose is to offer Apple Music customers their own set of music streaming insights for 2018.

If you’re not familiar with “Wrapped,” it’s Spotify’s data-rich yearly review that allows you to find out things like your most-played artists and songs, top genres, minutes streamed, new music discoveries and more from the past year. The streaming service delivers these insights through a flashy, personalized website. It also puts your top 100 songs from the year into a playlist you can save to your own library.

It only crunches the numbers across a few metrics: how many minutes you spent listening to your favorite artist this year on Apple Music, as well as your top five songs and artists, including which are your No. 1 favorites. It also will return your top genre of the year.

However, for Apple Music subscribers, there hasn’t been an easy way to access this data before now. Unfortunately, Apple doesn’t offer a personalized, annual review feature like Spotify’s.

One caveat to using the new app is that NoiseHub asks for your email address to get started, which it says it uses to “save your data.”

There isn’t a further explanation as to whether or not that email will be used again in the future, nor is there a privacy policy link. If sharing your email makes you uncomfortable, you may want to just use a disposable address — it doesn’t impact the app’s ability to retrieve your data. (You can also skip email entry by tapping the arrow button.)

Instead, NoiseHub pops up a permissions dialog box to request access to Apple Music in order to do its work. 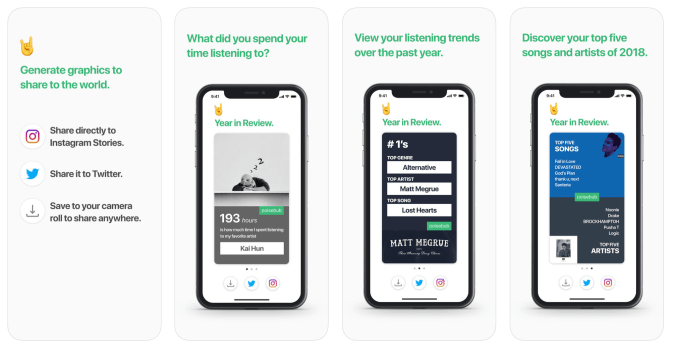 It then returns a set of three graphics, the first featuring the time you spent with your top artist, the second with your No. 1s for the year (genre, artist and song) and the third with your top five songs and top five artists.

The graphics are designed to be posted to Instagram or Twitter with a tap on the included sharing buttons, or can be downloaded to your Camera Roll for sharing elsewhere.

The app was developed by NoiseHub, a startup co-founded by Samir Shekhawat and Alex Santarelli, which was previously developing a social network for music lovers.

“For the past few years, we’ve been working on a social music app called NoiseHub. During that time, as we made mistakes, we iterated slowly,” explains Music Year in Review app’s creator, Samir Shekhawat. “This application is still internal – it’s been a side project for years – but when we heard about Spotify’s 2018 Wrapped, we decided to take a brief break on NoiseHub and dedicate a weekend during finals week to create an Apple Music Year in Review,” he says.

The app may become a part of NoiseHub’s experience in the future, if the team decides to work on that project again. (They’ve stopped indefinitely for now.) In the meantime, they want to flesh out the annual review app with more data and add more graphics.

The Music Year in Review app is a free download on the App Store.

It still seems to be a bit of an undiscovered gem — there aren’t any public posts to speak of, and its Dribbble page has just 155 views.

While some early testers experienced a bug that led to crashes, the app worked for us without error. The reports stem from those who don’t have much data in Apple Music, in many cases. The team believes they have a bug fix, but the App Store is closed for the holidays.