WireGuard is a new VPN protocol that promises to be faster and more secure at the same time. And you can now connect to a WireGuard server on iOS thanks to the official open-source app.

Compared to other VPN protocols, such as OpenVPN and IPsec, it can maintain a VPN connection even if you change from one network to another.

Let’s say you’re in a hotel and you’re heading to a busy conference center. If you have established a connection with your WireGuard server, your phone will remain connected to your VPN server when you exit the hotel and switch to cellular network, and when you arrive at the conference center and connect to the Wi-Fi network.

This feature alone is a great improvement. Other protocols let you set up “On Demand” connections with VPN servers, but it usually takes a few seconds to re-activate the VPN connection every time your network status changes.

The WireGuard team says that the iOS app is still in beta, but it’s stable enough to be on the App Store. After installing the app, you can scan your server’s QR code to add a VPN configuration to the main settings app.

You can then turn on a VPN connection from iOS settings or the WireGuard app. I’m surprised that it works so well. By default, you’ll remain connected to the VPN server until you switch it off. But you also can configure the app to disable the WireGuard connection when you’re browsing on the cellular network, for instance: 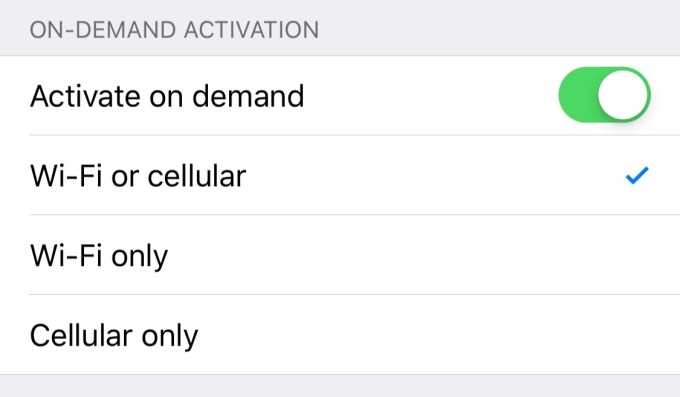 If you want to try out WireGuard yourself, I recommend building your own VPN server using Algo VPN. Don’t trust any VPN company that sells you a subscription or lets you access free VPN servers. A VPN company can see all your internet traffic on their own servers, which is a big security risk

Assume that those companies analyze your browsing habits, sell them to advertisers, inject their own ads on non-secure pages or steal your identity. The worst of them can hand to authorities a ton of data about your online life.

They lie in privacy policies and often don’t even have an About page with the names of people working for those companies. They spend a ton of money buying reviews and endorsements. You should avoid VPN companies at all costs.

If you absolutely need a VPN server because you can’t trust the Wi-Fi network or you’re traveling to a country with censored websites, make sure you trust the server.

How I made my own WireGuard VPN server