The App Store has historically led Google Play in terms of developers’ ability to monetize their apps, including consumer spending on in-app purchases and subscriptions. Today, a new report from Sensor Tower offers new insight as to what that means for app publishers’ businesses: It found that the App Store produced more million-dollar apps in 2018 than Google Play. Nearly twice as many, in fact.

According to the app store intelligence firm’s analysis, 164 publishers earned their first million dollars in net revenue on the U.S. App Store in 2018, which was nearly twice that of Google Play, where only 88 did. 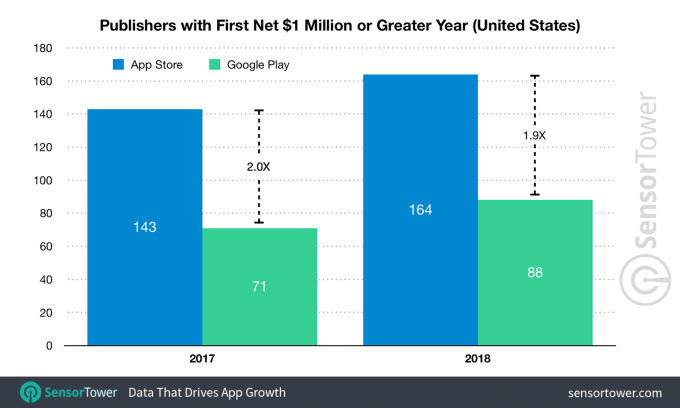 Naturally, a good chunk of the new million-dollar publishers were games, given that games contribute to the majority of app stores’ revenue. In 2018, 54 of the iOS App Store’s 164 publishers were games. In the lead was FoxNext Games’ Marvel Strike Force, which netted more than $15 million this year.

However, the percentage of the new million-dollar publishers that were games actually declined by 10 percent this year, as other App Store categories grew. For instance, the Lifestyle category grew from 5 to 10 percent and the Health & Fitness category went from 6 to 12 percent, year-over-year.

On Google Play, the majority (65 percent) of new million-dollar publishers were games, compared with just 33 percent on the iOS App Store. The social category, at 6 percent, trailed in second place.