Firefox Focus for Android and iOS is Mozilla’s privacy-centric mobile browser. Today, the organization stepped up this promise of keeping its users’ data private by adding to the browser a few new features that expand on this by adding a new privacy feature, as well as a few other new tools. 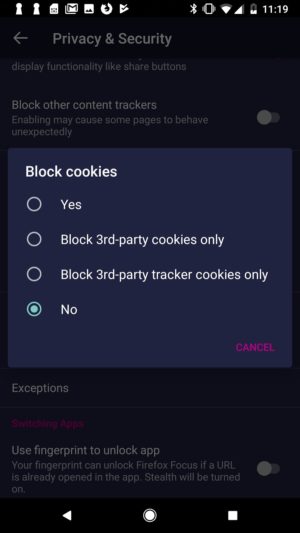 The main new addition here is support for Enhanced Tracking Protection. This feature first launched in Firefox for the desktop. It allows you to block cookies and trackers with a bit more granularity than was previously possible. Until now, Focus blocked all cookies by default. Now, however, you can choose to either continue doing that — but with the risk of sites breaking every now and then — or opt to allow third-party cookies or only third-party tracking cookies. Mozilla uses Disconnect’s Tracking Protection list to power this feature.

“This enables you to allow cookies if they contribute to the user experience for a website while still preventing trackers from being able to track you across multiple sites, offering you the same products over and over again and recording your online behavior,” Mozilla explains.

Mozilla also today announced that Firefox Focus now checks all URLs against Google’s Safe Browsing service to ensure that users don’t click on known phishing links or open other fraudulent sites. While using a Google tool may seem a bit odd, given that Firefox and Chrome are competitors, it’s worth noting virtually every browser makes use of Safe Browsing (and that Mozilla pulls in a lot of revenue from its search engine deal with Google).

In addition, iOS users who opt for Firefox Focus will now be able to get search suggestions, too, just like their friends on Android. There’s a privacy trade-off here, though, as everything you’re typing is sent directly to the likes of Google for offering you those suggestions. Because the focus of this browser is privacy, the feature is turned off by default, though.