Candid, a teeth aligner startup that aims to make straight teeth more accessible and more affordable than Invisalign, is evolving its direct-to-consumer business. In addition to its at-home impression process, Candid recently started enabling people to come into a physical office to get their teeth scans completed.

Today, Candid is opening physical storefronts in San Francisco, Austin, Columbus, Ohio and Santa Monica, Calif. This is in addition to the two locations in New York City, one in Boston and one in West Hollywood, Calif. By the end of next year, Candid aims to have 75 locations across the U.S.

Candid, which 3D prints its FDA-approved aligners, is designed for people who need mild to moderate orthodontic work. It costs $1,900 upfront or $88 per month over two years, while braces can cost up to $7,000 and Invisalign can cost up to $8,000.

In Candid’s physical locations, customers can get their teeth scanned and order aligners within 30 minutes. The studios are operated by Candid’s orthodontists and dental assistants. 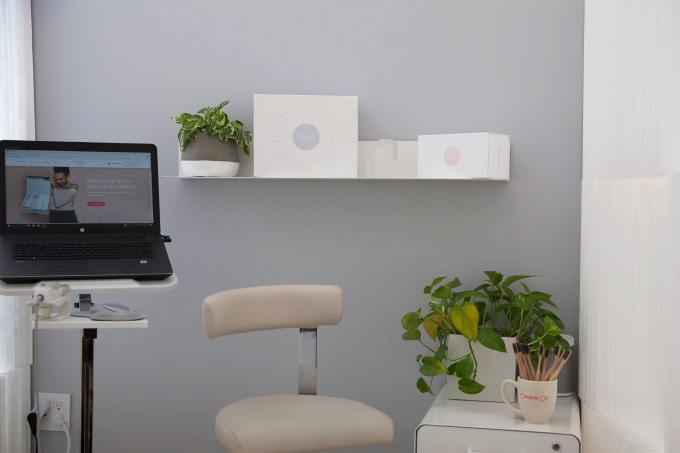 This is on the heels of Candid’s $15 million Series A round led by Greycroft last November. SmileDirectClub, a major competitor of Candid, raised $380 million in October at a $3.2 billion valuation.

But Candid doesn’t seem too fazed, having seen 15x growth year over year and expecting to potentially raise more funding in Q1 of next year, CEO Nick Greenfield told TechCrunch.

“The advantage is, if you don’t have access or live two hours away from the city, the impression kit is a viable and effective way,” Greenfield said. “But if you live in a city with a Candid studio, we recommend you come in for a scan.”

This is similar to Uniform Teeth’s strategy. Uniform Teeth, which raised $4 million earlier this year, is a clear teeth aligner startup that competes with the likes of Invisalign and Smile Direct Club. The startup takes a One Medical-like approach in that it provides real, licensed orthodontists to see you and treat your bite.

It’s worth noting that the in-person approach aligns more with the values of the American Association of Orthodontists, which has taken issue with the likes of SmileDirectClub and other teeth-straightening services that don’t require in-person visits with a licensed orthodontist.

As Candid grows and opens more physical locations, it wouldn’t be surprising if the company starts to try to funnel more people through the door than through the virtual shopping cart.

Tech startups want to go inside your mouth