The digital revolution has spawned “challenger” banks that operate entirely online, with no High Street presence. That phenomenon has taken off in Europe — particularly the U.K. — but over in Hong Kong, one of the world’s key financial hubs, the digital-only push is coming to the insurance industry.

Bowtie, a Hong Kong-based digital insurer, just announced a double milestone today: the company has become the first online-only operator to earn a license in the country while it has also revealed it has raised a HK$234 million ($30 million) Series A funding round.

Founded just over one year ago, Bowtie plans to offer a range of health-focused insurance products to Hong Kong consumers. It’ll launch in the first half of 2019; however, per the “virtual” insurer license issued by Hong Kong’s Insurance Authority (IA), it will not maintain any physical presence for consumers. That’s in stark contrast to the traditional industry, but the idea is to pass on cost benefits to consumers, provide strong offline customer service and offer a more transparent experience.

That vision already has some hefty weight behind it. Sun Life, the $20 billion global insurance giant, is one investor in that Series A round via its Hong Kong business unit. The other backer is Hong Kong X Technology Fund, a two-year-old program backed by the likes of Tencent founder Pony Ma and Sequoia China chief Neil Shen.

In an interview with TechCrunch, Bowtie co-founder and co-CEO Michael Chan stressed that his company will operate independently of Sun Life Hong Kong.

“We definitely like the value alignment,” he explained. “They have been very gracious and trusting, giving us a lot of management control.”

Chan clarified that there will be no sharing of customers or customer data. He painted a picture of a business — Sun Life — that’s curious about the potential of digital-only services and keen to see what a startup — Bowtie — can do with a leaner and more agile model. However, Chan was unable to confirm the size of Sun Life’s investment, and whether it owns a majority of the startup.

“We believe in Bowtie’s vision and commitment to enhancing the customer experience. Our investment complements our business, while enabling new distribution modes through the latest technology and digital innovations,” said Fabien Jeudy, CEO of Sun Life Hong Kong, in a press statement.

Indeed, there could be the potential for collaboration in the future, particularly since Sun Life has a strong presence in Asia Pacific, where its operations span Hong Kong, the Philippines, Japan, Indonesia, India, China, Australia, Singapore, Vietnam and Malaysia.

“If this business model makes sense, we could potentially collaborate on expansions,” said Chan, who spent nearly a decade with the likes of EY and PwC in the U.S. before returning to Hong Kong in 2015. 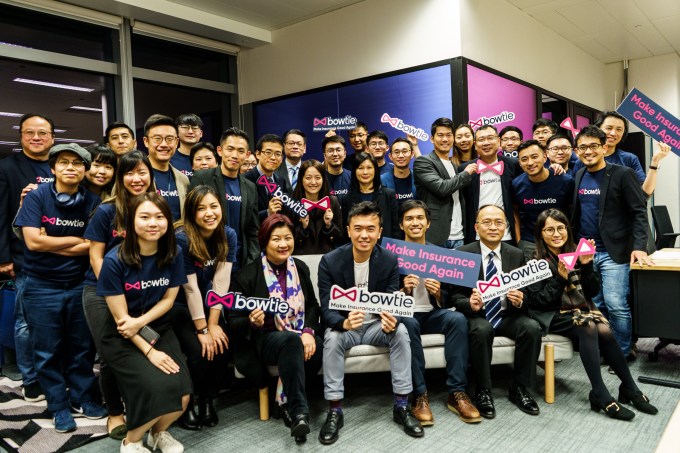 The Bowtie team at its office in Hong Kong

That’s looking a little far into the future for a company that has only just received the regulatory green light. When pushed on a potential expansion strategy, such as possible markets and entry times, Chan said there’s currently no information to share.

“It’s really very much a one step at a time approach,” Chan told TechCrunch. “Everything has to run smoothly” before the company considers moving outside of Hong Kong. Although he did acknowledge that “most of the growth” from the global insurance industry is happening in Asia.

Chan and fellow co-CEO and co-founder Fred Ngan met while working in the U.S. and, after both returning to their country of birth, they visualized the potential for a disruptive online play whilst working in consulting and other companies, Chan said. The IA’s “fast track” for virtual insurers was that spark. Announced in September 2017, the program quickly attracted more than 40 applicants — including global firms — and Chan said that while there were teething issues around accommodating online-only businesses, the process was rapid and as thorough as the awarding of a traditional license.

“Bowtie is all about delivering convenience through technology. Our market research shows Hong Kong consumers would love to be able to sign up for health insurance and submit a claim online, but the insurance industry has essentially operated the same way when it first began 300 years ago,” Chan said in a prepared statement.

Unlike others in the tech space across Asia, Bowtie doesn’t plan to locate its development team in other parts of the world, despite the challenge of hiring tech teams in Hong Kong.

“That’s fine for more established or mature models, but with the level of commitment we’ve given the regulator and our customers, I think that it’s best we are all here,” Chan said in an interview. “I truly believe there is good talent in Hong Kong.”

Where it has needed to, Chan said the company has hired from overseas, including Silicon Valley.

Certainly, the ongoing privacy snafus from U.S. tech companies and the polarizing politics mean that markets like Hong Kong have never been in a stronger position to lure new hires from Silicon Valley, New York, London and other Western hubs. Meanwhile, its insurance industry hires have from come from firms such as AIA, AXA, Chubb, Manulife, Prudential and Sun Life.