Under the guidance of Shalin Mantri, a former product lead at Uber for its advanced technologies group, Skip is gearing up to make its scooters smarter and improve its unit economics.

“When I think about opportunities to figure out our unit economics,” Mantri, who joined Skip from Uber in November, told TechCrunch, “it’s no secret now — it was probably a dirty secret of the industry, you know, a few months ago — that it’s hard to make money, and some of the biggest challenges to doing that are the cost of charging, the lifetime of the battery, the repair costs, the depreciation of these things being used in a fleet use case and the last is vandalism and theft, which is another big issue.”

What Mantri is referring to is the fact that investors, who have poured millions of dollars into electric scooter startups like Bird and Lime, are now pumping the breaks on funding due to the difficulty of the business. Some scooters reportedly only last about two months, which is not enough time to recoup the cost of purchasing the scooter. Perhaps that’s why Skip reportedly received $100 million in debt earlier this month. Skip, however, declined to comment on the lifespan of its scooters and its debt financing.

So in an effort to improve its unit economics, Skip is unveiling two new scooters. The first is one with a rear-facing camera and swappable battery, and the other has a retractable lock. In Washington, D.C., Skip recently started testing 200 scooters with rear-facing cameras to look for whether people are riding on the sidewalk, parking compliance and generally safe riding behavior. Today, Skip is rolling out some of these scooters in San Francisco.

The goal of the cameras is to learn more about rider behavior and parking compliance. Skip, however, has yet to determine what it will do with the data collected from the cameras.

“I think we’ll experiment with both approaches — which is providing sort of real-time feedback and saying, ‘hey, we think this isn’t parked correctly — please move it to the side,” or while you’re riding on the sidewalk, sound a little bell and that’s your signal to try to get off the sidewalk,” Mantri told TechCrunch. 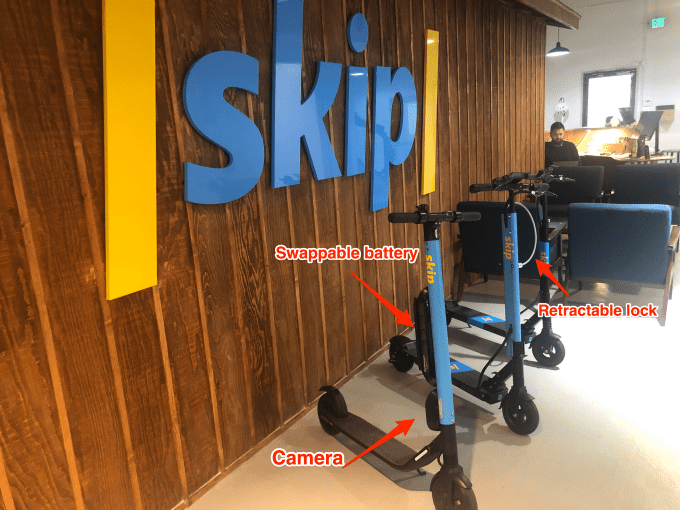 Another experiment is remotely slowing the vehicle if someone’s riding on the sidewalk. But Mantri says, if he “were to pontificate, it will be better for us to do something post-trip — just to ensure we’re not distracting or taking away from the base simplicity of experience and creating a positive tone with riders.”

The cameras are not always on, and only take snapshot photos during a rider’s trip. Riders will eventually have the option to opt-out of having the camera on during their ride. There is not currently an opt-out feature, but Skip says the cameras it will be testing in SF and D.C. will not take photos of riders in a way that could identify them.

“There are interesting moments where you may want to turn on the camera and wake it up,” he said. “I think we’re going to find these interesting use cases of stuff we’ll want to do but the caveat will be privacy of course — it’s really important.”

Meanwhile, theft and vandalism are rampant in the electric scooter space. This is where the locks come in. Skip has been testing these locks in San Francisco and plans to deploy more in January.

“It’s been a real problem,” Mantri said in response to a question about theft and vandalism. “I don’t have numbers at my fingertips to quantify that for you but it’s a lot. It’s getting a lot of our attention. Our hypothesis is that certainly locking and having a locking mechanism will help with this.”

Skip doesn’t expect this to be a catch-all solution, Mantri said, but the company thinks locking will surely help with parking compliance. Down the road, Skip will deploy a handful of scooters with a front-facing camera. The cameras are part of Skip’s larger vision to become an innovator in the electric scooter space.

“I think in scooters specifically, there’s a lot of room for product innovation,” he said. “And this is full stack innovation. This is hardware, sensor technology and software. The scooters need to be smarter and they need to be safer. I look at what is currently on the streets and it’s a version 0.1 of what that thing needs to be.”

And Mantri sees some of this innovation being informed from his work on autonomous vehicles at Uber. Many of the technologies Uber built in autonomous cars, Mantri said, are relevant for solving certain problems with scooters. For example, autonomous vehicle technology requires knowing where vehicles are, if they’re navigating properly and other types of system intelligence.

“That sort of system intelligence is not something that off-the-shelf scooters have,” Mantri said. “It’s just hardware, but that’s where the operating system sort of comes in, and people don’t really understand that or see that as much yet. It’s such a critical layer because that’s the first line of defense that even a human doesn’t have to get involved in.”

Skip also wants to bring more intelligence to repositioning the fleets in places that have high demand, and build a smarter task platform for the people who charge the scooters.

“We have the ability to work on things that bridge us to that future, but the point is, it’s not technology for technology’s sake,” Mantri said. “It’s about the unit economics and doing what we can to make the business work.”

At this point, Skip’s scooters are not totally custom, but Skip plans to eventually get to the point where it designs its scooters from the ground up. And as it experiments with different scooter types — ones with swappable batteries, locks, cameras, etc. — those learnings will contribute to Skip’s hardware product roadmap.