We hear a lot about India’s e-commerce battle between Walmart, which bought Flipkart for $17 billion, and Amazon. But over in the B2B space, Moglix — an e-commerce service for buying manufacturing products that’s been making strides — today announced a $23 million Series C round ahead of a bigger round and impending global expansion.

Founded in 2015 by former Googler Rahul Garg, Moglix connects manufacturing OEMs and their resellers with business buyers. Garg told TechCrunch last year that it is named after the main character in “The Jungle Book” series in order to “bring global standards to the Indian manufacturing sector.” The country accounts for 90 percent of its transactions, but the startup is also focused on global opportunities.

“The entire B2B commerce industry in India will move to a transactional model,” Garg told us in an interview this week. He sees a key role in bringing about the same impact Amazon had on consumer e-commerce.

“We think there’s an opportunity to start from a blank sheet and rewrite how B2B transactions should be done in the country,” he added. “The entire supply chain has been pretty much offline and fragmented.”

In a little over three years, Moglix has raced to its Series C round with rapid expansion that has seen it grow to 10 centers in India with a retail base that covers more than 5,000 suppliers and supplying SMEs.

Yet, despite that, Garg has kept things lean as the company has raised just $41 million across those rounds, including a $12 million Series B last year, with less than 500 staff. However, Moglix is laying the foundations for what he expects will be a much larger fundraising round next year that will see the company go after international opportunities.

“This [new] round is about doubling, tripling, down on India but also establishing a seed in a couple of countries we are looking at,” Garg said. 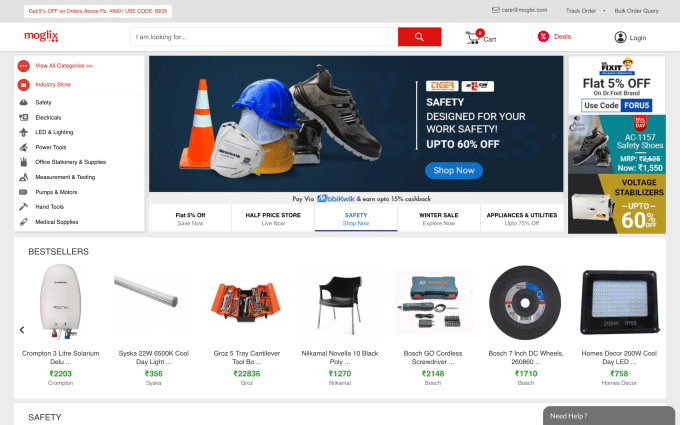 Adding further color, he explained that Moglix will expand its SaaS procurement service, which helps digitize B2B purchasing, to 100 markets worldwide as part of its global vision. While that service does have tie-ins with the Moglix platform, it also allows any customer to bring their existing sales channels into a digital environment, therein preparing them to get their needs online, ideally with Moglix. That service is currently available in eight countries, Garg confirmed.

Beyond making connections on the buying side, Moglix also works with major OEM brands and their key resellers. The basic pitch is the benefits of digital commerce data — detailed information on what your target customers buy or browse — as well as the strength of Moglix’s distribution system, tighter fraud prevention and that aforementioned digital revolution.

“Brands have started to realize [that digital] will be a very important channel and that they need to use both [online and offline] for crafting their distribution,” explained Garg.

Indeed, a much-cited SPO India report forecasts that B2B in India is currently a $300 billion a year market that is poised to reach $700 billion by 2020. Garg estimates that his company has a 0.5 percent market share within its manufacturing niche. Over the coming five years, he said he believes that it can reach double-digit percent.

While it may not be as sexy as consumer commerce, stronger unit economics — thanks in large part to different buying dynamics of business customers, who are less swayed by discounts — make the space something to keep an eye on as India’s digital development continues. Already, Garg paid credit to GST — the move to digitize taxation — as a key development that has aided his company.

“GST enabled good trust and accelerated everything by 2/3X,” he said.

There might yet be further boons as the Indian government chases its strategy of becoming a global manufacturing hub.