360 Finance, an online consumer loan platform that spun off from China’s anti-virus service giant 360 Group, has joined a raft of Chinese fintech companies to go public in the U.S. over the last two years.

360 Finance’s net loss widened to 572 million yuan, or $86.4 million, for the six months ended June 30 compared to 67 million yuan for the same period of 2017. The company notes in a regulatory filing that the jump was partly due to increased expenses from share-based compensation.

Meanwhile, the net income climbed from 60 million yuan in 2016 to 309 million yuan in 2017. 360 Finance drove most of its revenues from loan facilitation and post-origination services for consumers, although microcredit lending targeted at small enterprises will be a future focus, chief executive officer Xu Jun told TechCrunch. 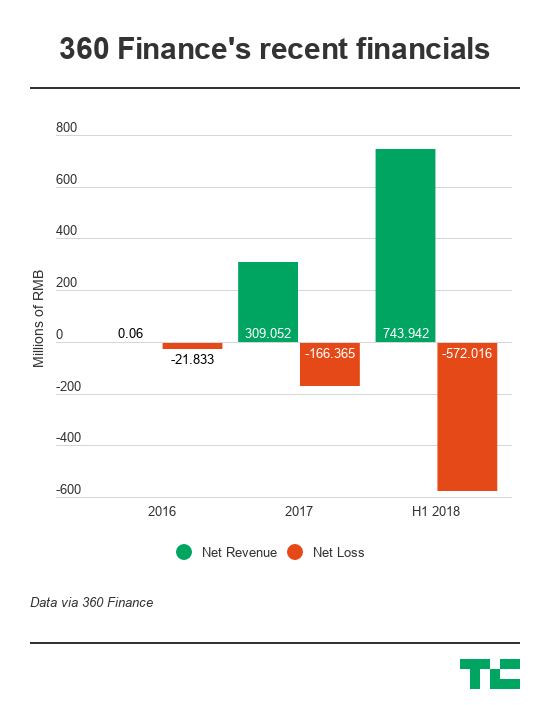 360 Group, of which founder and CEO Zhou Hongyi owns a 14.1 percent stake in 360 Finance, marks the first in a clutch of Chinese internet-focused companies — including Alibaba, Tencent, Baidu and JD.com — to see their consumer finance affiliates go public. Some of these services have mulled a flotation while others are pulling in fresh capital to fuel growth.

Ant Financial, the payments juggernaut controlled by Alibaba founder Jack Ma, reportedly postponed its U.S. IPO plans amid regulatory pressure and growing rivalry in China. Market watchers put its valuation at a whopping $150 billion after it snagged $14 billion from a Series C round in June.

WeBank, an online-only bank that counts Tencent as a major shareholder, has kept its valuation in the dark, but an auction in November revealed that it was worth about $21.3 billion.

JD Finance, the financial affiliate of Alibaba’s main rival, said in June that it didn’t have an IPO plan as it raised $1.96 billion at a valuation of nearly $20 billion.

In April, search titan Baidu sold the majority of its financial services — which it rebranded to Du Xiaoman — to a consortium of investors in a deal worth $1.9 billion.

360 Finance is vying for consumer attention in an online world dominated by larger peers that are capitalizing on the enormous user base of their allies. E-commerce behemoth Alibaba, for instance, had 666 million monthly active users on mobile devices as of September and Tencent’s WeChat messenger reached over 1 billion MAUs.

By comparison, 360 Group has about 500 mobile MAUs, which its financial partner believes could lead to an edge in marketing and risk management.

“As the largest cybersecurity company in China, 360 Security has an unfair advantage in fighting frauds,” said Xu.

That’s because 360 Security gleans reams of user behavioral data from its security browsers to determine borrowers’ “willingness” to repay loans.

“For instance, we flag those who often visit gambling sites or have installed a lot of personal lending apps,” said Xu. “On the other hand, companies such as e-commerce services only have insights into whether users are ‘able’ to repay by looking at their shopping history. The willingness to repay becomes very relevant when you are giving out smaller loans. People are usually able to repay 4,000 yuan [$580], but not everyone is willing to do so.”

The executive added that the 360 Security partnership also helps lower user acquisition costs, though he doesn’t want to rely on one marketing channel in the long run. Forty percent of the proceeds raised in the IPO will go toward promotion.

360 Group currently contributes more than 22.7 percent of the lending firm’s borrowers. App stores bring about two-thirds of the traffic while the remaining comes from news feed ads in popular apps like TikTok and user engagement on social media, according to the CEO.