Robinhood will rename and revamp its upcoming checking and banking features after encountering problems with its insurance. The company published a blog post this evening explaining “We plan to work closely with regulators as we prepare to launch our cash management program, and we’re revamping our marketing materials, including the name . . . Stay tuned for updates.”

Robinhood’s new high-interest, zero-fee checking and savings feature seemed too good to be true. Users’ money wasn’t slated  to fully protected. The CEO of the Securities Investor Protection Corporation, a nonprofit membership corporation that insures stock brokerages, tells TechCrunch its insurance would not apply to checking and savings accounts the way Robinhood originally claimed. “Robinhood would be buying securities for its account and sharing a portion of the proceeds with their customers, and that’s not what we cover,” says SIPC CEO Stephen Harbeck. “I’ve never seen a single document on this. I haven’t been consulted on this.”

That info directly conflicts with comments from Robinhood’s comms team, which told me yesterday users would be protected because the SIPC insures brokerages and the checking/savings feature is offered via Robinhood’s brokerage that is a member of the SIPC.

If Robinhood checking and savings is indeed ineligible for insurance coverage from the SIPC, and since it doesn’t qualify for FDIC protection like a standard bank, users’ funds would have been at risk. Robinhood co-CEO Baiju Bhatt told me that “Robinhood invests users’ checking and savings money into government-grade assets like U.S. treasuries and we collect yield from those assets and pay that back to customers in the form of 3 percent interest.” But Harbeck tells me that means users would effectively be loaning Robinhood their money, and the SIPC doesn’t cover loans. If a market downturn caused the values of those securities to decline and Robinhood couldn’t cover the losses, the SIPC wouldn’t necessarily help users get their money back.

Robinhood launches no-fee checking/savings with Mastercard & the most ATMs

Robinhood’s team insisted yesterday that customers would not lose their money in the event that the treasuries in which it invests decline, and that only what users gamble on the stock market would be unprotected, as is standard. But now it appears that because Robinhood is misusing its brokerage classification to operate checking and savings accounts where it says users don’t have to invest in stocks and other securities, SIPC insurance wouldn’t apply. “I have an issue with some of the things on their website about whether these checking and savings accounts would be protected. I referred the issue to the SEC,” Harbeck tells me. TechCrunch got in touch with the SEC, but it declined to comment.

Robinhood planned to start shipping its Mastercard debit cards to customers on December 18th with users being added off the waitlist in January. That may now be delayed due to the insurance problem and it’s announcement that it will change how it works and is positioned. 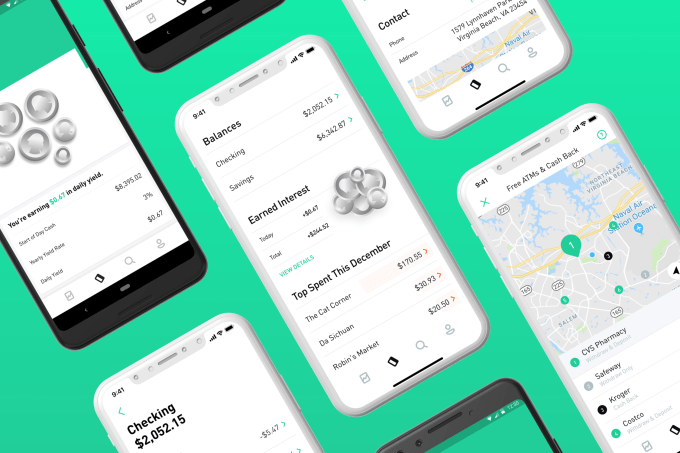 Robinhood touted how its checking and savings features have no minimum account balance, overdraft fees, foreign transaction fees or card replacement fees. It also has 75,000 free-to-use ATMs in its network, which Bhatt claims is more than the top five U.S. banks combined. And its 3 percent interest rate users earn is much higher than the 0.09 percent average interest rate for traditional savings, and beats  most name-brand banks outside of some credit unions.

But for those perks, users must sacrifice brick-and-mortar bank branches that can help them with troubles, and instead rely on a 24/7 live chat customer support feature from Robinhood. The debit card has Mastercard’s zero-liability protection against fraud, and Robinhood partners with Sutton Bank to issue the card. But it’s unclear how the checking and savings accounts would have been protected against other types of attacks or scams. 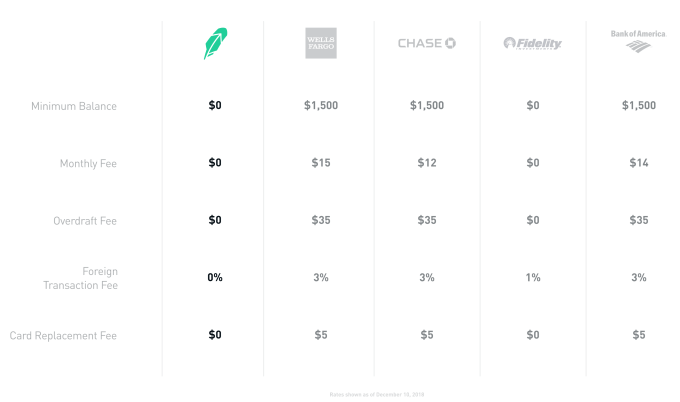 Robinhood was likely hoping to build a larger user base on top of its existing 6 million accounts by leveraging software scalability to provide such competitive rates. It planned to be profitable from its margin on the interest from investing users’ money and a revenue-sharing agreement with Mastercard on interchange fees charged to merchants when you swipe your card. But long term, Robinhood may use checking and savings as a wedge into the larger financial services market from which it can launch more lucrative products like loans.

That could fall apart if users are scared to move their checking and savings money to Robinhood. Startups can suddenly fold or make too risky of decisions while chasing growth. Robinhood’s valuation went from $1.3 billion last year to $5.6 billion when it raised $363 million this year. That puts intense pressure on the company to grow to justify that massive valuation. In its rush to break into banking, it may have cut corners on becoming properly insured. It’s wise for the company to be rethinking the plan to ensure it doesn’t leave users exposed or hurt its reputation by launching without adequate protection.

[Update 12/14/2018 9:30pm pacific: This article has been significantly updated to include information about Robinhood planning to change its checking and savings feature before launch to ensure users aren’t in danger or losing their money.]

[DIsclosure: The author of this article knows Robinhood co-founders Baiju Bhatt and Vlad Tenev from college 10 years ago.]