Prisma Labs, the startup behind the style transfer craze of a couple of years ago, has a new AI-powered iOS app for retouching selfies. An Android version of the app — which is called Lensa — is slated as coming in January.

It bills Lensa as a “one-button Photoshop”, offering a curated suite of photo-editing features intended to enhance portrait photos — including teeth whitening; eyebrow tinting; ‘face retouch’ which smooths skin tone and texture (but claims to do so naturally); and ‘eye contrast’ which is supposed to make your eye color pop a bit more (but doesn’t seem to do too much if, like me, you’re naturally dark eyed).

There’s also a background blur option for adding a little bokeh to make your selfie stand out from whatever unattractive clutter you’re surrounded by — much like the portrait mode that Apple added to iOS two years ago.

Lensa can also correct for lens distortion, such as if a selfie has been snapped too close. “Our algorithm reconstructs face in 3D and fixes those disproportions,” is how it explains that.

The last slider on the app’s face menu offers this feature, letting you play around with making micro-adjustments to the 3D mesh underpinning your face. (Which feels as weird to see as it sounds to type.)

Of course there’s no shortage of other smartphone apps out there on stores — and/or baked right into smartphones’ native camera apps — offering to ‘beautify’ selfies.

But the push-button pull here is that Lensa automatically — and, it claims, professionally — performs AI-powered retouching of your selfie. So you don’t have to do any manual tweaking yourself (though you also can if you like).

If you just snap a selfie you’ll see an already enhanced version of you. Who said the camera never lies? Thanks AI… 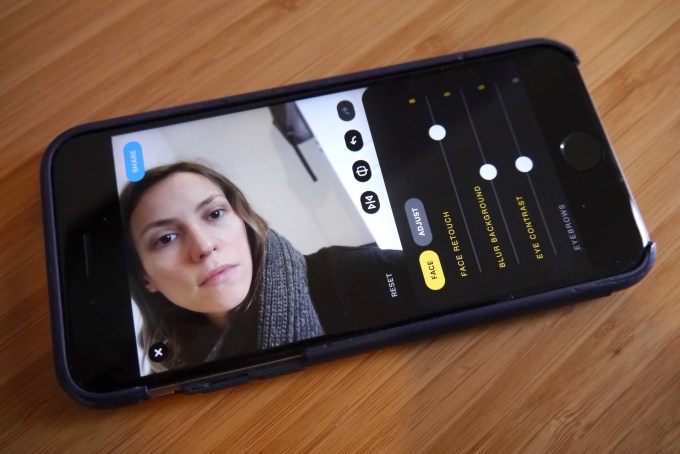 Lensa also lets you tweak visual parameters across the entire photo, as per a standard photo-editing app, via an ‘adjust’ menu — which (at launch) offers sliders for: Exposure, contrast, saturation, plus fade, sharpen; temperature, tint; highlights, shadows.

While Lensa is free to download, an in-app subscription (costing $4.99 per month) can let you get a bit more serious about editing its AI-enhanced selfies — by unlocking the ability to adjust all those parameters across just the face; or just the background.

Prisma Labs says that might be useful if, for example, you want to fix an underexposed selfie shot against a brighter background.

“Lensa utilizes a bunch of Machine Learning algorithms to precisely extract face skin from the image and then retouching portraits like a professional artist,” is how it describes the app, adding: “The process is fully automated, but the user can set up an intensity level of the effect.”

The startup says it’s drawn on its eponymous style transfer app for Lensa’s machine learning as the majority of photos snapped and processed in Prisma are selfies — giving it a relevant heap of face data to train the photo-editing algorithms.

Having played around with Lensa I can say its natural looking instant edits are pretty seductive — in that it’s not immediately clear algorithmic fingers have gone in and done any polishing. At a glance you might just think oh, that’s a nice photo.

On closer inspection you can of course see the airbrushing that’s gone on but the polish is applied with enough subtly that it can pass as naturally pleasing.

And natural edits is one of the USP’s Prisma Labs is claiming for Lensa. “Our mission is to allow people to edit a portrait but keep it looking natural,” it tells us. (The other key feature it touts is automation, so it’s selling the time you’ll save not having to manually tweak your selfies.)

Anyone who suffers from a chronic skin condition might view Lensa as a welcome tool/alternative to make-up in an age of the unrelenting selfies (when cameras that don’t lie can feel, well, exhausting).

But for those who object to AI stripping even skin-deep layers off of the onion of reality, Lensa’s subtle algorithmic fiddling might still come over as an affront.