San Francisco partially banned delivery robots because they obstructed pedestrians, so Postmates built one with eyes, turn signals and a mandate to yield. Serve is Postmates’ new cooler-meet-autonomous-stroller that it hopes can cut costs and speed up deliveries. The semi-autonomous rover uses cameras and Lidar to navigate sidewalks, but always has a human pilot remotely monitoring a fleet of Serves who can take control if there’s a problem. There’s even a “Help” button, touchscreen and video chat display customers or passers-by can use to summon assistance.

Serve will be rolling out in various cities over the next year, starting in Los Angeles. It does deliveries to customers that unlock its cargo hatch with their phone or a passcode, but it also can grab food from restaurants in congested areas and bring them to a Postmates dispatch hub from which delivery people can take packages the last mile. That could save Postmates money on delivery labor, but the company didn’t provide any information on how it might help transition couriers to other roles or careers.

“Somehow as a society we’re OK with moving a 2-pound burrito with a 2-ton car. All the energy is used to move the car, not the burrito, and there’s all the congestion it introduces” says Ali Kashani, VP of Postmates X special projects. So Postmates spent the last couple of years piloting autonomous rovers built by Starship and Robby before deciding only it had the on-demand experience to build the right bot. 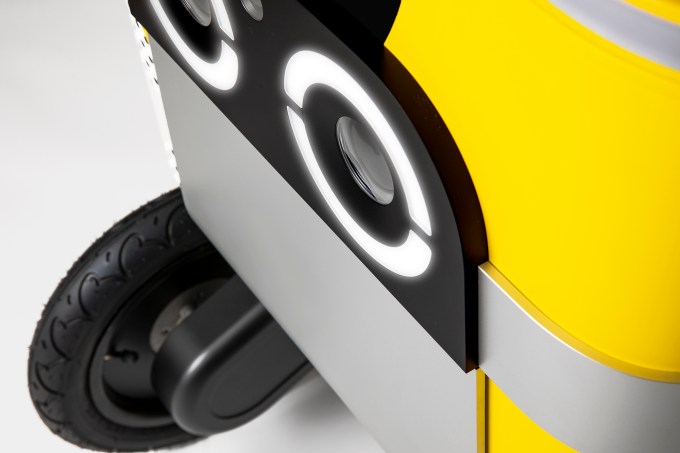 Ready to share the sidewalk with this little guy?

Serve can carry 50 pounds of goods for 25 miles on a single charge — enough to make around a dozen deliveries per day. Thanks to a low center of gravity achieved by building the battery into the bottom of the chassis, it’s less likely to get cow-tipped. It uses Velodyne Lidar and a NVIDIA XAVIER processor to tell where it’s going. A Postmates spokesperson tells me, of the scalability and efficiency of the rovers, that “ultimately we believe that there will be a world where goods move rapidly at almost zero cost to the consumer.”

“We took time to figure out what is the language for the rover and pedestrians to interact with each other. If a robot is at a sidewalk and wants to be able to cross the street, it needs to show its intent to cross,” Kashani tells me. Thanks to a light ring around the top with turn signals and eyes that can indicate where it’s trying to go, Kashani believes Serve can be a respectful and natural part of the urban environment. 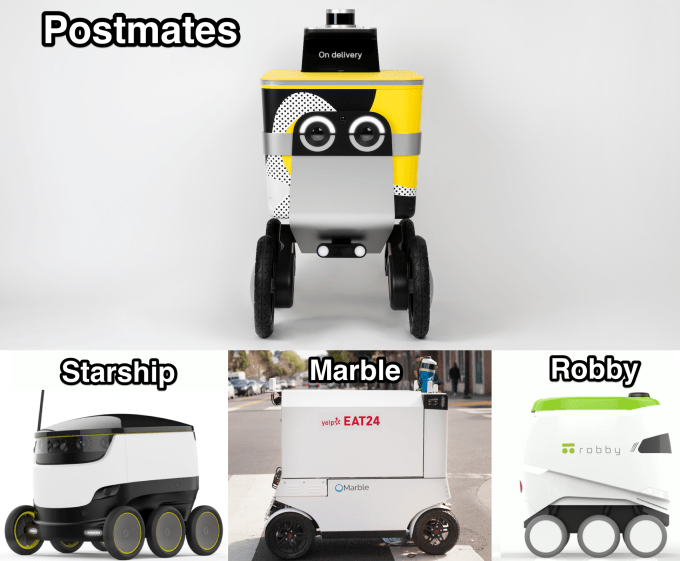 Postmates could offer Serve not only to its customers, but to companies like Instacart for which it handles outsourced deliveries. That business could pit Serve against delivery robot startups like $42 million-funded Starship, $10 million-funded Marble and $5 million-funded Robby.

Avoiding becoming an obstacle to seniors, children and people in wheelchairs will be critical if cities are going to allow robots like Serve to operate. In December, San Francisco nearly banned the bots by limiting companies to three robots each with only nine total in the city that are relegated to low-population areas, can’t travel more than three miles per hour and must be supervised remotely by humans.

Postmates tells me it’s been working with the SF board of supervisors, including Norman Yee, and a coalition of logistics companies to develop a regulatory framework for issuing permits allowing limited autonomous deliveries. Postmates’ permit application is under review by the City of SF. Postmates is working with SF’s Emerging Technology Working Group, local merchant associations and pedestrian safety groups to figure out how to balance innovative tools that could increase local retail sales and reduce traffic with the public’s need for right of way on the sidewalks.

There’s also the question of what happens to the labor Serve replaces. A Postmates spokesperson claims that Serve is about augmenting its fleet with super powers rather than replacing its fleet. The company does 4 million deliveries per month total in more than 550 cities, and some might not ever be within the scope of robots. But it’d be nice to see Postmates spin up some training courses or offer transitions to behind-the-scenes operations and customer service roles to deliverers that eventually feel the squeeze.

Interestingly, Kashani hinted at how Postmates might end up moving to an “Uber X, Uber Black Car” model where you’d pay more to have a human take your delivery upstairs and directly to your door, while you might pay less if you’re willing to grab your order from the Serve robot out on the curb. Essentially, Postmates Serve is poised to turn human delivery into a luxury.