Americans are regularly checking a second screen while watching TV, according to a new report from Nielsen that examined the media consumption habits of U.S. adults in the second quarter of 2018. Today, 28 percent of adults say they “sometimes” use a digital device, like a phone or tablet, while watching TV. A much larger 45 percent report they use a second screen “very often” or “always.”

The figures go to show how addicted U.S. consumers are to their smartphones — we don’t even put them down when tuning in to a favorite show or to watch a movie.

In fact, very few people — only 12 percent — reported they “never” use another device while watching TV. 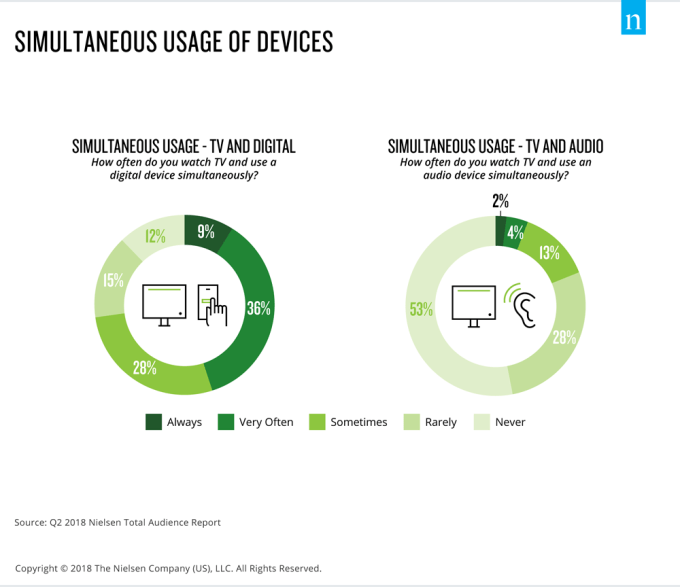 Of course, there are other reasons why some people want to actively use their smartphone while watching television, beyond the need to scroll through Instagram during the commercial breaks.

Sometimes, people may want to actively engage with other fans or participate in an online conversation if they’re watching a TV program or other event live. For instance, they may want to tweet out their support for their team during a football game, or may want to react in real time to a shocking turn of events on “Game of Thrones.”

Nielsen’s report noted this, as well. It said digital devices have actually impacted how we consume and interact with media today. That is, we’re using the second screen to augment the overall TV viewing experience, not detract from it.

In fact, most of the activities that take place on our devices while watching TV are related to the content.

Fifteen percent even use the device to direct them to a new program — meaning, they’ve tuned to different content after seeing something posted online. 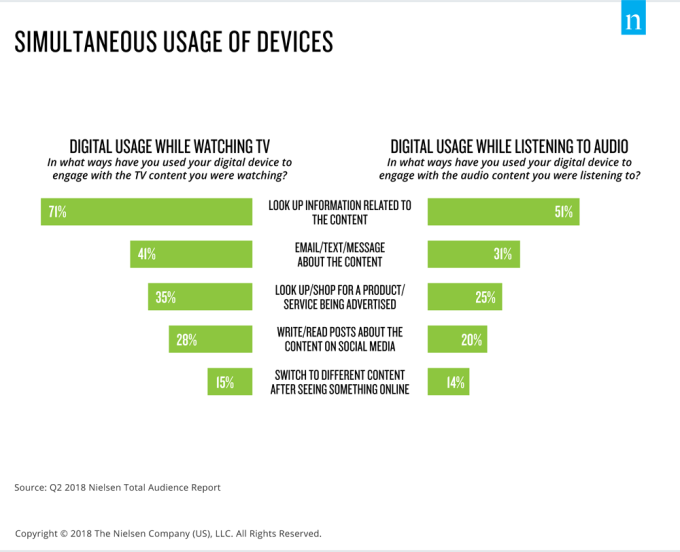 But this is a much smaller group, for obvious reasons — it can be difficult to process two different sources of information at the same time. Still, 6 percent said they often watch and listen to different content simultaneously — which is arguably an impressive, if very odd, skill to possess. But more than half said they would never use TV and audio at the same time.

The report also looked at how people consume media — which hasn’t changed as much as you would think, despite the increased use of digital devices.

Instead, “prime time” is still a popular time for watching TV, including live and time-shifted programming, as well as TV-connected devices like media players and game consoles. 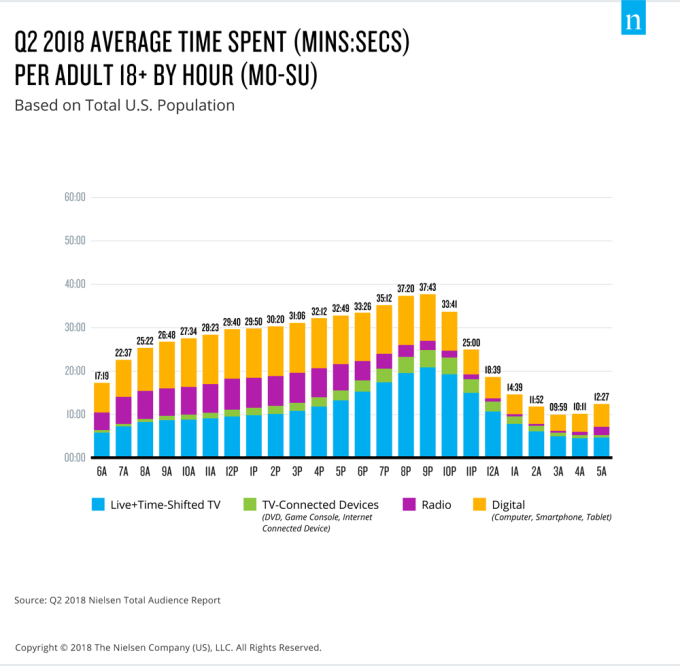 In Q2 2018, U.S. adults spent 38 out of a possible 60 minutes on media consumption from 9 PM to 10 PM, including live and time-shifted TV, TV-connected devices, radio and digital devices (computer, smartphone, tablet).

Indeed, 9 PM was also the peak TV hour, with more than half of consumers watching linear TV or interacting with TV connected devices like game consoles or streaming content through Roku, Apple TV, Chromecast or Fire TV.