The race to replace the mouse and keyboard has yielded a lot of weird tech, but as various hardware startups try to find the missing link between what we have now and some sort of embedded brain chip, we’re seeing some fascinating solutions surface.

New York-based CTRL-labs just announced its first developer kit that’s aiming to refresh how people interact with computers — an armband that can track a user’s finger movements by measuring electrical impulses. It’s not quite a brain controller, though in practice this type of tech can definitely feel like it’s reading your mind, taking minor finger movements and yielding a surprising amount of insight into the position of your hand and the pressure you’re applying on your finger tips.

CTRL-labs’ investors are betting big on the insight this unconventional interface type can deliver. The startup closed a $28 million Series A in May with funding coming from Vulcan Capital, GV and others.

The use cases for something like this seem to be a little up in the air at the moment, hence the interest in getting a developer kit out into the wild. There are some more obvious use cases in the VR space, but pushing a theoretical input type on an industry with theoretical appeal obviously isn’t the best basket in which to put a Series A.

The system (called CTRL-kit) is, indeed, a developer kit, so there hasn’t been the highest premium placed on miniaturizing all of the tech in the tethered system, but the company tells TechCrunch that the intent is definitely to get into a wrist-worn form factor like a smartwatch in the future. Watch a few of the tech demos and you’ll see what an interesting proposition this is for the wearable of the future. 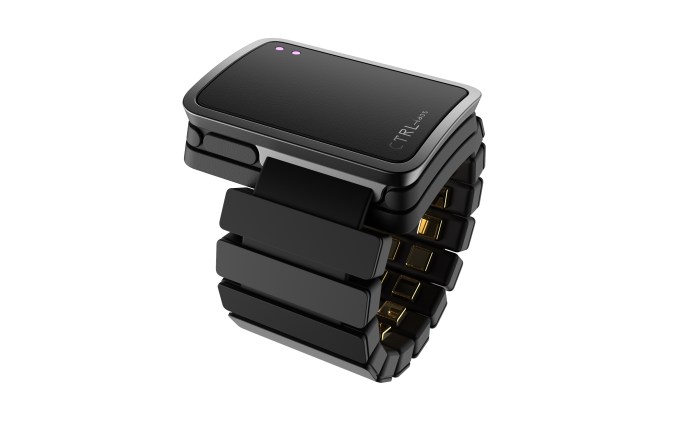 Think about the link between some lightweight glasses with a heads-up display and an Apple Watch-type controller that can parse hand gestures and you can see a more predictable endgame for this kind of tech.

Controlling augmented reality systems has always been a big UX question. Hand-tracking startups like Leap Motion have delivered very polished solutions that offer finesse but sidestep realistic user behaviors. Who’s going to wave their hands in front of their face while walking down the street? Microsoft has dumbed this down into optically tracked gestures like the “air tap” for HoloLens that let you select things in a pretty straightforward, yet cumbersome way. Magic Leap integrates a few input types into their system but seems to be pushing developers toward a physical controller while the current hardware is more focused on home use.

The company says they’re also intrigued by potential with the automotive industry and more conventional desktop applications. Like a good amount of technologies that are attractive for VR and AR tech, what CTRL-labs is building has an attractive endgame but suspect near-term utility. Startups like Thalmic Labs, now North, tried and failed to gain an audience for a consumer-grade motion-control armband like this. For the time being, the company expects a decent amount of developer attention to go toward using this tech for gaming.

The company says it plans to begin shipping the CTRL-kit in the first quarter of next year.