Amazon Alexa is gaining new capabilities, including support for location-based reminders and routines, the ability to call local businesses by voice and the ability to check your email, hands-free, on supported Alexa devices, among other things. These features were previously introduced this fall at Amazon’s Echo event in Seattle, alongside a host of other capabilities for the smart assistant, including things like hunches, cooking instructions, multi-step requests and more. However, not all the announced features had yet to roll out to Alexa device owners.

According to Amazon, Alexa will soon allow you to set reminders that are tied to a specific location. This feature is starting to arrive now for users in the U.S. and will continue to roll out over the next few weeks, Amazon says.

In the case where an Echo device is not available — like the office, perhaps — the push notification will be your alert.

Routines are a set of several commands you can kick off through a trigger phrase. For instance, you could currently say something like “Good morning” to have Alexa raise the blinds, turn on the coffee maker and offer you the news, weather and traffic reports.

Location-based routines, meanwhile, are those that trigger when you leave or arrive home or work.

That means you could have Alexa turn on your lights and play music when you’re a block from home, for example.

Along with the feature’s launch, you’ll also be able to save personalized locations to use with the location-based features, so you can more easily create these customized commands. 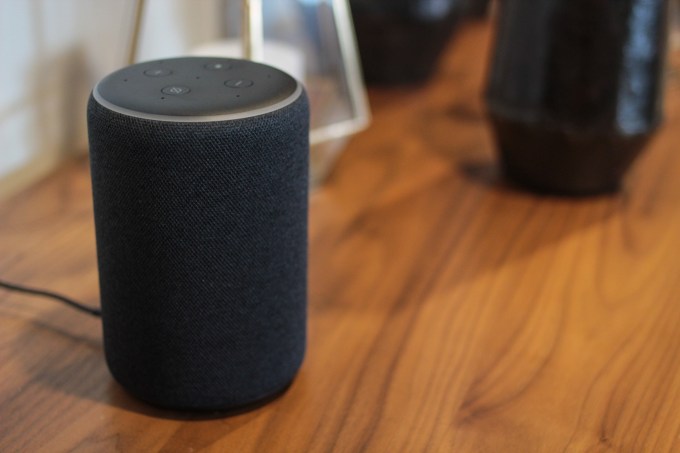 Routines are being upgraded in several other ways, too.

For starters, parents will soon be able to set up kid-friendly routines using their Echo Dot Kid’s Edition or any other Echo, Echo Dot or Echo Plus that’s FreeTime-enabled. For instance, a “good night” routine could have Alexa share a good night message, turn off the lights then play sleep sounds or music for an hour. Customizable routines will also be available to parents.

Similarly, adults will be able to take advantage of time-limited music in Alexa Routines with the update, too, and they’ll be able to include “wait actions” within routines — meaning pauses in-between taking action on various commands (e.g. “good morning” could turn on the lights, but wait 20 minutes before offering the news).

Routines can also turn on Do Not Disturb or stop the audio from playing.

Routines can now support Announcements, too — like a Dinner Time routine could include a command to announce to everyone it’s time to eat across all the household Echo devices.

And finally, routines will now support push notifications as part of the routine. That means you could program a routine to send a notification to a shared Alexa app that says “I’m on the way home” when you run your “I’m leaving work” routine.

Timers are being improved as well, as Alexa will soon allow you to add and remove time from timers with your voice. For instance, you can say “Alexa, add five minutes to my timer,” instead of having to cancel it and start a new one.

Alexa will work as a phone replacement of sorts, too. Alexa users can now search and call local businesses and restaurants by voice from their device, by saying things like “Alexa, what’s the number for Domino’s?” or “Alexa, where is the nearest Whole Foods,?” followed by “Call them,” when the answer is provided.

The new email feature was also announced in September, and essentially allows you to check your inbox by voice.

The feature works with Gmail, Outlook.com and Hotmail.com inboxes for the time being. To use the option, you first have to link your inbox to Alexa through the Alexa app. You can then ask Alexa to check and reply to emails, hands-free, by asking her to “check my email.” You can opt to read, reply to, delete or archive messages by voice, says Amazon.

Alexa doesn’t have to read your emails one-by-one, however. You can also say things like, “Alexa, do I have any emails from Sarah?,” for instance.

If there aren’t any emails from the person specified, Alexa can be used to set up a one-time notification so you get the message you’re waiting on when it arrives. Alexa is also aware of the email importance settings from the email providers, so you can manage the messages flagged as “important.”

The email option isn’t limited to one user, but allows everyone in the household to manage their own inbox, protected with a personalized voice PIN.

This feature is rolling out to U.S. users today, while others are launching in the days and weeks ahead in the U.S.