Much has been said about the SoftBank Vision Fund (SBVF), mostly in awe of the size of the investment vehicle.

It’s important to remember that the $100 billion number most often associated with the gargantuan fund is only a target. Today, however, the Vision Fund inched yet closer to that 12-figure goal as it continues to pour billions of dollars into technology companies around the world.

So far in 2018 the SoftBank Vision Fund has invested in more than 20 deals, accounting for over $21 billion in total investment. That sum didn’t all come from the Vision Fund of course — SoftBank’s Vision Fund typically invests alongside one or more syndicate partners who help fill out bigger rounds — but the amounts are nonetheless staggering. The chart below shows the Vision Fund’s investments since its inception in 2017. 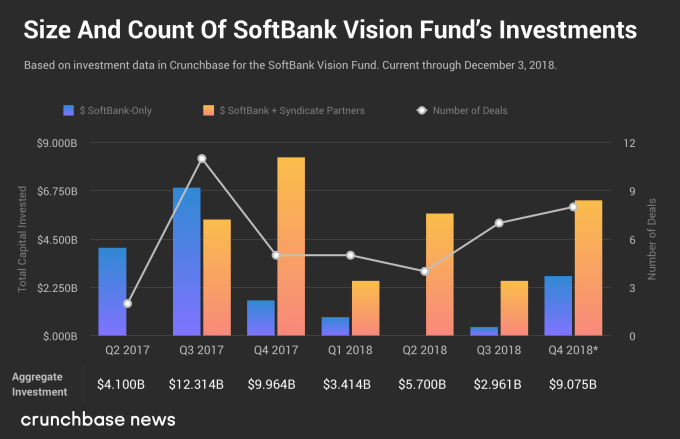 In an annual Form D disclosure filed with the Securities and Exchange Commission this morning, SBVF disclosed that it has raised a total of approximately $98.58 billion from 14 investors since the date of first sale on May 20, 2017. The annual filing from last year said there was roughly $93.15 billion raised from 8 investors, meaning that the Vision Fund has raised $5.43 billion in the past year and added six new investors to its limited partner base.

In a financial report from November, SoftBank Group Corp disclosed (p. 21, Note 1) it has invested an additional $5 billion in the fund, which is “intended for the installment of an incentive scheme for operations of SoftBank Vision Fund.” It brings SoftBank’s total contribution to $21.8 billion, in line with original targets.

The most recent Form D also cites six more limited partners. Crunchbase News presumes that the $430 million in new capital we cannot source back to SoftBank came from those new partners. SoftBank declined to comment on who they are.

One of the primary challenges an investor as big as the Vision Fund faces is sourcing capital. SoftBank doesn’t have a lot of choice about who it can take on as limited partners. To fill out a $100 billion fund (or something larger), government-backed investors are some of the only market participants with the financial wherewithal to anchor its limited partner base. And, sometimes, international politics and venture finance collide.

In November, TechCrunch reported that SoftBank would wait for the outcome of Khashoggi’s murder investigation before it decides on Vision Fund 2. New revelations this weekend close the window of reasonable doubt around bin Salman’s involvement in the murder.

This past weekend, The Wall Street Journal reported that the U.S. Central Intelligence Agency intercepted 11 messages sent between bin Salman and one of his closest aides, who allegedly oversaw the execution squad, in the hours before Khashoggi’s death. Amid mounting international and intelligence community consensus, though, the White House continues to defend Saudi Arabia.

Given these recent developments, it’s uncertain how SoftBank’s relationship with the Vision Fund’s principal backer will change going forward. Whether anything changes at all is itself an unknown at this point too.

SoftBank COO Marcelo Claure said there was “no certainty” of a follow-up fund back in mid-October.