Four months ago, when two commercial DJI-made drones loaded with 1 kilogram each of plastic explosive detonated during a speech from Venezuelan dictator Nicolás Maduro at a military event in Caracas, the world at large was introduced to the newest threat from our automated, dystopian present — cheap weaponized drone technology.

For Luke Fox, the founder and chief executive of WhiteFox Defense Technologies, it was simply the latest in a string of events proving the need for the kinds of services his company is developing. Something he calls “a highway patrol for the sky.”

From drug smuggling to reconnaissance and information gathering to terror attacks, unmanned aerial drones are no longer the provenance of state military and police actors, and are increasingly being used by criminal organizations to open new, aerial fronts in their operations.

“Drones are by far the biggest asymmetric threat that the U.S. faces,” says Fox. “Countries that don’t have a state-sponsored drone program are using them [and] it’s where you see people like ISIS are going.”

In the battle for Mosul in Iraq, ISIS flew more than 300 drone missions in one month, according to a talk given last year at CyCon by Peter Singer, a senior fellow and strategist at the New America Foundation. One-third of those were strike missions, representing the first time U.S. military faced an aerial attack since the Korean War.

The 24-year-old Fox began thinking seriously about the weaponization of commercial and consumer drone technology six years ago, when he founded WhiteFox Defense.

Creating the company was an extension of the way that Fox had been taught to think about the world as a child, he’s said. Fox grew up in an abusive foster home, raised by a mentally ill foster mother (who was, herself, a child protective service employee) who had adopted him and a number of mentally and physically challenged children.

“The reality I grew up in had my mind constantly looking for vulnerabilities. And instead of seeing these vulnerabilities as opportunities for crime I now had a whole color palette to choose from,” said Fox. “For example, when the world started going crazy over drones as recreational toys I saw that they could be used as weapons or for crime, and this insight into the criminal mind inspired a company that defends the country from drones.”

Fox was adopted from foster care by the librarian of his local Sacramento-area high school, tested out of college and went on to a community college before enrolling in California Polytechnic University in San Luis Obispo.

He began working with drones while in school and credits that introduction to the technology as the inspiration for starting WhiteFox.

“We previously started out in drone manufacturing, starting out in high-performance drones for specialty clients and research organizations. We needed affordable drones that were highly capable,” said Fox. “Making a highly capable drone that was very affordable attracted some very shady people. And, realizing that there was only so much we could control, it brought us to ask what is out there? At the time, the only thing to counter drone-related attacks was large missiles shooting down large Iranian drones.”

WhiteFox currently has three products either in development or on the market. Two have already been released to a select group of customers in different industries and the entire suite will be launched at the beginning of next year, according to Fox.

Without going into specific details of how the technology works, Fox said that WhiteFox Defense systems can detect, identify and mitigate unauthorized drones flying in a particular airspace.

“It’s not jamming or blocking drones or catching them out of the sky,” says Fox. Rather the idea is to provide situational awareness and identify the type of threat that an errant drone represents — whether the operator is, in Fox’s words, “clueless, careless or criminal.”

What Fox would say is that his company has developed a technology that’s based on identifying and differentiating between drones based on their unique radio frequency signatures. That product for identifying drones operating in a space is complemented by a second technology offering that allows WhiteFox to take control of the unauthorized drones in an airspace. 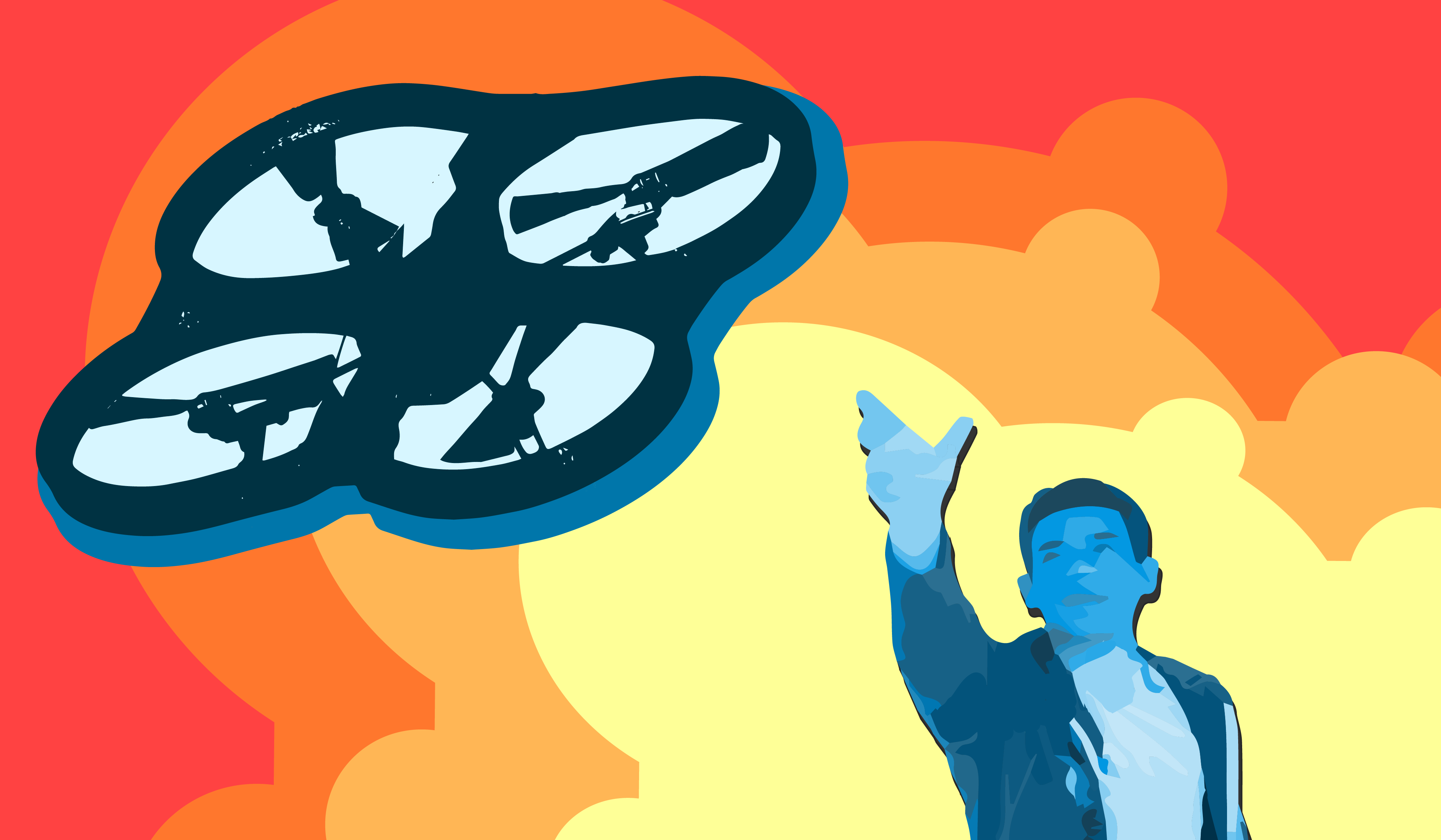 WhiteFox isn’t alone in its attempts to create anti-drone technology. According to some industry statistics there are at least 70 companies working on drone defense technologies, with solutions ranging from deploying other drones to capture unauthorized UAVs to jamming technologies that will block a drone’s signal.

Earlier this year, Airspace Systems raised $20 million for its kinetic (drone versus drone) approach to drone defense, while Citadel Defense raised $12 million and Dedrone pulled in $15 million for their drone-jamming technologies.  And last year, SkySafe raised $11.5 million for a radio-jamming approach similar to WhiteFox, which forces unauthorized drones out of restricted airspace while permitting authorized drones to still fly.

“As​ ​the​ ​adoption​ ​of​ ​consumer​ ​drones increases,​ ​we​ ​believe​ ​it​ ​is​ ​vital​ ​for​ ​an​ ​ambitious​ ​and​ ​effective​ ​defense​ ​platform​ ​to​ ​emerge,” said Alex Rubacalva, a partner at Stage Venture Partners and an early investor in WhiteFox Defense.

In all, drone-related startups have raised nearly $2 billion in the last eight years, according to data from Crunchbase, pulled at the beginning of 2018. Roughly $600 million of that investment total has come in 2017 and the early part of 2018 alone, the Crunchbase data indicated.

Technologies like SkySafe and WhiteFox are about more than just defending airspace from malicious actors.

“Counter-drone technology is not just about securing spaces from drones and preventing bad things from happening,” says Fox. “It’s about enabling drones to be used in the right way.”

The applications extend far beyond military uses. In fact, Fox’s technology is already being adopted by prisons around the U.S. and, indeed, anywhere airspace usage can be considered sensitive.

“Someone described as the largest delivery operations in the world is happening at prisons,” said Fox. “You have a lot of money behind buying a DJI at Best Buy and loading it up with heroin, with drugs, with weapons, with even Chinese food that was smuggled in. We found that there were drones smuggling in contraband every single day.”

WhiteFox recently conducted a survey with an undisclosed large public prison system in the United States to study just how pervasive a problem drone-smuggling was among its prison population. What the prison saw as one drone a week flying into restricted airspace became a realization that multiple drone flights per day were occurring in attempts to smuggle contraband onto prison grounds.

Operations extend far beyond police and military applications though, according to Fox.

During the California wildfires, rescue operations were halted thanks to unauthorized usage of drones by civilian operators who wanted to capture footage of the disaster. Their actions potentially risked the lives of not only rescue workers but of the citizens they were trying to save and the fire crews attempting to control the worst wildfire in the state’s history.

“This is one of the fascinating things about this industry as a whole,” says Fox. “It’s not that drones are bad and scary and we need to do something about them. If we’re going to embrace this technology as a society we need to be able to safely integrate it into society.”

From its initial deployments, WhiteFox was able to convince investors to funnel $12 million into the company to finance its expansion plans.

“WhiteFox’s customers are armed with a highly robust and scalable-for-deployment technology​ ​platform​ ​that​ ​addresses​ ​the​ ​increased​ ​threat​ ​of​ ​hostile​ ​drones​ ​and enables​ ​greater​ ​control​ ​of​ ​their​ ​airspace,” said Jeff Bocan, a partner at OKapi Venture Capital, in a statement.​ “Crucially, WhiteFox’s technology also offers customers the ability to protect against reckless drone use, while enabling “friendly” drones to fly freely — all without any human intervention.”