Iliad, the telecom company behind Free, just unveiled a new Freebox at a press conference in its office. This is somewhat significant news for French startups as French billionaire Xavier Niel is also a startup investor through Kima Ventures, the owner of Station F and the creator of a school called 42.

When Free unveiled the first Freebox back in 2002, it was the first French internet service provider to offer a triple play service with DSL internet, unlimited calls to French landline phones and television for $34 per month (€29.99).

But things have changed drastically since then. OTT services, such as Netflix or Molotov, as well as multimedia players from Apple or running Android, are competing directly with those boxes.

Free is now at a turning point. It has been relentlessly losing subscribers for the past year and its shares have been down around 40 percent in just a year. 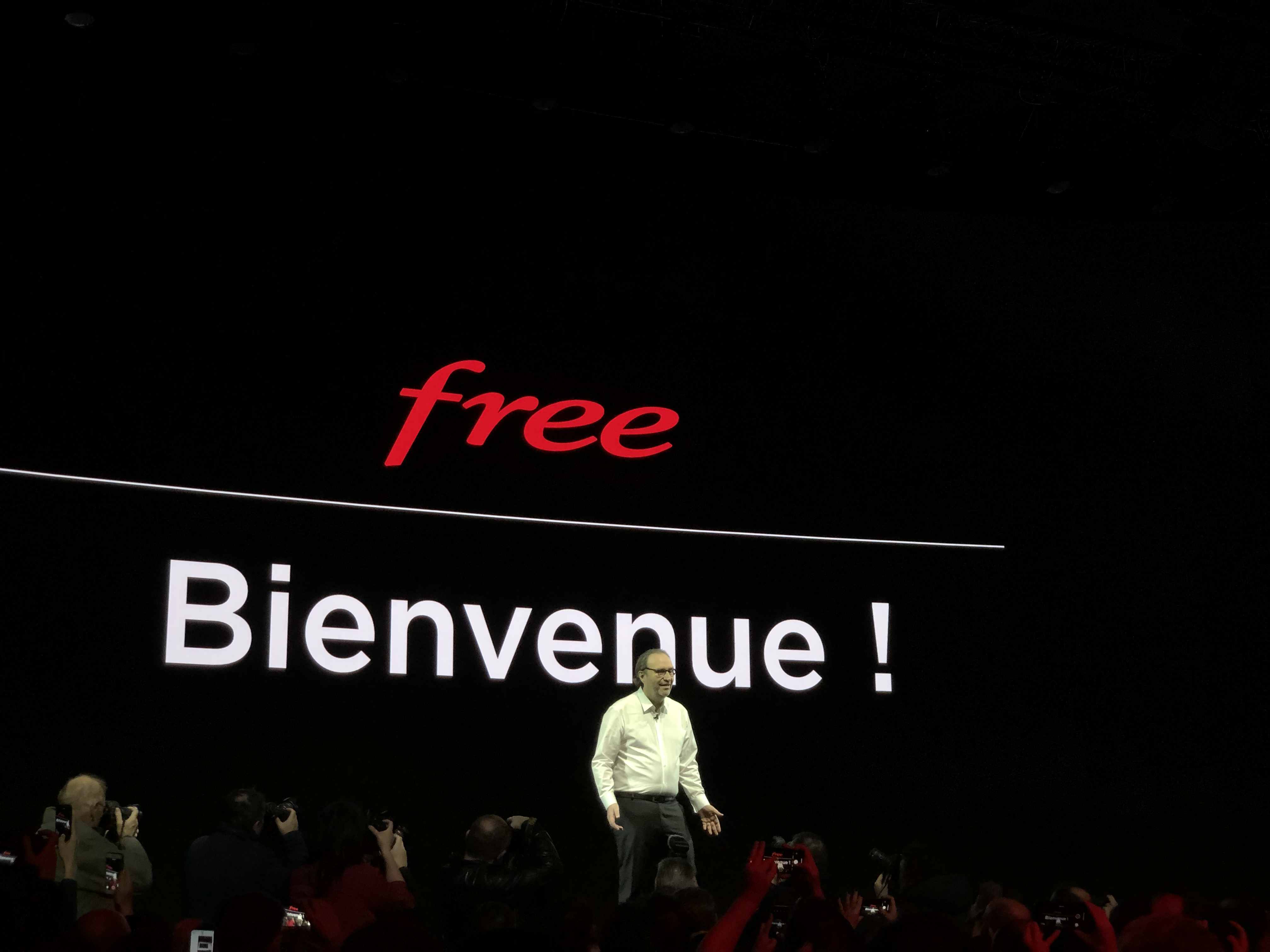 In other words, Xavier Niel needs this Freebox to be a success to attract new subscribers, increase the average revenue per user and prove that you can compete with traditional telecom companies by leveraging technology.

The result is the Freebox Delta, a compilation of many different technologies into a single offering. It literally looks like a delta and features Devialet speakers, Sigfox connectivity, Amazon Alexa, ZigBee connectivity for connected objects and more.

“All of this would cost thousands of euros but we’re making it accessible,” Niel said.

By choosing a premium positioning, Free needs to prove that it cares about its network. You can now get as much as 10 Gbit/s using a fiber connection and the new Freebox — you’re then restricted to Gigabit Ethernet ports though.

But if you live in the countryside, the Freebox now seamlessly aggregates DSL with a 4G LTE connection, which gives us a glimpse at the 5G future around the corner.

From a simple modem to a home hub

The modem part of the package comes with a 1TB hard drive. You can put up to 4 hard drives and use RAID to create a tiny little NAS with your Freebox. It comes with two powerline network adapters that you can plug into your modem using a single USB-C cable — the adapter acts as the power brick.

The set-top box part is a 4K HDR multimedia box with a homemade operating system. More importantly, it is also a Devialet speaker. Devialet has been working on high-end speakers with a simple goal — zero background noise, zero saturation and zero distortion. Those speakers cost a tiny fortune.

Niel is an investor in the French startup, which is why it makes sense to integrate Devialet’s algorithms and chipsets into the Freebox. There are 6 speakers and it should replace your TV sound bar quite easily.

You can stream music using Wi-Fi (AirPlay), Bluetooth and Spotify Connect. If you want something else, there are Deezer, Qobuz, YouTube, Dailymotion and Twitch apps as well — but you’ll need to turn on the TV to access those.

The Freebox Delta also acts as a voice assistant. There’s a hardware switch to enable the microphones. You can then use a homemade assistant called “Ok Freebox” to control the device. And you can use Amazon Alexa for more complicated queries.

I wasn’t impressed by the integration of two voice assistants. It’s going to confuse a lot of people who are going to say “Alexa, turn on Arte” instead of “Ok Freebox, turn on Arte.” The TV interface has also been redesigned and now looks a lot like Molotov.

Subscribers get the cheapest Netflix subscription tier for free and can upgrade for an extra €3 or €6 per month. Basic Canal channels are included. Newspaper and magazine subscriptions are included through LeKiosk.

With the new device, Free is betting on connected objects. The Freebox Delta is connected to the Sigfox network and can control ZigBee objects, such as Philips Hue lights and Somfy blinds.

New subscribers get a bunch of sensors to get started. You get a connected camera, a door sensor, a motion detector and a tiny remote. You can buy more accessories in the future. Your Freebox can then alert you if there’s anything wrong in the Freebox app. 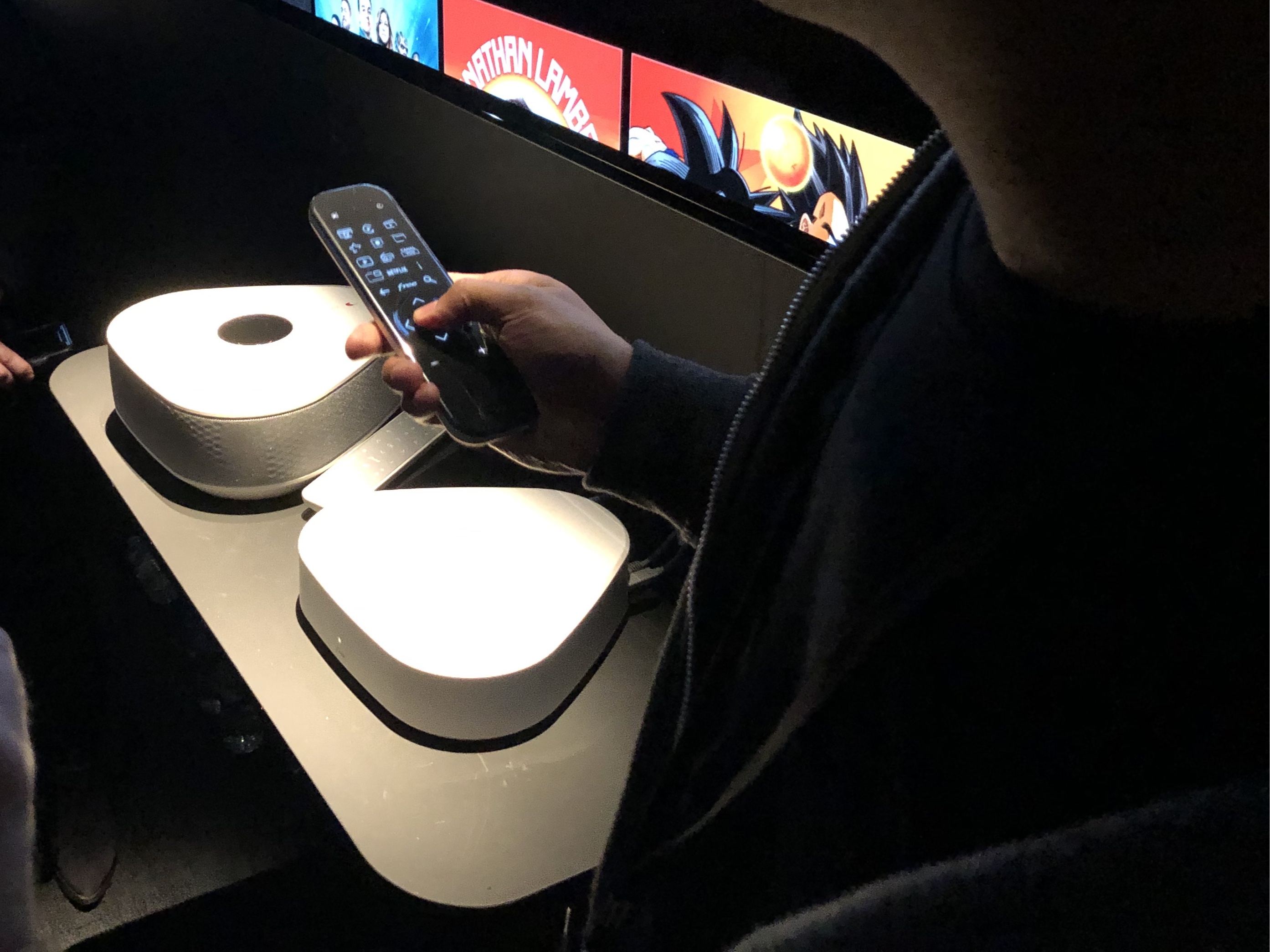 More interestingly, the Freebox comes with two remotes — a classic remote and a remote with a touchscreen. The interface of the smart remote changes depending on what you do, which reminds me a lot of Prizm. And it turns out that the team behind Prizm joined the company, according to a source. But they haven’t had time to work much on that yet.

Free has suffered a lot from competition. After undercutting everyone, competitors have caught up and now offer similar services for around the same price.

In order to differentiate its offering, Free is going premium.

Orange has always attracted premium subscribers thanks to heavy network investments and premium pricing. Free wants to join Orange on this segment and leave Bouygues Telecom and SFR behind.

Free is also launching a new, cheaper Freebox today, the Freebox One. But it’s clear that the company wants to talk about its flagship offering. It costs €50 per month to subscribe to the top tier, and the company wants you to pay for the device.

Instead of lending you a Freebox Delta, it costs €10 per month over 48 months. You can then keep it forever. Niel hinted at bigger ambitions. Eventually, the company wants to sell the Freebox Delta to consumers in other countries, even if they can’t subscribe to Free.

Overall, the new Freebox feels like a melting pot of technologies (a bowl of Chocapic, as French readers would say). Only Free knows the startup ecosystem so well to put all of those technologies together.

Now, let’s see if Free has what it takes to become a full-fledged consumer electronics company. It’s an ambitious bet. 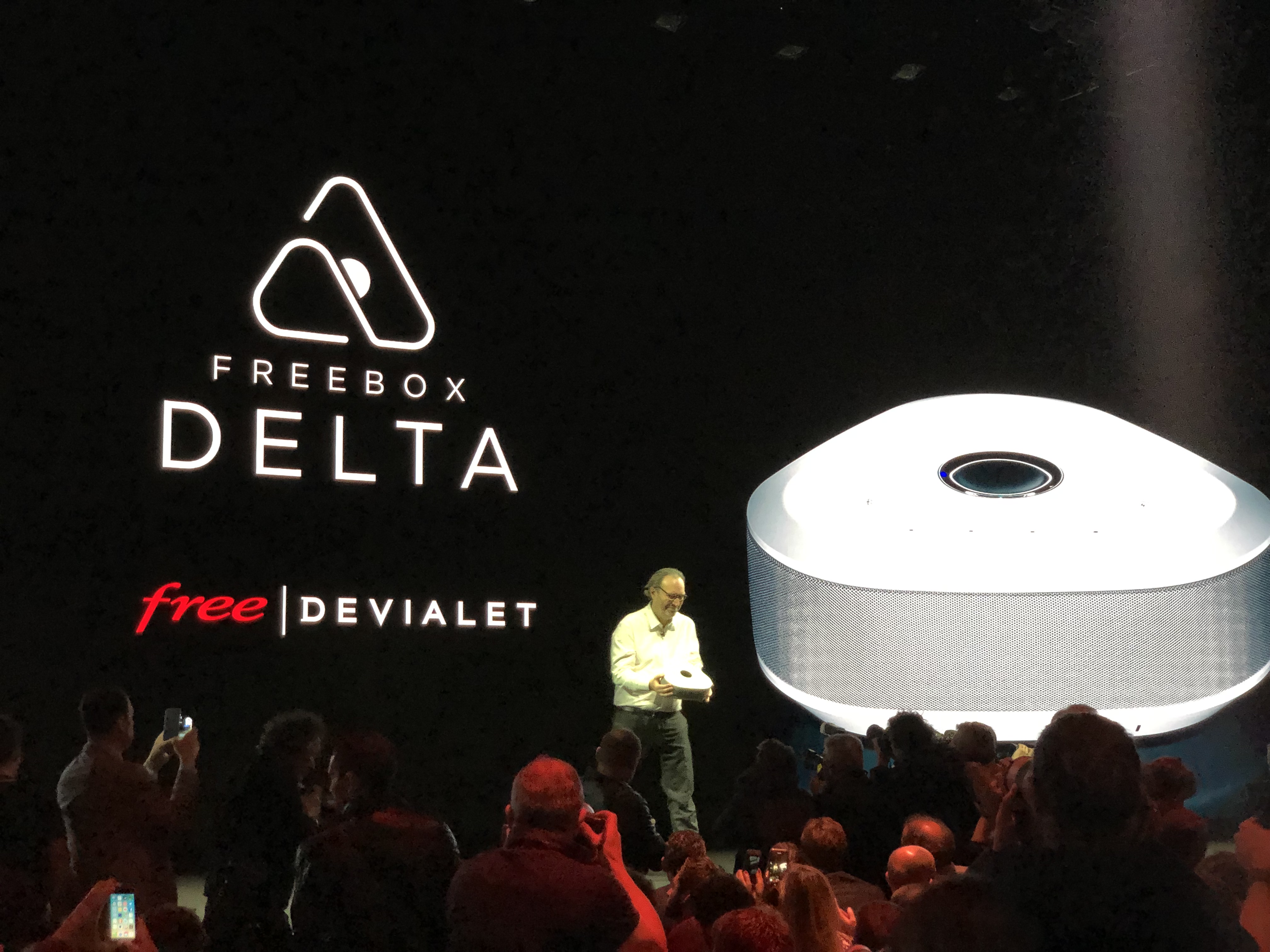