Uber Eats has effectively invented its own native ad unit. Uber confirmed to TechCrunch that a test quietly running in markets around India allows restaurants to bundle several food items together and sell them at a discounted price in exchange for promoted placement by Uber Eats in a featured section of local “Specials.” In some cases, restaurants foot the cost of the discount, while in others Uber pays for the discounts.

The Uber Specials feature demonstrates the massive leverage awarded to food delivery apps that aggregate restaurants. Users often come to Uber Eats and its competitors without a specific restaurant in mind. Uber can then point those customers to whichever food supplier it prefers. The suppliers in turn will increasingly compete for the favor of the aggregators — not just in terms of food quality, speed and review scores, but also in terms of discounts. The aggregators will win users if they offer the best deals; creating a network effect makes restaurants more keen to play ball. 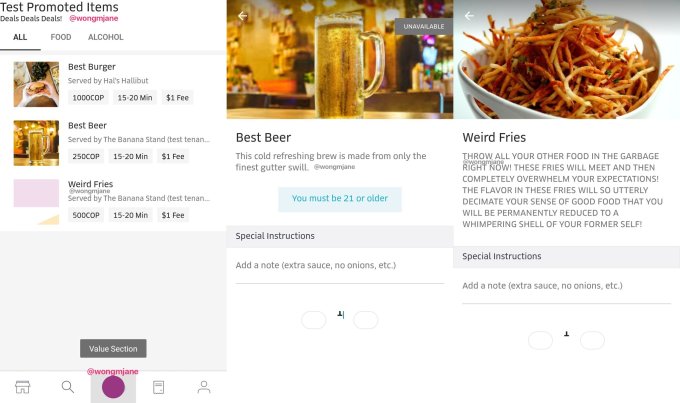 TechCrunch first learned of Uber’s ambitions in the space from a mock-up of the Promoted Items Value Section feature spotted in its app by mobile researcher and frequent TC tipster Jane Manchun Wong. The fictional food items included “Best Beer” that “is made from only the finest gutter swill” and “Weird Fries” that “will so utterly decimate your sense of good food that you will be permanently reduced to a whimpering shell of your former self!” This jokey text that seemingly was never meant for public viewing also noted that the fries are so good you should “throw all your other food in the garbage right now!” Uber assured us these weren’t real.

But what it did confirm is that the discounts for promoted placement test is live in India. “We’re always experimenting with ways to make it easier to find your favorite foods on Uber Eats,, according to a statement provided by an Uber spokesperson.

The feature allows restaurants to create a bundled meal at a certain price point, such as a chicken sandwich, french fries and a drink at a price that’s less than the sum of its parts. The company tells me the goal is to take the friction out of ordering by giving people pre-set meals at a better price prominently available in the app. Attracting more customers that have plenty of other options could offset the discount. Businesses could also use it to bundle high-margin items, like soft drinks, with meals, or to get rid of overstock.

It’s already common for restaurants to make “specials” out of food they have too much of. That butternut squash ravioli might only be featured because they can’t get rid of it. In that sense, you could think of Uber Specials as the inverse of surge pricing. When supply is too high, restaurants can offer discounts to gain more demand. It’s also not far off from Google Search’s keyword ads where business pay for more visibility.

Uber wouldn’t discuss whether it plans to bring the strategy to other markets, but it makes sense to assume it’s considering expansion. Done wrong, it could look a bit like Uber Eats is pressuring restaurants to surrender discounts if they want to be discoverable inside its app. If restaurants within Uber Eats get into heated competition to offer discounts, it could drive down their profits. But done right, Specials could look like a triple-win. Restaurants can offload surplus and bundle in high-margin items while scoring new customers from enhanced placement, customers get cheaper food options and Uber Eats becomes people’s go-to app for easy-to-order discounted meals.