EBay this morning announced it’s expanding the capabilities of its eBay Authenticate service — its luxury goods verification program — to now include luxury jewelry. Timed to coincide with the launch, eBay is also listing more than 45,000 luxury jewelry items for sale, including both diamonds and other gemstones that have been verified by professional jewelers.

The eBay Authenticate service first launched just over a year ago, as a means for eBay to better compete with the growing number of luxury goods resale sites like The RealReal and others, which verify sellers’ goods as authentic, so shoppers can feel comfortable buying.

Initially, eBay was only focused on handbags from high-end brands like those from Louis Vuitton, Chanel, Hermes, Gucci, Prada, Burberry, Dior, Fendi, Balenciaga, Goyard, Celine and Valentino. In September 2018, however, it expanded the program to authenticate luxury watches as well, like those from Rolex, Patek Philippe, Omega, Audemars Piguet, Breitling and Panerai.

The company says the decision to move into jewelry was the logical next step, given the velocity of jewelry sales it sees. Every day, eBay sells 50,000 jewelry items on its site — or more than 2,000 per hour — and it sells one diamond ring per minute. 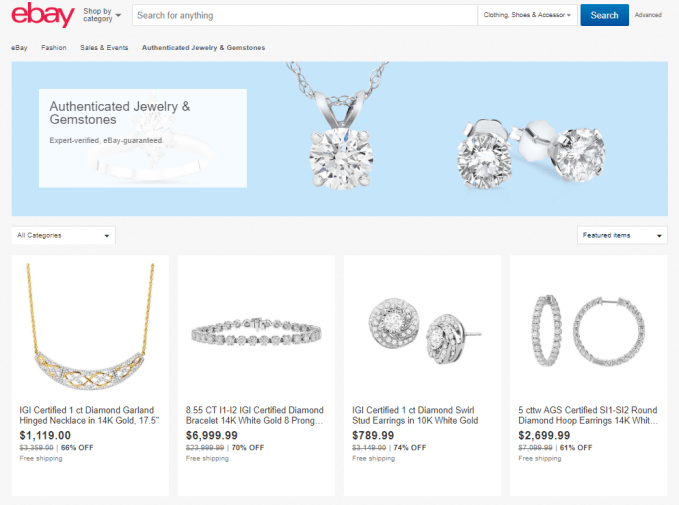 The first luxury jewelry authenticated through the expanded service include engagement and wedding bands, loose diamonds and gemstones, and fine, vintage and fashion jewelry. The items range in price from $250 to more than $20,000 and are sourced by more than two dozen eBay top sellers.

Like its other verification programs, the jewelry is vetted by third-party authentication experts before being listed.

EBay touts its competitive fee structure as a reason to turn to eBay Authenticate instead of rival sites like The RealReal or Poshmark, with either matching or reduced fees in addition to handling the professional listing and photos.

The company says it’s not disclosing the fees for the the pre-approved top-rated sellers who are part of the program for the jewelry category. As of right now, it’s along the same lines as the watches offering and not open to casual sellers, eBay tells TechCrunch.

For handbags, any seller can send in their handbag for a 20 percent final value fee. A promotion is running through January that brings that fee to 10 percent, however.