Black Friday wasn’t just a boon for e-commerce retailers, it helped the mobile app stores break new records, too. According to a new report from Sensor Tower, the combined consumer spending across the U.S. Apple App Store and Google Play on Black Friday 2018 reached $75.9 million — a record for the most ever spent in a single day on both stores.

The App Store accounted for most of that figure, however, with U.S. consumers spending a record $52 million on Black Friday. That’s a 31.6 percent increase in spending over last year’s shopping event, when consumers then spent $39.5 million.

The App Store’s $52 million was more than double the $23.9 million spent on Google Play during the same time. 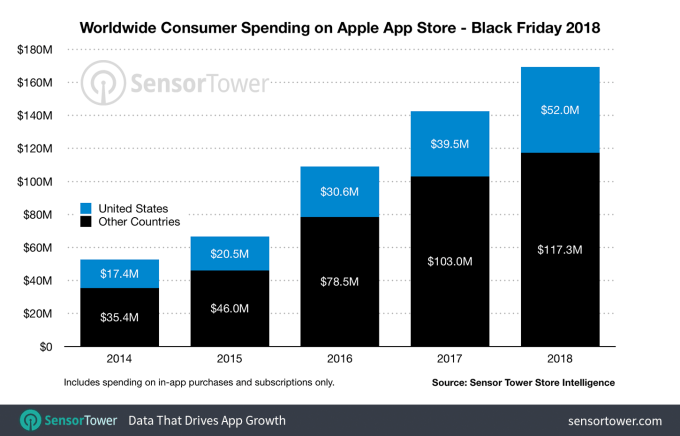 Sensor Tower attributes the increased spending to a variety of factors, largely driven by mobile gaming. Game makers this year got in on the Black Friday action by offering players discounts on in-app purchases and other special bundles.

On the U.S. App Store, mobile gaming accounted for 68 percent of Black Friday spending, with consumers spending $35.4 million on games. That’s a 63 percent increase from the week prior, the report notes.

Other categories saw a boost, too, including Food & Drink and Sports — both reflective of the leisure time consumers had over the holidays. Food & Drink grew 34 percent while Sports grew 49 percent, Sensor Tower found, with top apps like NYT Cooking and ESPN: Live Sports and Scores benefiting from the surge.

Though the Black Friday shopping holiday is heavily associated with the U.S. because of its ties to Thanksgiving, the sales event is making its way around the world, too.

On the mobile app stores, that meant worldwide consumer spending saw a jump this year, as well.

Also of note: While Amazon had its biggest day ever on Cyber Monday 2018, Cyber Monday didn’t perform as well on the app stores. In the U.S., app revenue was up about 20 percent versus the previous Cyber Monday, to reach an estimated $37 million.