It can be tough for diabetes patients to keep a constant eye on their glucose levels. Spike Diabetes lets family and doctors lend a hand by sending them real-time alerts about the patient’s stats. And the app’s artificial intelligence features can even send helpful reminders or suggest the most diabetes-friendly meals when you walk into a restaurant.

Today onstage at TechCrunch Disrupt Berlin Startup Battlefield, Spike Diabetes is launching its Guardian Portal so loved ones with permission can get a closer look at a patients’ data and coach them about staying healthy.

“Diabetes is an incurable chronic disease that forces diabetics to live a life of carb-counting and insulin injections,” says Spike co-founder Ziad Alame. “Since diabetics are forced to do those mundane tasks for the rest of their lives, they tend to fall off the tracks sometimes simply because of how demanding those tasks can be. As for guardians and parents, they are left in the dark about their loved ones.”

With doctors often only getting data during quarterly or semi-annual checkups, patients are often left on their own. “A lifetime of management is very stressful, especially if your life depends on it.”

The startup faces stiff competition from literally hundreds of apps claiming to help patients monitor their vitals. MySugr, Diabetes Connect and Health2Sync are among the most popular. But Alame says many require users to track their levels through complex spreadsheets.

Spike offers customizable mobile charts, and will even read users their stats out loud to make staying safe an easier part of daily life. Spike is invite-only and just on iOS, but it also touts an Apple Watch app plus optimized engineering to minimize battery usage.

“Spike started off as a personal project to help myself adhere better to my medication after reaching critical times in my diabetic life,” Alame tells me. Now he’s bringing to the problem his experience as CTO of the GivingLoop charity platform, TeensWhoCode summer camp and Zoomal crowdfunding site for the Arab world.

Alame has assembled a team of diabetics, engineers and PhDs, plus $200,000 in seed funding from MEVP, Cedar Mundi and Phoenician Funds. They hope to see the premium paid version of Spike’s freemium app overtake longstanding competition through word-of-mouth triggered by bringing loved ones and doctors into the loop.

One of the app’s most interesting features is the proactive info it delivers. “For example, you walk into McDonald’s around 2 PM. Spike would automatically know it’s lunch time for you and suggest the top three options you can have with approximate carb counts,” Alame tells me.

“After some time (~25 minutes) Spike automatically reminds you of your insulin and syncs with your diabetic devices to log all the details. With time, as the app gets to know the diabetic’s taste more, Spike would be able to suggest small behavioral tweaks to enhance lifestyle such as walking routes suggestions or new places similar to the diabetic’s taste but with a lower insulin consumption rate.” 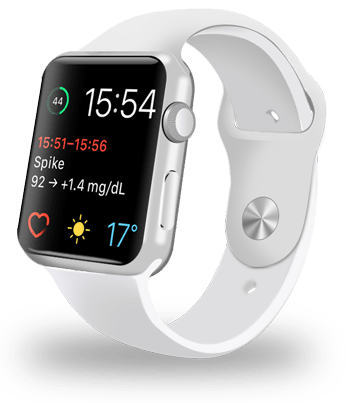 Alame jokes that “The biggest risk [to Spike] is the best thing that can happen — which is finding a cure for diabetes.” But even if that happens, he believes Spike’s app for tracking and actively coaching users could be relevant to other diseases, as well. For now, though, it will have to convince users that an app could make managing diabetes simpler rather than more complex.