A new app called Playlist aims to make music a more social experience than what’s offered today by the major music platforms like Apple Music, Pandora or Spotify, for example. In Playlist, you can find others who share your musical tastes and join group chats where you listen to playlists together in real time. You can collaborate on playlists, too.

The app, backed by investment from Stanford’s StartX fund, was founded by Karen Katz and Steve Petersen, both Stanford engineers and serial entrepreneurs. Katz previously co-founded AdSpace Networks and the social music platform, Jam Music, which served as the Playlist beta. She also was a founding executive team member at Photobucket, and founded a company called Project Playlist, which was like a Google search for music back in the Myspace era.

Peterson, meanwhile, has 35 patents and more than a decade of experience in digital music. In the early 2000s he created the software architecture and ran the team at PortalPlayer Inc., which powered the iPod’s music player and was later sold to Nvidia for $357 million. Afterwards, he was CTO at Concert Technology, a technology incubator and intellectual property company with a focus on mobile, social and digital music services.

Chris Obereder was CMO of Jam Music, and was added as a Playlist co-founder while the service was in beta, says Katz. He’s a growth hacker, app developer, game developer, and is now helpling Playlist onboard influencers to its service. 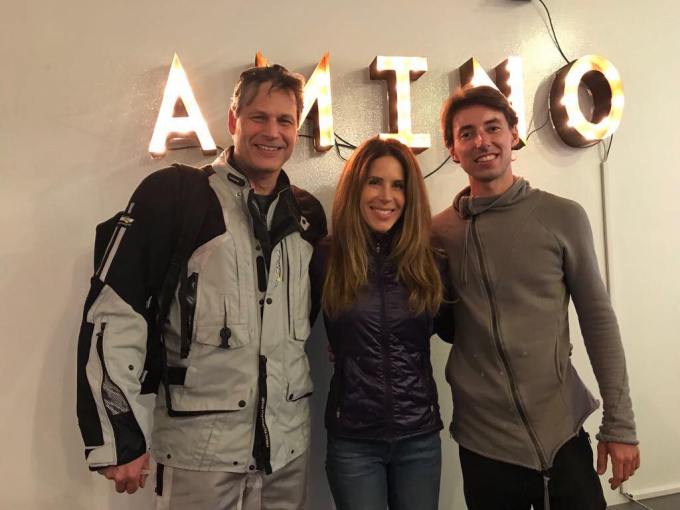 “The world has gone social, but music has been largely left behind. That’s a real gap,” explains Katz, as to why the founders wanted to build Playlist in the first place.

“Ever since we started listening to music from our mobile phones, it’s become an isolated experience. And music is the number one thing we do on our phones,” she says.

The idea they came up with was to unite music and messaging by synchronizing streams, so people could listen to songs together at the same time and chat while they do so. 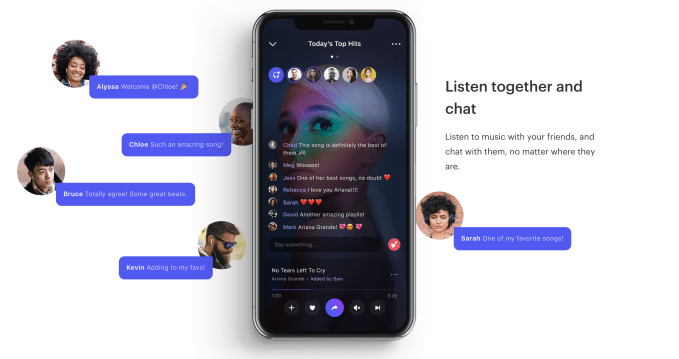 During last year’s beta testing period, Playlist (which was listed under a different name on the App Store), saw a huge number of engagements as a result of its real-time nature.

“Out of the gate, we saw 10 times the engagement of Pandora. People have, on average, 60 interactions per hour — like chats, likes, follows, joins, adds and creates,” Katz says.

Under the hood, the app uses a lot of technology beyond just its synchronized streaming. It also leverages machine learning for its social recommendations, as well as collaborative playlists, large-scale group chat, and behavior-based music programming, and has “Music Match” algorithms to help you find people who listen to the same sort of things you do.

The social aspects of the app involves a following/follower model, and presents playlists from the people you follow in your home feed, much like a music-focused version of Instagram. A separate Discover section lets you find more people to follow or join in other popular listening and chat sessions. 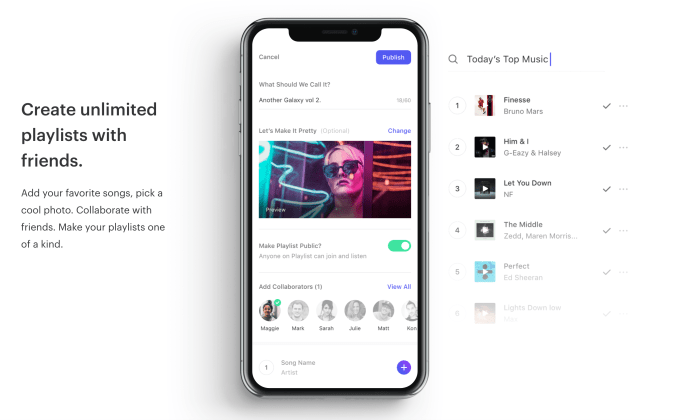 At launch, the app has a catalog of more than 45 million songs and has a music license for the U.S. It plans to monetize through advertising.

The core idea here — real-time music listening and chat — is interesting. It’s like a Turntable.fm for the Instagram age. But the app sometimes overcomplicates things, it seems. For example, importing a playlist from another music app involves switching over to that app, finding the playlist and copying its sharing URL, then switching back to Playlist to paste it in a pop-up box. It then offers a way for you to add your own custom photo to the playlist, which feels a little unnecessary as the default is album art.

Another odd choice is that it’s difficult to figure out how to leave a group chat once you’ve joined. You can mute the playlist that’s streaming or you can minimize the player, but the option to “leave” is tucked away under another menu, making it harder to find.

The player interface also offers a heart, a plus (+), a share button, a mute button and a skip button all on the bottom row. It’s… well… it’s a lot.

But Katz says that the design choices they’ve made here are based on extensive user testing and feedback. Plus, the app’s younger users — often high schoolers, and not much older than 21 — are the ones demanding all the buttons and options.

It’s hard to argue with the results. The beta app acquired more than 500,000 users during last year’s test period, and those users are being switched over to the now publicly available Playlist app, which has some 80K installs as of last week, according to Sensor Tower data.

The company also plans to leverage the assets it acquired from the old Project Playlist, which includes some 30 million emails, 21 million Facebook IDs and 14 million Twitter IDs. A “Throwback Thursday” marketing campaign will reach out to those users to offer them a way to listen to their old playlists.

The Palo Alto-based company is a team of six full-time.

Playlist is a free download for iOS. An Android version is in the works.