Shares of technology companies were battered in today’s trading as fears of an increasing trade war between the U.S. and China and rising interest rates convinced worried investors to sell.

Facebook, Alphabet (the parent company of Google), Apple, Netflix and Amazon all fell into bear trading territory, which means that the value of these stocks have slid more than 20 percent. CNBC has a handy chart illustrating just how bad things have been for the largest tech companies in the U.S. 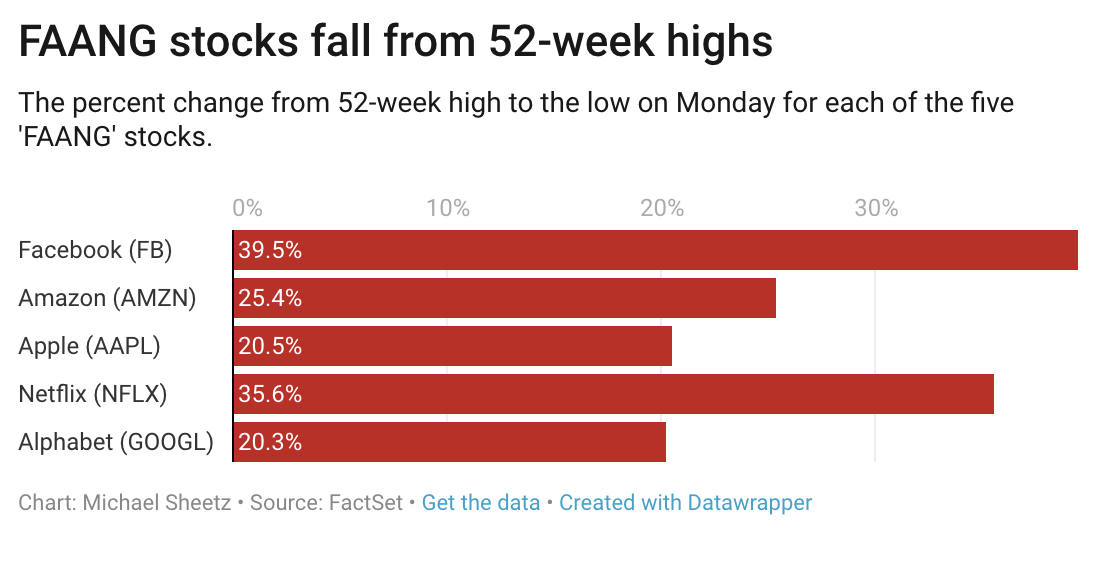 Some of the woes from tech stocks aren’t necessarily trade-war related. Facebook shares have been hammered on the back of a blockbuster New York Times report detailing the missteps and misdirection involved in the company’s response to Russian interference in the U.S. elections. Investors are likely concerned that the company’s margins will shrink as it spends more on content moderation.

And Apple saw its shares decline on reports that sales of its new iPhones may not be as rosy as the company predicted — although the holiday season should boost those numbers. According to a Wall Street Journal report, Apple has cut the targets for all of its new phones amid uncertainties around sales.

The Journal reported that in recent weeks, Apple had cut its production orders for all of the iPhone models it unveiled in September, which has carried through the supply chain. Specifically, targets for the new iPhone XR were cut by one-third from the 70 million units the company had asked suppliers to produce, according to WSJ sources.

Those sales numbers had a ripple effect throughout Apple’s supply chain, hitting the stock prices for a number of suppliers and competitors.

But the U.S. government’s escalating trade war with China is definitely a concern for most of the technology industry as tariffs are likely to affect supply chains and drive prices higher.

According to a research note from Chris Zaccarelli, the chief investment officer at Independent Advisor Alliance, quoted in MarketWatch, interest rates and slowing global growth are adding to trade war pressures to drive tech stock prices down.

“Tech continues to be caught in the crosshairs of the triple threat of rising interest rates, global growth fears and trade tensions with China,” Zaccarelli wrote. “Trade war concerns with China weigh on the global supply chain for large technology companies while global growth fears worry many that future earnings will be lower,” he said.