There are plenty of weather apps to choose from on the App Store, but the newly released Weather Up app is doing something different. Instead of just offering the daily weather, it will now offer Event Forecasts — meaning forecasts that sync with your calendars so you can see what the weather will be for your upcoming appointments and various events.

The feature is customizable, so you don’t have to use it with all your calendars — or even all your events. You can opt to tag specific events in order to show the weather forecast for just those.

Event Forecasts is useful for planning your outdoor activities like the kids’ soccer games, outdoor concerts and more, but also for planning for events you’ll walk to or drive to. 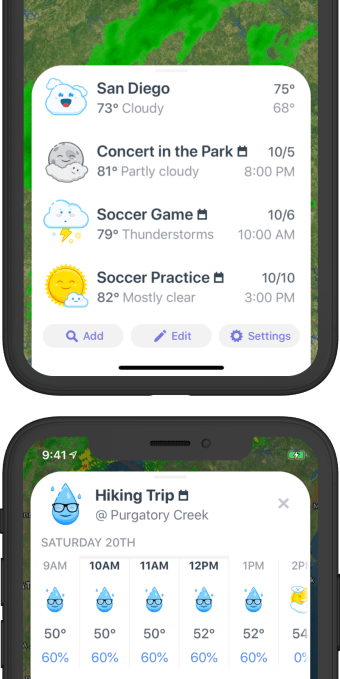 The app itself is not new. It actually began its life last year as Weather Atlas, from Launch Center Pro developer David Barnard. He admits the first version app struggled with retention, so he’s now overhauled it from a usability perspective, based on user feedback and testing.

The revamped app — basically the 2.0 release of Weather Atlas — is now rebranded as Weather Up, as a result of these and other changes, which also includes a new set of cute app icons.

“Apps that don’t take off are often abandoned, but the weather category is just so interesting to me I’m going to keep pushing until I carve out a decent niche. And I think Weather Up is a great step in the right direction,” says Barnard.

He says a lot of time was spent on making the app feel more intuitive — especially in terms of its gestural interface. The new design makes use of the extra vertical space on X-series iPhones and makes most of its buttons and gestures easily accessible from the lower portion of the screen, he says.

Another interesting thing he’s trying in the new app is an in-app Merch Store, which is certainly a first for a weather application — or productivity apps in general, for the most part.

To help with monetization, the store will sell things like shirts, mugs, bags, hats and more emblazoned with the new icons — which Barnard recently showed off on Twitter.

The store is also available on the developer’s website.

I voted. (And beta tested some sweet @WeatherAtlas and @LaunchCenterPro merch. Been getting a surprising number of people saying they like my shirt.) pic.twitter.com/mSCfZ6KMgZ

The app’s core feature set, of course, is its weather forecasts. In addition to temperature, it also shows humidity and precipitation accumulation, and warns about weather events like thunderstorms, tornadoes, hurricanes and tropical tracks.

As an indie developer, Barnard hopes people will choose his app over others because he vows not to sell user data or even location data to advertisers — even though that would be more profitable, he says.

Weather Up is a free download on the App Store, with a pro feature set available for $9.99/year or $1.99/month.