Only a few years ago, OpenStack was the hottest open-source project around, with a bustling startup ecosystem to boot. The project, which gives enterprises the tools to run the equivalent of AWS in their own private data centers, ran into trouble as it tried to tackle too many individual projects at the same time and enterprises took longer than expected to adopt it. That meant many a startup floundered or was acquired before it was able to gain traction while the nonprofit foundation that manages the project started to scale back its big tent approach and refocused on its core services.

The height of the OpenStack hype was around late 2014, where even small startups used their copious venture funding to host lavish parties at the project’s conferences. But by 2016, it was deep in the trough of disillusionment as a number of major backers like HPE, Cisco and IBM started to sell off their OpenStack assets or reduce their involvement in the project, and some of the startups in the ecosystem called it quits. But something interesting happened after that. The OpenStack project moved along, fixed many of its problems and adapted to a changing world where everybody wants to talk about containers and edge computing.

Today, it’s a stable system that’s the de facto standard for running private clouds. There’s very little hype, but now there’s lots of actual usage. Only a few years ago, there was plenty of hype, but you would’ve been hard pressed to find any major company that ran a significant OpenStack deployment in production. People who made an early bet on OpenStack and seemed miserable a year ago now have a bit of bounce in their step again. And lately, I’ve heard from a number of vendors, including the likes of Suse, that tell me they make more money from OpenStack now than at any time during the hype phase. Indeed, according to the Foundation’s latest stats, OpenStack users now use the system to manage well over 10 million cores of compute power.

“There is a perception versus reality thing,” OpenStack Foundation COO Mark Collier told me. “We’re past the peak of the hype cycle for this particular technology in people’s minds. And so there’s this interesting paradox which is that adoption tends to go up as hype goes down.” 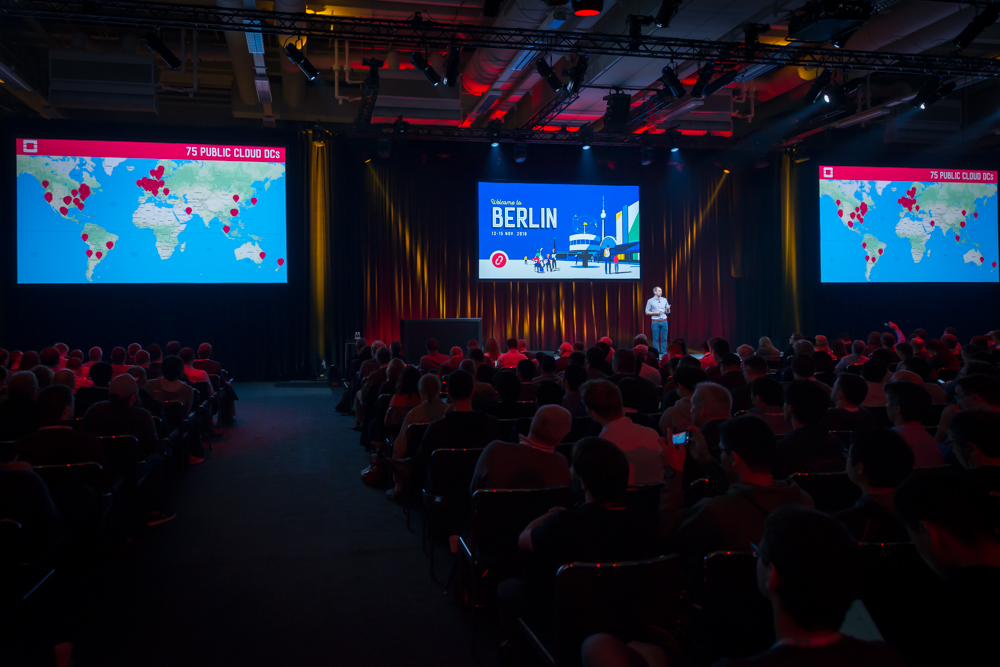 Stable systems are boring, though, and so it’s maybe no surprise that the OpenStack Foundation decided that it’s time to redirect some of its community’s energy to tackle some new problems, all with a focus on open source infrastructure problems, but without the requirement that they are tied directly to the actual OpenStack project. That’s a move that started more than a year ago and that’s now starting to take concrete form.

What is changing, though, is the nature of what the Foundation is doing. A board meeting earlier the week made official the Foundation’s process for adopting new projects outside of the core OpenStack project. There’s now a process for adding so-called “pilot projects” and fostering them for a minimum of 18 months. With this, the Foundation is also making it clear that its focus for these projects will be on continuous integration and continuous delivery (CI/CD), container infrastructure, edge computing, data center and artificial intelligence and machine learning. There are currently four of these pilot projects: Airship, Kata Containers, StarlingX and Zuul. 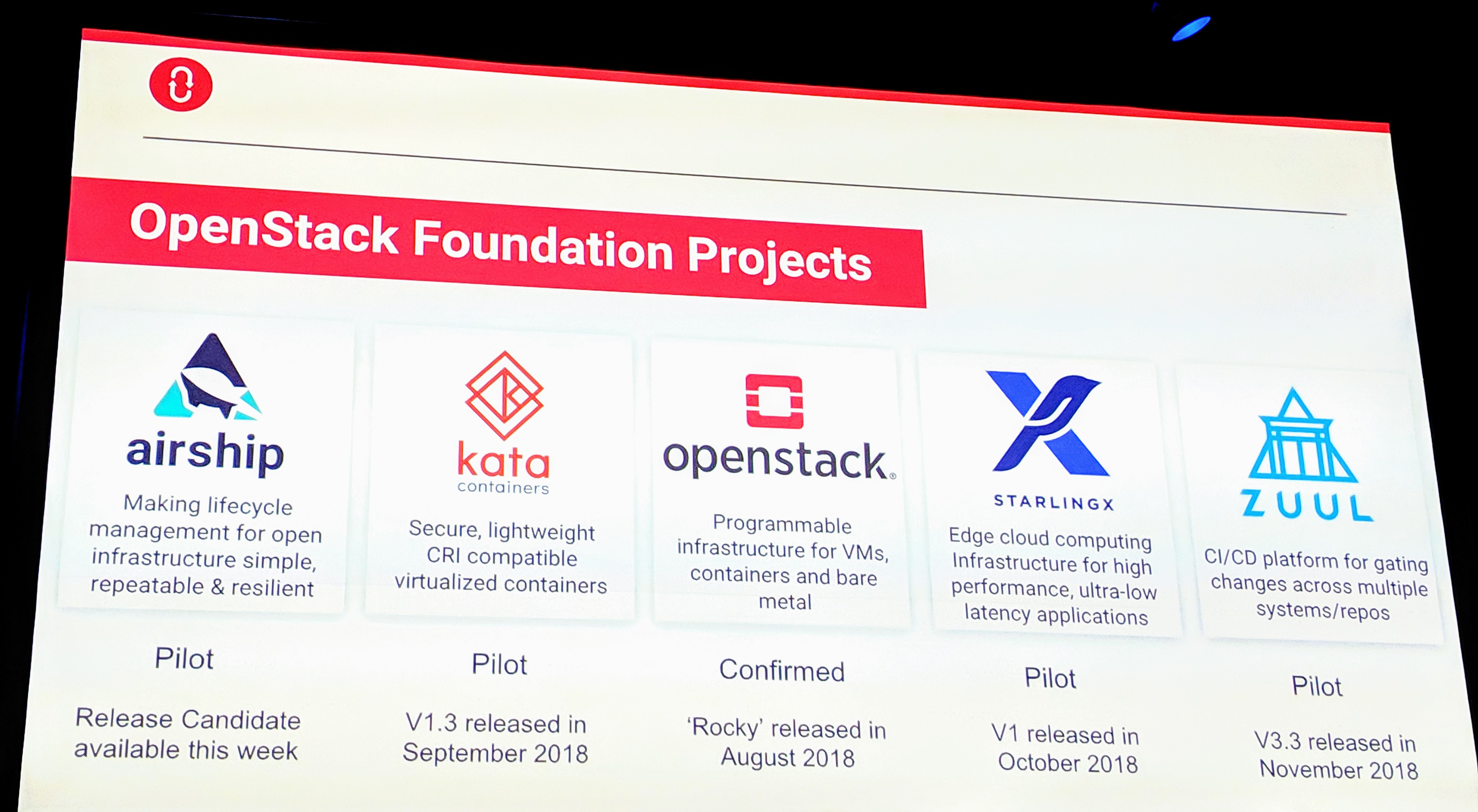 None of these projects are new — and all of them are in different stages of development — but it’s a start for OpenStack to spread its wings. The idea here is not to manage dozens of projects, though — or to increase the Foundation’s revenue by setting up new foundations inside the current framework. “We’re not trying to have dozens of projects,” OpenStack’s VP of marketing and community services Lauren Sell explained. “It’s really this tighter, more focused scope around people who run or manage infrastructure.” There’s also no additional bureaucracy — at least for the time being. “We have not created new boards of directors or foundations for each project,” Collier added. “We’re also not trying to house a huge amount of projects. We have a specific form of open collaboration that we feel has really proven it works with OpenStack. And a few people started coming to us going: we’d like to use that same model.”

The Foundation members are the first to acknowledge that there are still details that need to be worked out — and that will take a while.

At the same time, though, OpenStack — the actual technology — isn’t going anywhere, and will remain core to the Foundation’s efforts. “We said very clearly this week that open infrastructure starts with OpenStack, so it’s not separate from it. OpenStack is the anchor tenant of the whole concept,” Collier said. “The core OpenStack community is really thinking about how OpenStack is deployed and it’s always deployed with other technologies and some of these can now be more easily collaborated with and integrated with because they’re happening at the same events.” Sell echoed this. “We’re not moving away from OpenStack,” she told me. “This is not separate from OpenStack. All that we are doing is actually meant to make OpenStack better.”

Canonical founder Mark Shuttleworth has a slightly different opinion about the current direction of the Foundation, though. He seems to be worried that the focus on multiple projects will take away from the core OpenStack project. “OpenStack suffered when there wasn’t clarity about the mission,” he said. “And I hope that in broadening the scope of what they as the Foundation want to worry about won’t confuse people about OpenStack.” Today, he believes, OpenStack is in a good spot because it delivers on a specific set of promises. “I would really like to see the Foundation employ the key contributors to OpenStack so that the heart of OpenStack had long-term stability that wasn’t subject to a popularity contest every six months,” he added. 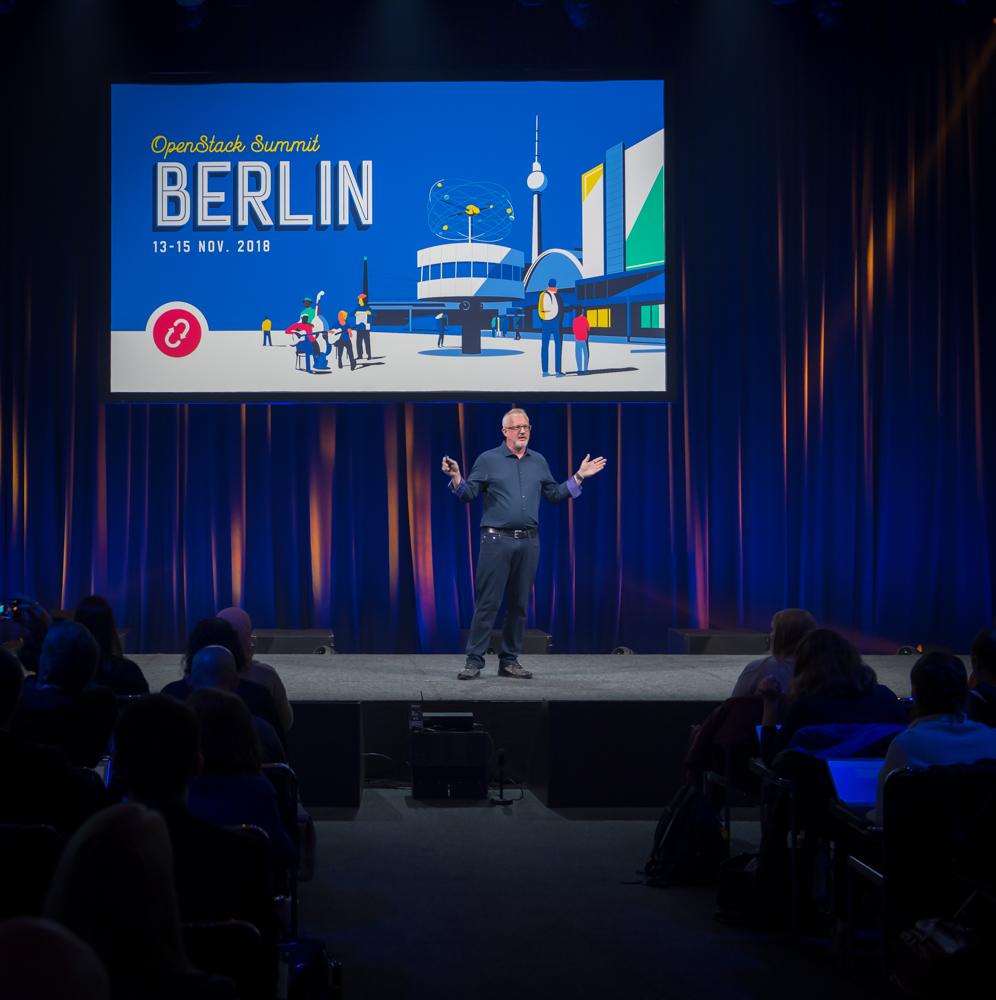 There can be no doubt that today, a number of companies are back to doubling down on OpenStack as their core focus. Mirantis, for example, was one of the earliest and best-known (and well-funded) backers of the project. A year ago, it looked like the company was going to switch its focus to application delivery and away from infrastructure. Today, it’s still building out that side of its business, but as co-founders Adrian Ionel and Boris Renski told me, the OpenStack side of its business is growing, with both new customers coming on board and existing customers like Adobe and Apple expanding their deployments. “Something changed,” Renski. He attributed that change to the Foundation’s focus on edge computing. “I think as the edge is becoming more relevant and more of a real thing, it’s actually possible to productize OpenStack much better.”

Interestingly, much of the interest in OpenStack today is in China. The U.S. market for OpenStack, on the other hand, is still growing, but at a far slower pace. Collier attributed the success in China to the fact that the country has massive infrastructure need and that it has embraced open source. “If you have those two criteria, you’re going to run OpenStack like crazy,” he said. “What else are you going to run?” He did add, though, that the Chinese government has also gotten involved in evangelizing technology standards and that many a group in the government has identified OpenStack as one of those.

While OpenStack feels like it’s back on track, though, this move to broaden the Foundation’s scope also sets it up for some competition with the Linux Foundation, and especially the Cloud Native Computing Foundation, which it manages. A number of pundits at the event were surprised that Ceph, an open-source storage service that’s at the core of many major OpenStack deployments, as well as container-based platforms, formed its own foundation under the Linux Foundation earlier this week.

Sell and Collier don’t see it that way, though. “I think it’s a strong statement that [the Ceph Foundation] had a really successful event here and made the announcement from here,” Sell said. “I think that shows that some of these foundation lines and where projects live is not as significant as you may think it is.” 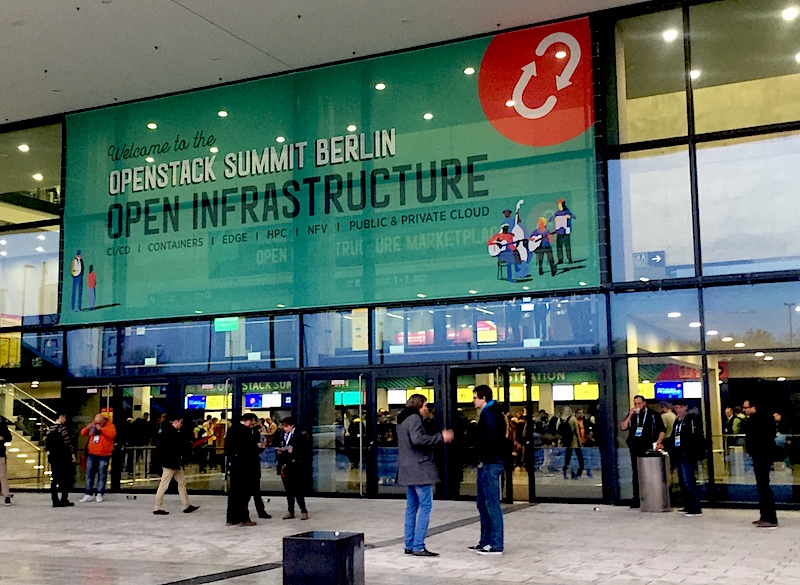 “I think that what matters to us is that the people from the Ceph community feel welcome here,” Collier added. “And all we really want to do is have the people collaborate and have the technology work together. Where the actual pieces of software that are put together ultimately live in terms of foundations, it’s not that important.”

He also noted that he never saw a user who cared whether a project lived in the Apache Foundation or the Linux Foundation, for example. What matters instead is the community around a project. He did acknowledge, though, that the foundations that manage projects obviously matter — and that this is important enough that the OpenStack Foundation is changing to accommodate the projects that would be a good fit under its auspices.

No matter how this will eventually play out, though, it’s been interesting to watch the journey of OpenStack over the last few years. When I first really started paying attention to it, it was at the top of the hype cycle. Those parties were fun, but OpenStack hadn’t proven itself. Then, the approach of bringing in lots of projects started to muddle the project’s mission and, at the same, the startup ecosystem began to flounder as enterprise adoption materialized at a glacial pace. Some companies, like Mirantis, had raised enough money to hang in there, though, and those are now finally reaping the rewards. What didn’t go away, though, was the community that built the project, and many of the large corporate backers. In part, that’s because more use cases for private data centers have emerged. Telcos, banks and others are betting on those — and there are simply no real alternatives to OpenStack for them.

Today, OpenStack itself is frankly boring. There are no major new features. Nobody is pumping a lot of money into the OpenStack ecosystem. But the enterprise world is just fine with that, because those companies aren’t betting their business on OpenStack because it’s the cool new thing. At the same time, the OpenStack Foundation is also reinventing itself to react to the needs of its community. And as new projects emerge, maybe the hype cycle will start over again.