I’m a fan of Alexa and of voice computing in general. But when Amazon said it was putting Alexa into a microwave, I wasn’t so sure. The value in voice computing is being able to get to news, information and music hands-free, as well as perform simple tasks, including those for the smart home — like changing the thermostat from downstairs, or taking a peek at your security camera video from your Echo Show. But a microwave? Really?

Microwaves, after all, are one of the most common kitchen appliances. And, unlike conventional ovens, they’re dead simple to use.

Amazon, however, would disagree.

The company believes consumers aren’t taking full advantage of their microwave’s more advanced settings, which are overly complicated. That’s where Alexa could help, the company says. 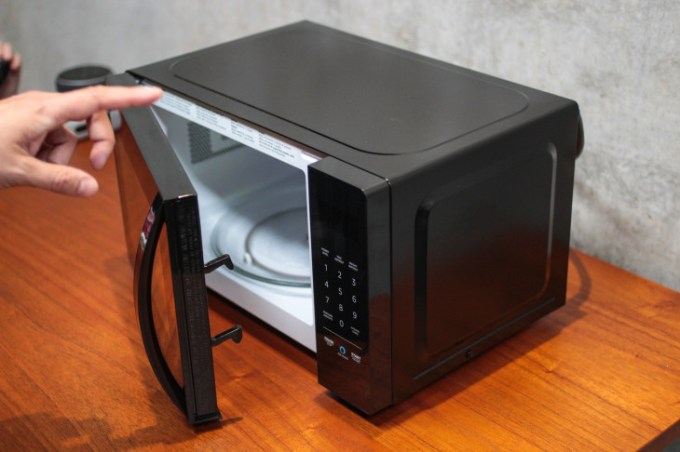 “Most people don’t use them for all the features that they’re able to do — like presets and ways you can do some more complicated cooking are beyond the reach of most people,” said Charlie Tritschler, vice president, Amazon Devices. “And oftentimes folks just resort to pushing the ‘Add 30 seconds’ button a bunch of times,” he continued. “[Microwaves] are great for cooking simple things like popcorn, but if you want to defrost or use some of the other presets, you sometimes have to go to the owner’s manual,” he said.

Of course that’s not universally true. Perhaps some microwaves may not have the most intuitive interfaces, but the learning curve isn’t steep. After the first time you learn to program the power level or enter in how many pounds of meat you’re defrosting, you generally retain that knowledge for later use.

But even if you don’t buy into the premise that microwave controls are a challenge to solve, there’s still the novelty aspect of the voice-activated microwave. If it takes the same or less time, but “feels fun,” some consumers may still buy it, I suppose. (???)

Unfortunately, it wasn’t really all that fun.

In fact, it was often frustrating. 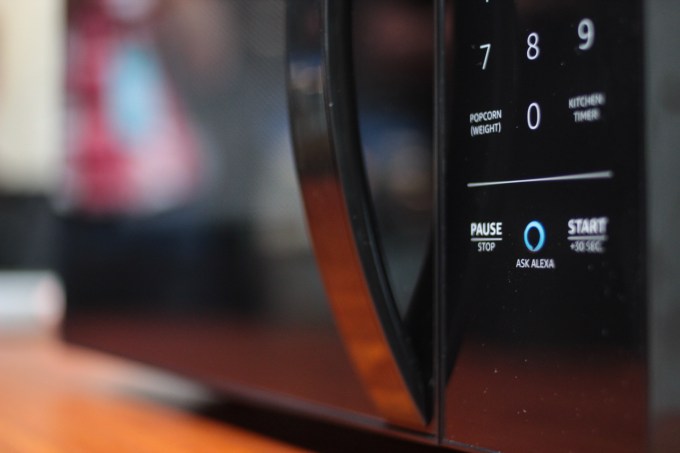 The Alexa microwave is not like your Echo. It’s more like a companion device to your Echo, as it uses Alexa Connect Kit technology. To use it, you have to pair the microwave with an Echo speaker. Then, you can control it by voice commands that begin with “Alexa,” or you can push a button and omit the “Alexa” part of the command.

The Echo speaker also needs to be near-ish the microwave, I found. We first tried shouting over to the living room Alexa and half the time she didn’t hear us, despite our home’s open floor plan. That means you’ll probably have to buy an Echo for the kitchen to use this thing.

Amazon only gave us a day to play around with the microwave, so we didn’t try some of the fancier recipes — perhaps it has value there — but our initial impression is that this feels much more like a demo of Alexa technology than a future top seller on Amazon.com.

After turning the oven on, the clock flashed 0:00 for a few seconds, then, the next thing you know, it switched to the correct time and appeared as a new device in the Alexa app ready to be paired with an Echo. Can everything be this easy to set up in the future, please? The device includes a ring and turntable and has a standard set of buttons on the front for manual control, including defrost buttons by time and weight, a power level button, dedicated popcorn button, timer and Start/Stop and Pause buttons, in addition to the “Ask Alexa” button at the bottom.

You can also configure the microwave to re-order your popcorn through Amazon’s replenishment service, but this requires that you commit to a brand and pack size you always want to have on hand. I like popcorn as much as the next person, but I’m okay going without, too. If, however, you are some sort of popcorn monster, well…okay then, that’s a feature for you. 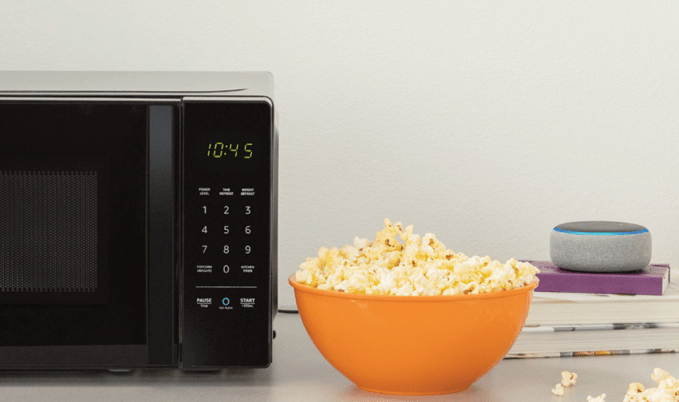 You can also command Alexa to microwave something by indicating the time to cook.

The command set Amazon has built seems to indicate that people don’t know how long to microwave specific items...reheating a dinner plate? A cup of coffee? Some pasta?

But in reality, most people probably have a good guess by eyeballing their plate (or cup), and then mashing a number button on the microwave to turn it on for a minute, two, three or more, as needed.

I mean, sure, maybe if we took the time to adjust the power levels, things would cook better — but if we wanted “better,” we’d use a real oven, right?

In any event, pushing a single button is a lot simpler than talking to an oven. 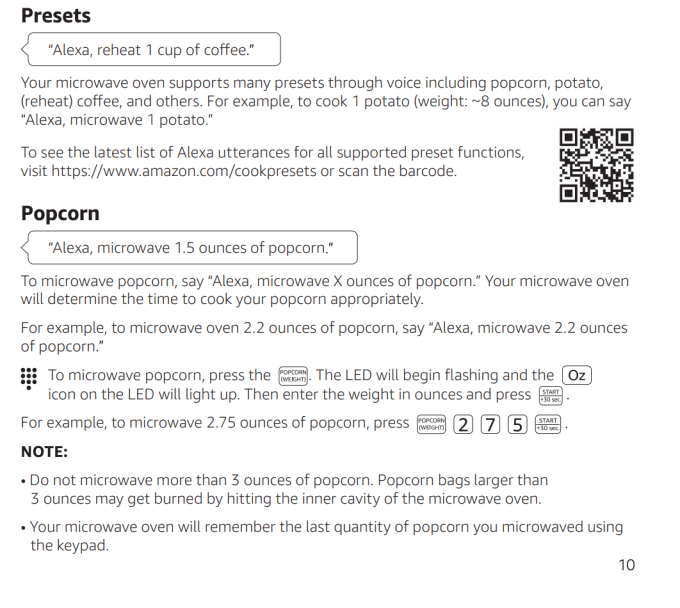 Above: harder ways to do easy things

Once set up, you can use the Alexa commands as you would any other smart home gadget (i.e. “Alexa,” followed by the command), or you can push the microwave’s “Ask Alexa” button, then give her a command without saying Alexa.

Having…umm…not read the manual at first — the very thing Amazon said people don’t do! — I didn’t even realize that was the case, initially.

So when the microwave didn’t perform as I expected to an “Alexa” voice command, I initially assumed the “Ask Alexa” button press was always required.

That’s not true, though: We had just said the command wrong. In this case, the proper voice command should have been: “Alexa, microwave for 2 minutes.” With the button push, it could have been just “two minutes.”

I do understand that an “Alexa, two minutes” command could be confused with a timer, but couldn’t Alexa tell I just shut the microwave door, then make a logical, AI-powered leap? (After all, she does seem to have some sort of “door awareness.” I asked her to microwave something after not using the oven for a bit — I had left a cup of water inside — and she told me the microwave door had been closed for too long — so, sorry, she won’t do it.)

After reading the manual, and learning of my error, I successfully started the oven both ways — with and without the button.

But sometimes Alexa’s ability to understand the commands was confounding.

For instance, Amazon’s manual says that you can also give voice commands while the microwave is cooking. But when I said simply, “Alexa, add 30 seconds” while the oven was cooking, Alexa said she “didn’t know that one.” (I then had to push the button for it to work.)

This seemed like a command Alexa should have figured out, though. The microwave was currently running! I had no timers! What on earth did Alexa not understand about “Add 30 seconds?”

Again, the issue appears to be one of semantics. The voice command without a button push should have been “Alexa, add 30 seconds to the microwave.”

Being able to say “Alexa” sometimes and other times not adds a bit of cognitive overhead to using the voice commands. Instead of making things easier, it complicates them.

After, pushing the button, you can just say “two minutes.”

But, surprisingly, it’s actually hard to remember to drop the “Alexa” bit when it’s been the precursor to using voice commands for so long.

I actually think the product would have worked better if there was one way to issue voice commands, not two. Or if the door opening and shutting would also trigger the same “button push,” instead of there being an actual button to push.

At the end of the day, there’s a much simpler way to do things on a microwave.