Amazon’s Fire TV companion DVR, the Fire TV Recast, is available today to the public, after previously having been only offered for pre-order. The new device offers a way for Fire TV owners to easily access free, over-the-air broadcast television directly from the Fire TV’s software. Starting at $229, this cord cutters’ DVR is something of a modern-day TiVo, as it combines access to live TV, recordings and on-demand programming all in one interface. But while the Fire TV Recast works as advertised, channel reception in your area can hinder your experience.

The Fire TV Recast was one of many products Amazon introduced at its over-stuffed Alexa event this September.

The device is designed to work with your existing Fire TV Edition television, Fire TV or Fire TV Stick and a digital antenna, allowing you to watch live television directly in the Fire TV interface, as well as record programs. Notably, the DVR recordings and live TV streams are also available via mobile, when you’re away from your home Wi-Fi network, even if you’re only on cellular.

This feature is available at no extra charge, just like the rest of what Recast offers — including its Live TV channel guide, DVR storage (either 500GB or 1TB with the option to expand through its USB port coming soon) and the companion mobile app.

If you’re already a Fire TV owner — or are preparing to become one — it makes sense to consider the Recast over a competing solution like TiVo or a Plex DVR setup because of how it integrates with your existing Fire TV. That means you’re using the same software you’re already familiar with, but enhanced with extra features like an “On Now” row that displays what’s currently airing and a “DVR” section to access your recordings. 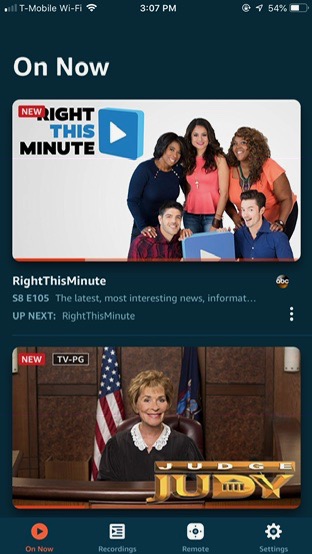 From a software design standpoint, these additions feel natural, easy to locate and easy to use.

But in terms of being a usable, real-world solution, the Fire TV Recast is ultimately hit-or-miss, simply because it depends on an antenna.

Antennas aren’t for everyone

The Recast is an HDTV antenna-dependant solution. Antennas aren’t the best way to watch TV, they’re just the cheapest. That will appeal to some users, but turn off others.

Channel reception is highly variable based on a number of factors, including your location, surroundings, terrain, distance to TV broadcast towers and channel availability in your area.

Before spending a couple hundred dollars-plus on Amazon’s new DVR, you’ll want to first check out Amazon’s Purchase Assistant to see what’s offered in your area, as well as the FCC’s reception maps. You could also just buy the digital antenna first to test reception at your home before plunking down the big money for the DVR.

I wasn’t favored with good reception, unfortunately. No matter where my antenna was mounted — walls, windows, the second story, etc. — some of the channels were still garbled and glitchy. This is really a “your mileage may vary” solution — I’m many miles from some broadcast towers. The better your reception, the more you’ll enjoy the Fire TV Recast.

Another factor to consider is that while adding a digital antenna to your cord cutting mix is cheaper than, say, a year of Hulu, you’re not getting high-quality content. While the FCC has approved a new broadcast standard (ATSC 3.0) that will support 4K UHD picture quality, there are no 4K over-the-air TV broadcasts available today — and that won’t likely change for some time.

That means when you’re switching back and forth from 4K programming on your Fire TV Stick 4K to this lower-quality, over-the-air content, you’re really going to notice the difference.

That being said, there are things people want an antenna for — like live sports, local news and programming, and other live events, like awards shows. While some of this content is moving to streaming, it’s not typically streaming for free.

Getting started with Recast

The setup was extremely simple.

The antenna connects to the Fire TV Recast, and can be placed anywhere in your home. That’s actually the best part, because no matter where you mount a digital antenna, it’s not exactly a thing of beauty. In fact, it pretty much junks up the room, aesthetically speaking. 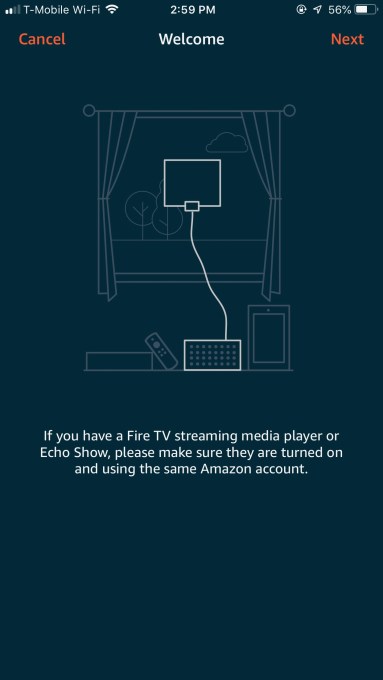 Seriously, the best part is that using an antenna doesn’t have to ruin your living room anymore

The newly updated Fire TV app walks you through a series of setup screens that helpfully offer tips on antenna placement, and helps you get the Recast connected to your Wi-Fi network. (It’s the same process as connecting an Amazon Echo, and only takes a minute.)

When complete, the Recast scans for available channels. 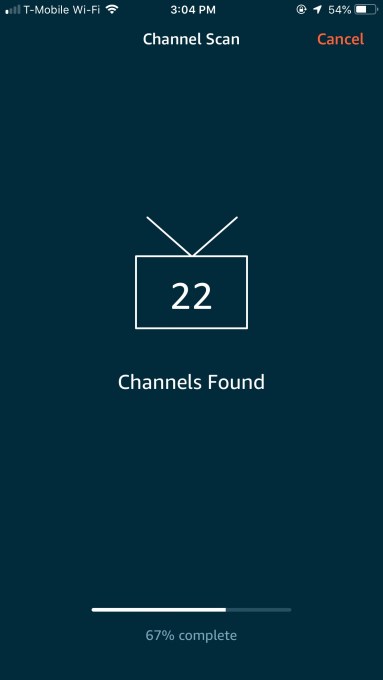 My app crashed once during this scanning process, but it’s a beta build. This may or may not still be a bug when the public release arrives.

When finished, you can watch TV or recordings right in the Fire TV app, in addition to Fire TV itself. Soon, you’ll be able to record future programs from the app, instead of just currently airing ones, Amazon says.

Multiple people can stream from a Recast at the same time, but streaming to multiple iOS devices is rolling out shortly after launch, Amazon also noted.

Using the Recast with Fire TV

As far as browsing the Recast, everything is nicely organized on your Fire TV interface.

Scroll down on the Home screen, and a row of live TV shows is blended right in with your other options, like Amazon’s Prime programming or your Amazon Channels subscriptions. 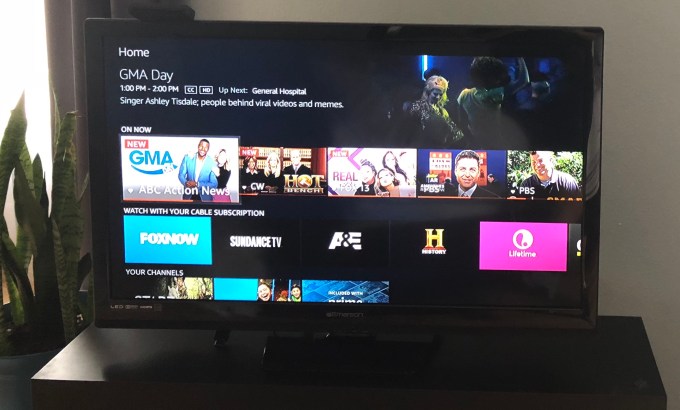 The “DVR” menu at the top lets you quickly get to your recorded programs, so you can watch or delete them, as desired.

And the Live TV channel guide lets you search ahead up to two weeks of programming to find things to record.

None of this feels tacked on at the last minute, and navigation is not confusing. It all fits in seamlessly with Fire TV’s other content and its user interface. There’s zero learning curve. 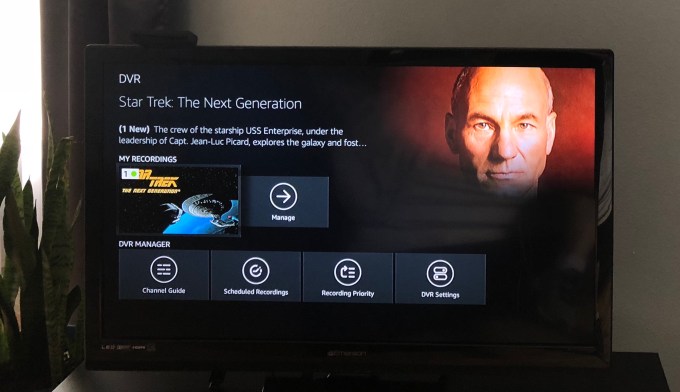 In my experience, the TV programs loaded fairly quickly, if slower than launching a show on Netflix, for comparison’s sake. I personally felt that watching on mobile was a better experience than viewing shows on the big screen, because you don’t notice the poor picture quality as much when on mobile.

The other key feature is voice control.

You don’t need a Fire TV Recast in order to voice control a TV, to be clear. That’s a Fire TV feature, too. 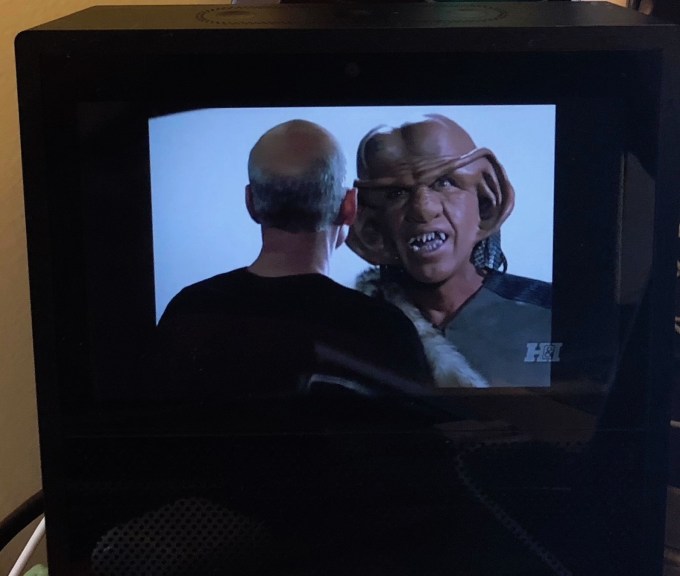 But Alexa has been updated to work with the Recast, so you can say things like “Alexa, open Channel Guide,” “Alex tune to NBC” or “Alexa, show my recordings,” among other things. You can even record shows, cancel recordings and delete recordings by voice commands, as well as rewind and fast-forward by a period of time.

For giggles, I suppose, you can also stream live TV and watch recordings on an Echo Show, Amazon’s screen-based Alexa speaker. You can pair your Bluetooth headphones with an Echo Show and have a great desk accessory for the office, I guess, or catch up on shows while cooking dinner in your kitchen.

I am probably never going to watch TV on an Echo Show. But hey, have fun with that if you do.

A good addition, if you’re happy with antennas

If you’re in the market for a connected DVR and are a Fire TV owner, the Fire TV Recast can be a good addition to your setup — if you get reception and don’t already have another way to watch the TV you want — like through Hulu or Sling TV, for instance.

If you’re a Roku or Apple TV owner, however, it may not be worth abandoning your current platform just for the Recast, unless you’re really in need of cheaper access to live TV, or on-the-go access to live TV and recordings.

For those who fit that description, it’s easy to recommend the Fire TV Recast over rivals for its well-designed software, ease of setup, mobile streaming and the ability to hide the ugly antenna in another room.

Amazon is also selling an equipment bundle with the Recast, Fire TV Stick 4K and 35-mile HDTV antenna for $249.97, which is a good deal if you’re ready to commit.