At last month’s Apple event, the Mac Mini was greeted like a returning hero. Maybe it was the over the top space advert or the fact that the company had packed the seats of the Brooklyn opera house full of local employees.

Most likely, however, it had at least a little to do with the return of an Apple line that had seemingly been forgotten. Like the MacBook Air, the plucky little desktop had been ostensibly abandoned. In the four years since its last meaningful update, the Mini had been encased in amber, seemingly a relic of Apple’s past.

The phrase in science is “Lazarus taxon,” the return of a grouping that had seemingly been lost to history. Granted, Apple continued to stock the Mini, but in the rapidly evolving world of computer components, a four-year system might as well be an artifact from some long-forgotten ancient civilization.

Among other things, that gap gives us a good occasion to reconsider the Mac Mini’s place in the Apple ecosystem and the computing world at large. Apple clearly has. In fact, the whole of the company’s desktop line has clearly gotten a rethink over the course of the last year, including the addition of the iMac Pro, and the still MIA Mac Pro.

The Mini has long been Apple’s entry-level desktop. The $499 price tag on the 2014 model certainly highlighted this fact. With a $300 price bump, the latest version still represents the lowest cost path into the world of desktop Macs, but arguably removes “entry” from the equation. 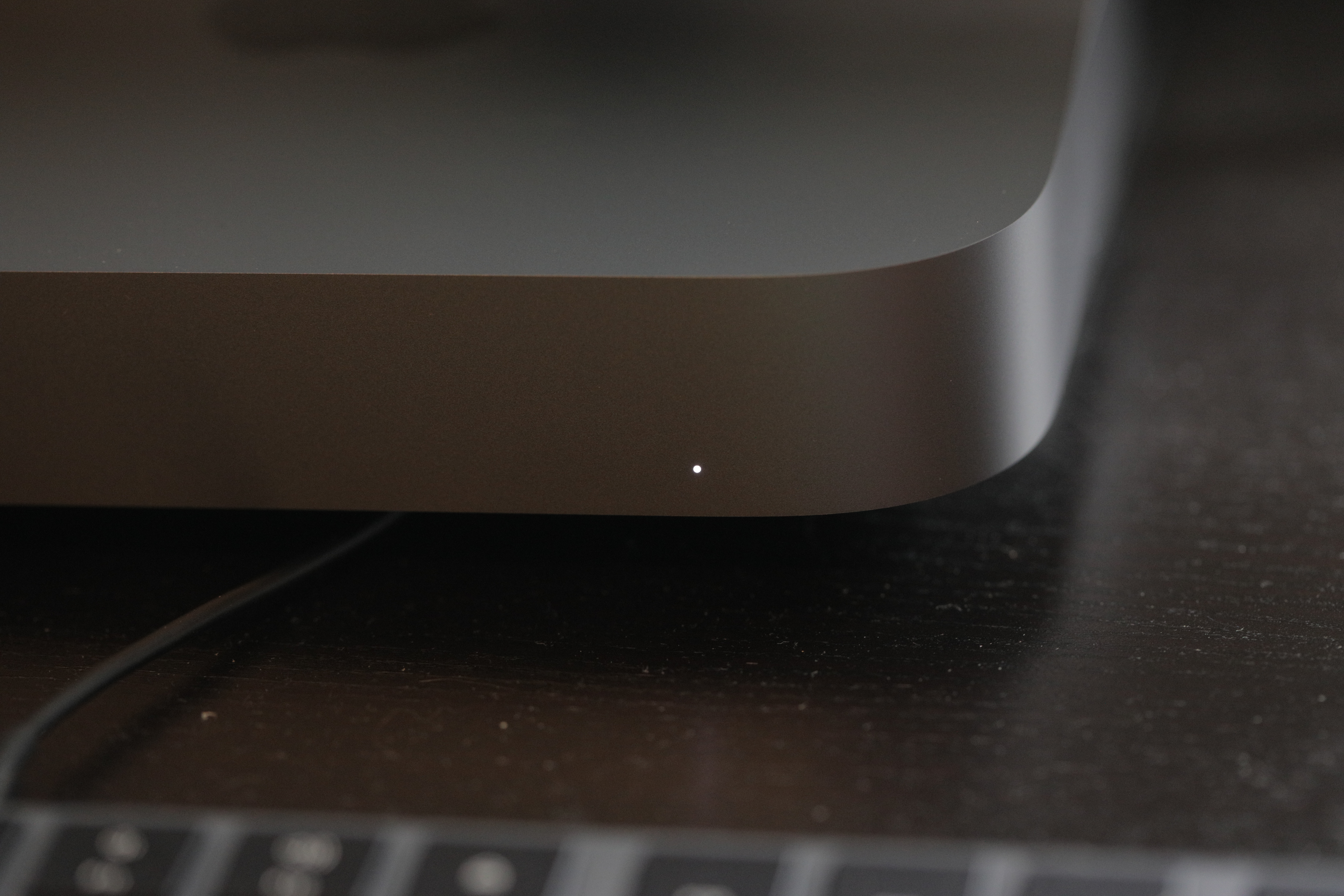 The price jump, naturally, comes with a notable spec increase, one that puts the diminutive desktop in line with a desktop ecosystem that finds Apple catering once again to its core competency of creative pros. Along with the built-in components, which bring benchmark performance levels up to somewhere around that of the last (and admittedly also overdue for an overhaul) Mac Pro, the company’s also added more user upgradability — never a given for an Apple product.

Also notable here are the crazy number of ports available on the rear of the device. There are two full USB 3 ports here, which is good news as far as backward compatibility with older accessories. Admittedly, I utilized both immediately to hardwire a keyboard and trackpad — pretty important, so far as most desktop computing is concerned. Of course, you can also go the wireless route or invest in the inevitable adapter.

HDMI 2.0 is present here, as well, along with a headphone jack — that once-ubiquitous port, which is hanging on for dear life on the Mac line. Fingers crossed that sticks around for good. The ability to plug in wired headphones is just too important for those creative audio pros who rely on Apple desktops and laptops to go away soon. Though, naturally, stranger things have happened.

The biggest turn on the I/O side of things, however, is the inclusion of an impressive four Thunderbolt 3 ports. That’s the same number found on the iMac Pro and twice as many as you get on the 2017 standard iMac. It opens things up to a lot more computing versatility. As far as my own desk is concerned, I welcome the ability to power the LG 4K monitor Apple sent along for testing purposes. 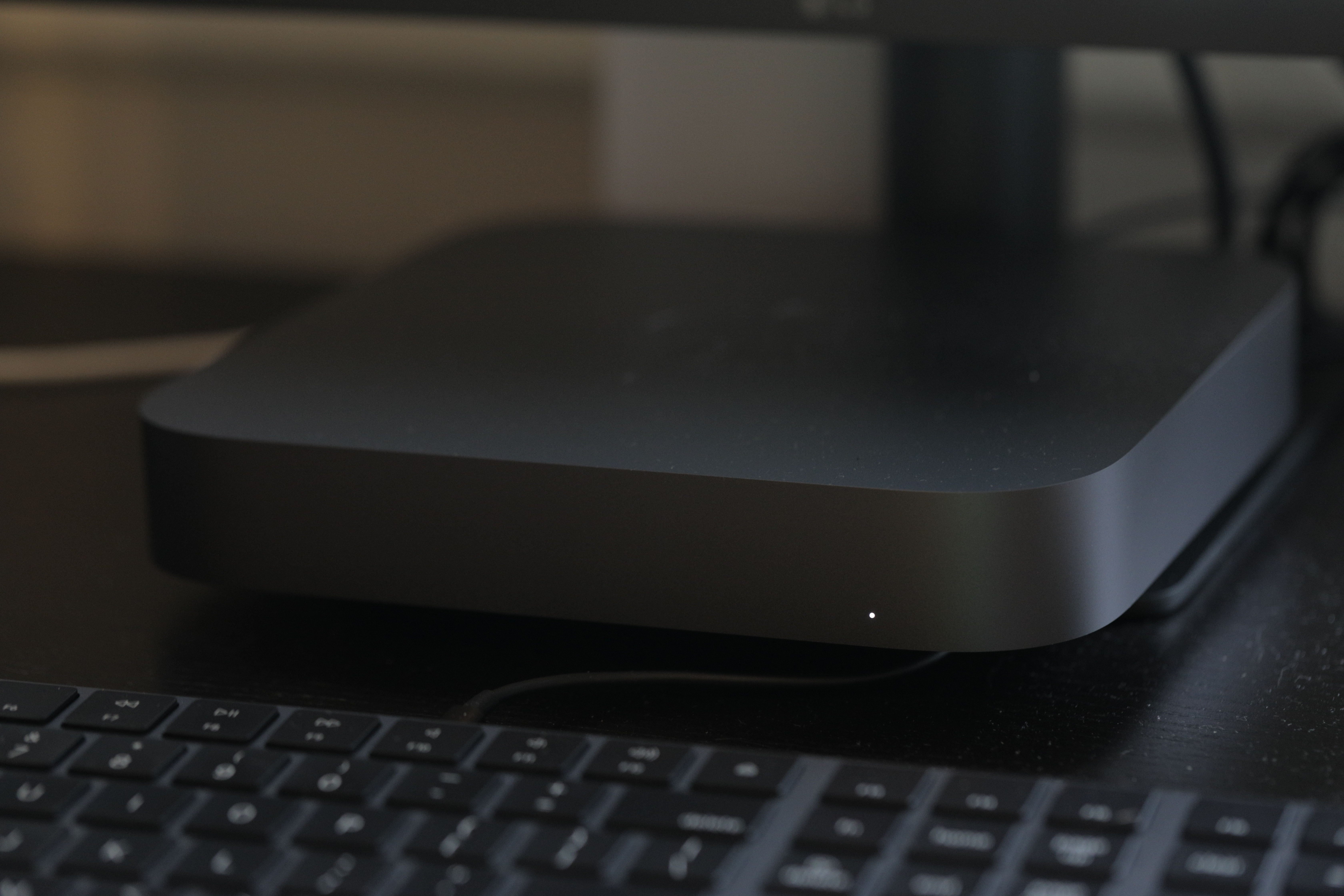 Lord knows the last thing I need is another thing to plug into my already overworked power strip. I would include a photo here were it not already a source of great shame. There’s enough power to support two 4K displays or one 5K. If you’re feeling crazy, you can also plug in a third 4K screen via the HDMI port. For now, however, I’m using the additional ports to charge up devices.

The internal graphics have been overhauled, with the Intel UHD Graphics 630 promising a bump of up to 60 percent over the last gen. Though the Cinebench score of ~530cb puts it roughly in line with the latest iMac (not Pro).

This is another place you’re going to want to potentially turn to those Thunderbolt ports, by hooking up an external GPU or two. In fact, it wasn’t mentioned onstage, but hardware partner Blackmagic launched a second Apple-focused eGPU the same day as the event, this time with a much-improved Radeon RX Vega 56 card (and a price increase to match).

That’s a nice step toward the company’s growing ambition to become a more serious gaming platform. But more to the point with a system like this, it’s an important upgrade for users performing more graphic resource-intensive tasks like photo and video editing. Apple’s also be pushing to be a content creation platform for even heavier lifts like VR production. Even with the external GPU, however, those users are going to want to consider an Apple product with “Pro” in the title, coupled with one of the aforementioned external GPUs. 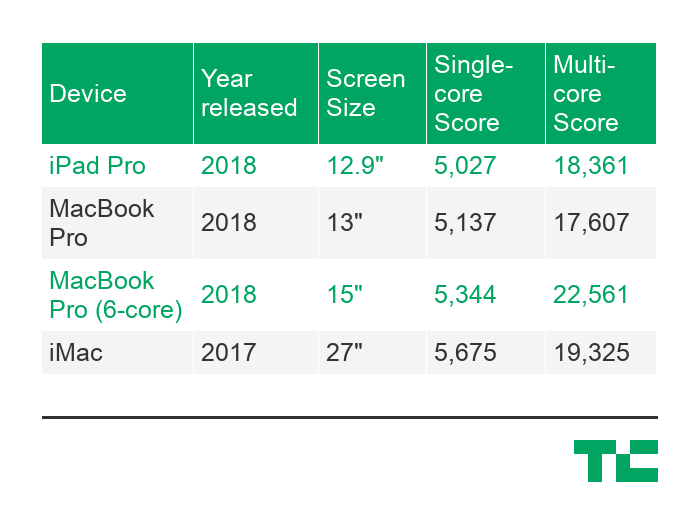 Our unit came loaded with 8GB — the entry-level configuration, not to mention the same (albeit faster) amount offered on the 2014 model. You can, however, octuple that (for a price) either at checkout, or later, by cracking it open and replacing it yourself. The storage (which is entirely solid state now), isn’t user replaceable, but can be bumped up to 2TB on the site.

Priced as configured, our unit runs $799, making it the entry-level version. That’s a quad-core 3.6GHz Intel Core i3, 8GB of RAM  and 128GB of storage. Performance-wise, I got a 4685 single-core and 13952 multi-core on Geekbench. That’s a marked improvement over the 2014 version, naturally, but can’t touch, say the high-end 2018 MacBook Pro. You’re going to want to bump it up to the Core i7 version to hit those numbers. That one starts at $1,099. And fair warning, when speced all the way out, the system will end up running you $4,199, which is getting into iMac Pro territory. 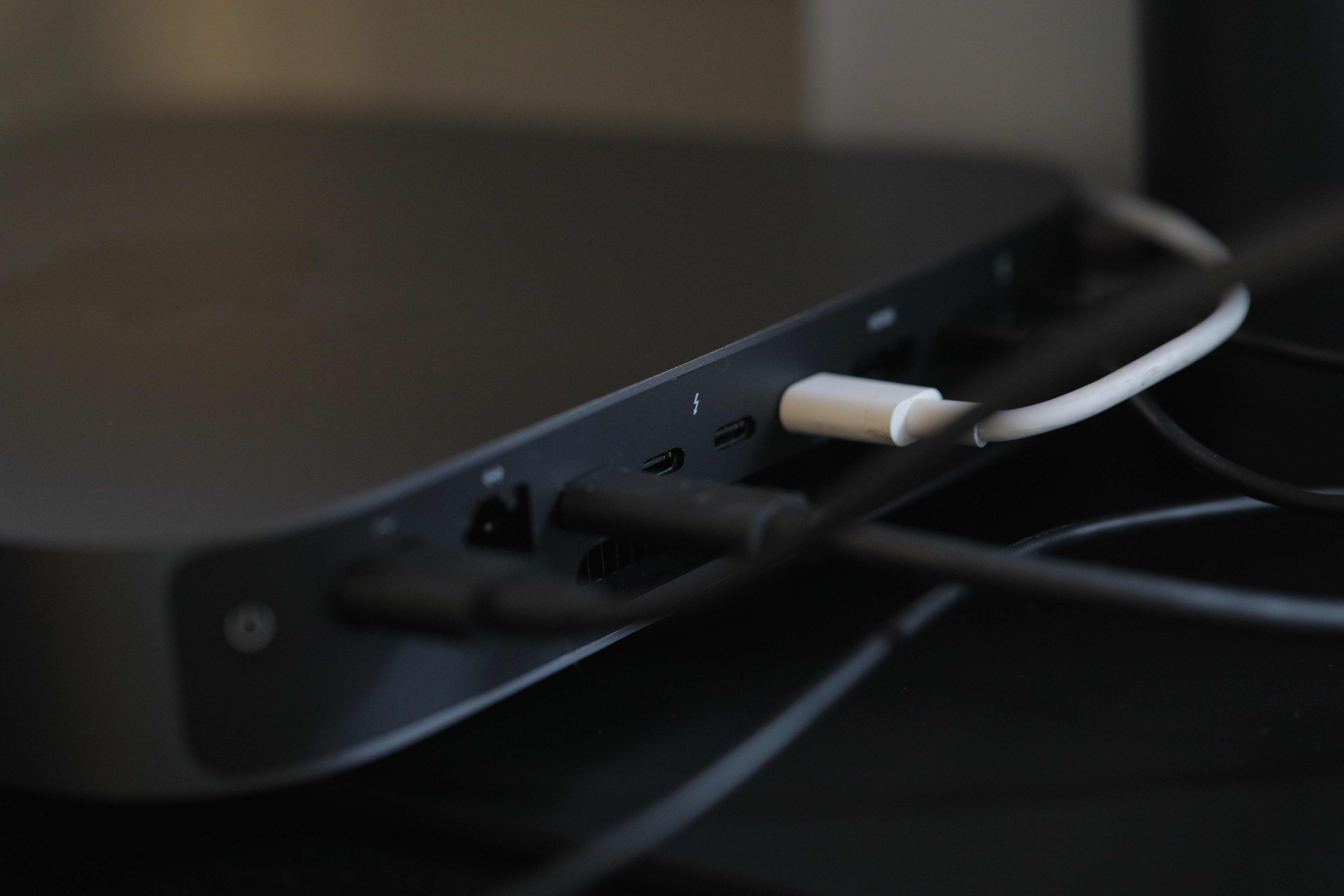 Of course, even the lowest-speced version should be plenty fine for most tasks. I’ve shifted my standard tech blogger work flow over the machine for the last couple of days and am perfectly happy with the results. On the other hand, if your workload requires anything processor or graphics intensive, you’re going to want to pimp this thing out — or seriously consider picking up a desktop with the word “Pro” in the name.

For the budget-strapped, it’s also easy to flinch at the $300 price increase on the base-level. While it’s true that the components are pricier this time, it’s hard to shake the feeling that the company has priced out the true entry-level user this time out, in favor of offering a product that’s more of a gateway into the Pro ecosystem. Though $799 still feels like a fairly reasonable price point for an Apple desktop.

It’s a tough line to walk, serving both low-end desktop users and those who need some serious processing power — it’s why, among other things, there are so many different MacBook models. The Mini, on the other hand, is admittedly more of a niche device than an Apple laptop, regardless. 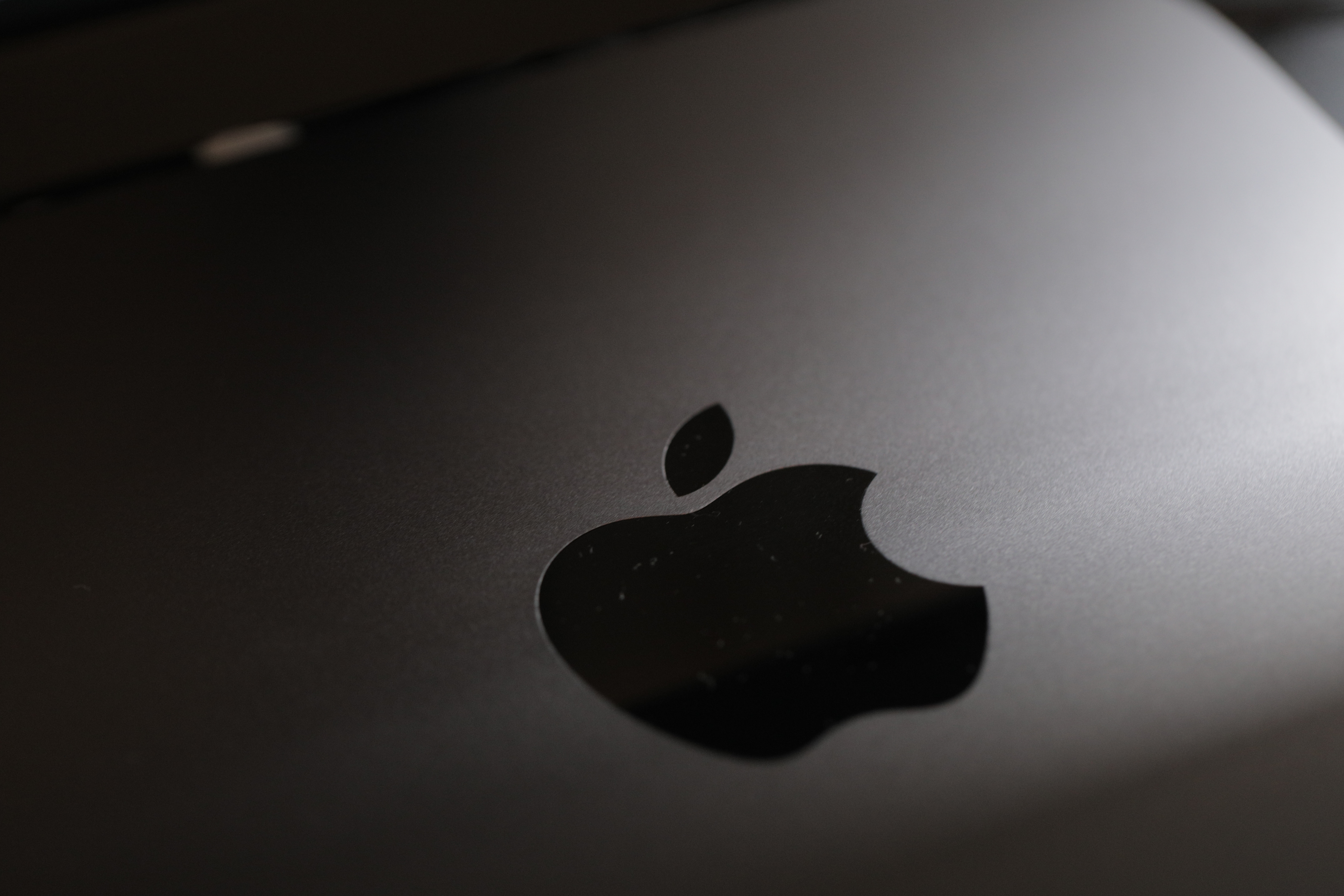 But Mini has carved an interesting niche for itself. This latest version is clearly inspired by the life the product has found outside of simply being a desktop. Apple was quick to make reference to its use in IT. The product’s small, flat design has made it an interesting candidate for a server. It’s probably a bit pricey to, say, run your entire data center on these, but if it can be done, someone has definitely done it.

That unexpected use case is a big part of the reason the company stuck to the same dimensions this time out — a number of third parties already produce accessories built to those specifics, so why not make it as easy as possible to swap out for a new unit? The footprint also means the computer is easily stackable, for workloads that require the output of multiple machines at once.

That said, it’s a really nice size for an unobtrusive addition to a desktop. As I type this, the Mini is nestled snuggling below the monitor, just in front of the keyboard. The switch to a space-gray metal both matches the aesthetic of the rest of the Mac line (not to mention the new iPad Pro) and also fits in well on my black desk.

The Mac Mini is undoubtedly a powerful upgrade over its predecessor and an interesting glimpse into the future of the Mac ecosystem. Along with the product’s pro ambitions, however, comes a higher price tag, starting at $799. The Mini is still the best-priced gateway into a desktop Mac ecosystem, but the definition of entry-level has clearly shifted for Apple since the last ‘go round.