Titan could put an end to stock market FOMO. The app chooses the best 20 stocks by scraping top hedge fund data, adds some shorts based on your personal risk profile and puts your money to work. No worrying about market fluctuations or constantly rebalancing your portfolio. You don’t have to do anything, but can get smarter about stocks thanks to its in-app explanations and research reports. Titan wants to be the easiest way to invest in stocks for a mobile generation that wants an affordable coach to guide them through the market themselves.

“Our goal is to take things that aren’t accessible [in wealth management] and make them accessible, starting with hedge funds,” says Titan co-founder Joe Percoco. That potential to democratize one of the keys to financial mobility has won Titan a $2.5 million seed round from Y Combinator’s co-founder Paul Graham, president Sam Altman and partners including Gmail creator Paul Bucheit. The rest of the capital comes from Maverick Ventures, BoxGroup and Liquid2 Ventures. 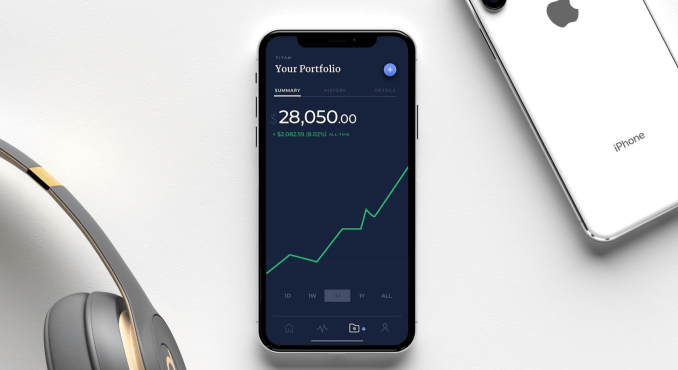 “Titan is where investing meets virality,” says Graham. “Those are two very powerful forces.” Since TechCrunch broke the news of Titan’s launch in August, it’s doubled its assets under management to $20 million and hired its first non-founder engineer.

Now it’s launching in-app educational videos so stock market dummies can get up to speed if they want to understand where their money’s going amidst a swirling see of financial news. “There are so many different headlines telling so many different narratives,” Percoco tells me. “Everyone is searching for explanations in a voice they trust. An ‘ETF’ can’t talk back. Sometimes a human face is better than writing. A video can really help people make choices.” Here’s its two-minute video about Facebook’s Q2 earnings a few months ago, explaining why the share price crashed 25 percent:

Percoco and Clayton Gardner met on their first day of Wharton business school, while their third co-founder was earning a hedge fund patent and studying computer science at Stanford. They went on to work at hedge funds and private equity firms like Goldman Sachs, but got fed up just growing the fortunes of the already rich.

So they started Titan to invent a modern, mobile version of BlackRock, the investment giant founded in the 1980s. Titan uses the public disclosures of hedge funds to find consensus around the 20 best performing stocks. With as little as $1,000, users can let Titan robo-manage their investments for a 1 percent fee on assets. Users provide some info on how big they want to gamble, and Titan personalizes their portfolio with more or less conservative shorts to hedge their bets. 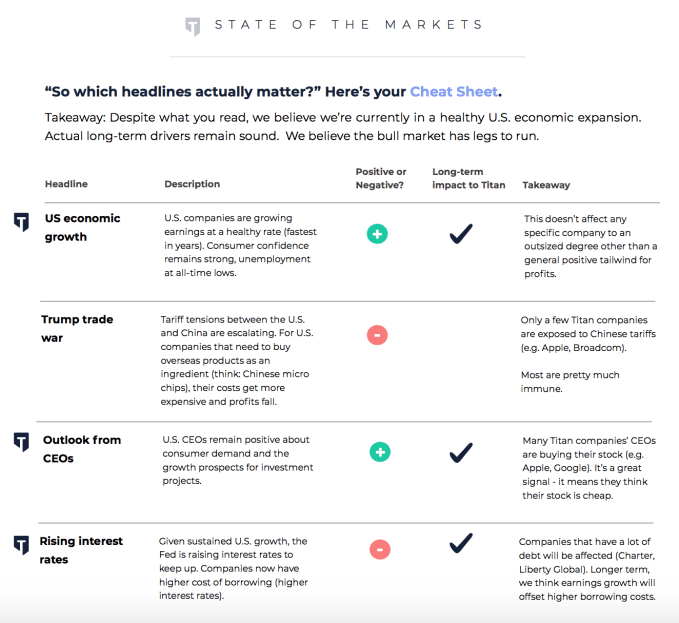 Titan’s simplicity combined with the sense of participation could help it grow quickly. It sits between do-it-yourself options like Robinhood or E*Trade, where you’re basically left to fend for yourself, and totally passive options like Wealthfront and Betterment, where you’re so divorced from your portfolio that you’re not learning. Managed hedge funds and fellow active investment vehicles like BlackRock with a human advisor can require a $100,000 minimum investment that’s too steep for millennials. 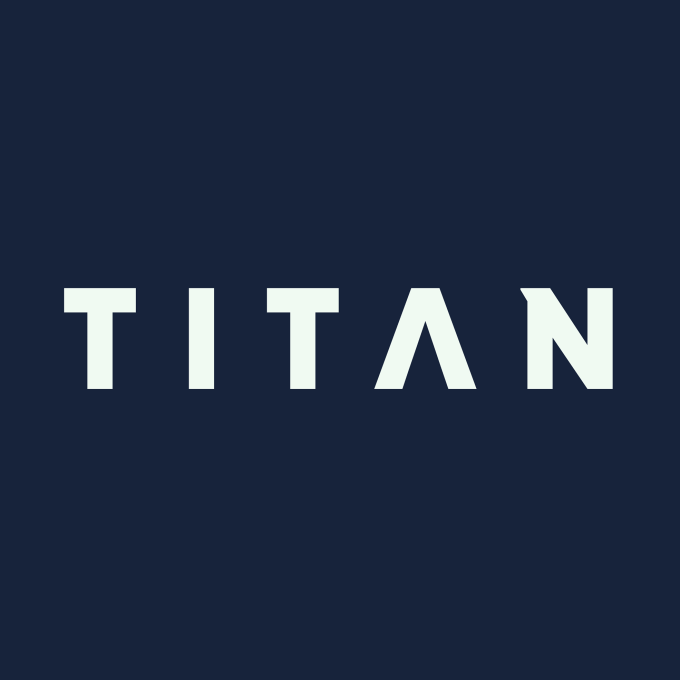 “Even the best hedge fund in the world is only going to send you a PDF every 90 days,” Percoco explains. But Titan doesn’t want you nervously checking your portfolio non-stop. “Our median user checks the app once per day.” That seems like a healthy balance between awareness and sanity. It thinks its education and informative push notifications make it worth a higher required investment and fees than Wealthfront charges.

Essentially, Titan is a stock trading auto-pilot merged with a flight simulator so you improve your finance skills without having to fear a crash. Percoco tells me the sense of accomplishment that engenders is why clients say they’re telling friends about Titan. “When I invest, I look for companies that are growing quickly and making a huge positive impact on the world. Titan is one of those companies,” investor Altman says. “I think they could improve the financial well-being of an entire generation.”