Local newspapers may be shuttering and people may be consuming most news on social media, but don’t tell Alex Mather that a subscription news publication can’t grow like a unicorn startup. His 2-year-old sports publisher The Athletic has gained over 100,000 paid subscribers (60 percent under age 34) and has a 90 percent retention rate.

Having already raised $30 million in its short life, the company announced a new $40 million Series C yesterday, led by Founders Fund and Bedrock Capital. It reportedly values The Athletic around $200 million.

I interviewed Alex Mather (The Athletic’s CEO) and Eric Stomberg (partner at Bedrock Capital) to understand what’s behind the breakout success, and why they think this publishing startup can scale to become a multi-billion dollar company.

ES: I first met Alex and Adam in 2016 during Y Combinator. The popular view then, as it remains now, was that people just aren’t willing to pay for content online and that to win in media you have to put out a high volume of free articles on social.

The Athletic took the opposite approach. It’s a narrative violation. Everything is part of a paid subscription, with the belief that instead of writers needing to post 3-4 pieces per day, they should focus on deeper stories that add value to paid subscribers over time. That worldview resonated with us. If you can create content at scale that people are willing to pay for, that’s a powerful economic engine.

There’s so much sports coverage already out there, by professionals and amateurs alike, so why are people willing to pay for The Athletic?

AM: While there appears to be an abundance of content, most of it is aggregated, shallow content for a broad audience. We produce fewer stories and target a diehard fan. Our subscribers consistently tell us that no one else produces the same depth on a daily basis.

How did you determine the $60/year price point?

AM: We think of $60/year ($5/month) as less than the average NBA ticket. It’s a meaningful price but not prohibitive, especially when we do discounts in the first year. Like all subscription companies, whether we like it or not, we have to consider how our pricing stacks up against Netflix. For $10/month, you can subscribe to Netflix which is spending $8 billion per year in content.

Is The Athletic profitable? 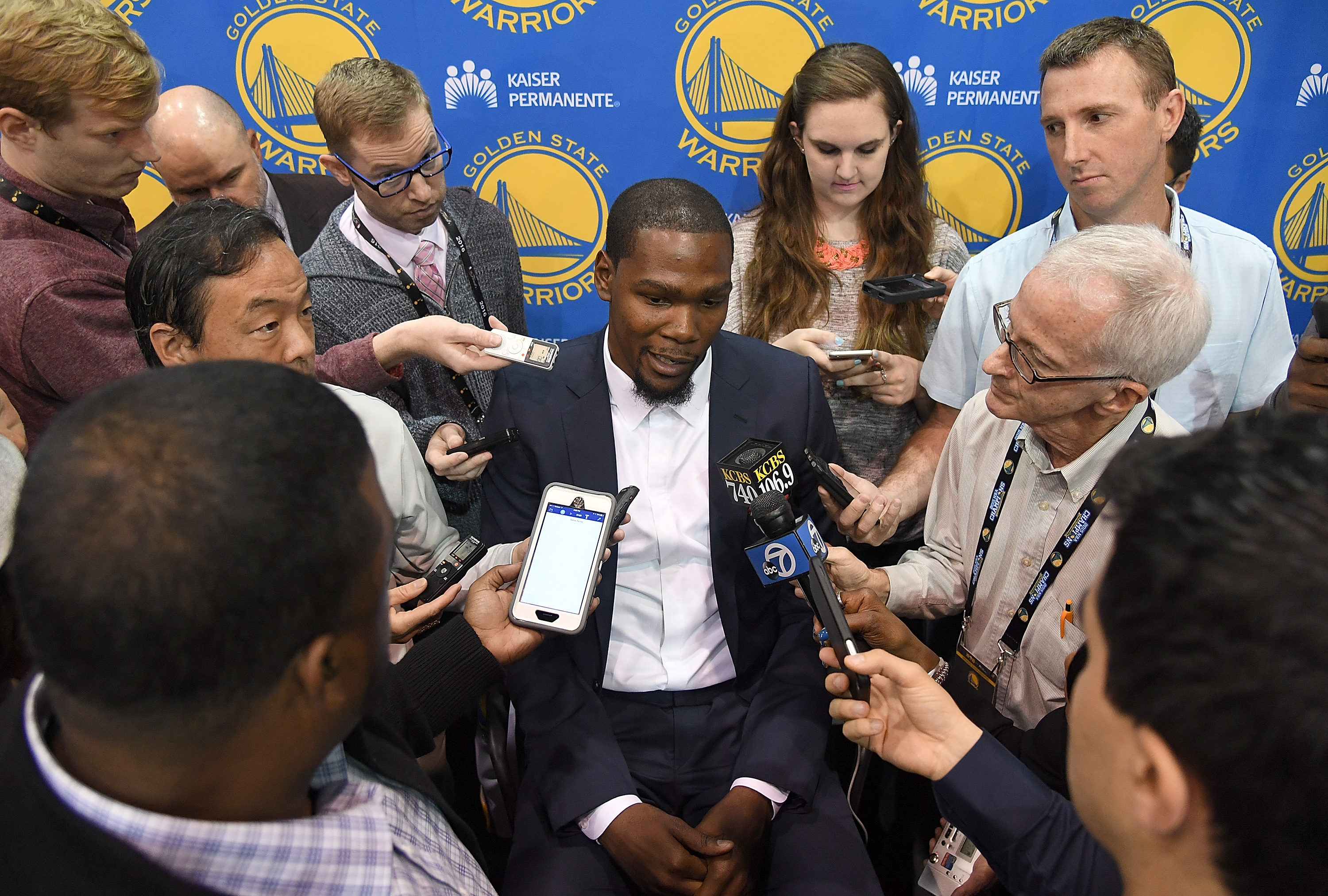 Explain your growth strategy in terms of coverage: Which sports did you start with and at which level (local versus national)?

AM: Direct-to-consumer businesses have to really work to earn their subscribers’ hard-earned money. We have to obsess over where we can be different. In the beginning, that was with hockey and baseball, because those have been de-prioritized by the bigger players. That shifted as we gained more subscribers: we needed to become comprehensive. We hired folks to cover the NBA, to cover the NFL, to cover soccer.

Do subscribers usually come just for one local sport or for the broader bundle?

AM: We’ve built a powerful bundle. A local newspaper has local politics, local restaurants, and then local sports. We have just the sports, but add a national perspective and a nationwide bundle. Most of our subscribers are “super bundlers,” meaning they subscribe to content from multiple cities plus at least one national product and usually a college product that’s not local. We provide all that for significantly less than competitors.

Eric — as a VC looking for multi-billion-dollar exits, how are you analyzing the potential scale of a subscription publication like this? Even most people who are bullish on subscriptions believe it’s a choice of going for a niche audience and staying small.

ES: There are two things we look for in a subscription business: retention and a positive flywheel.

Retention. In any subscription business, the key question is: can they maintain their subscribers over time? Most of them don’t. Spotify does, Netflix does, and The Athletic does as well. The Athletic is off the charts, which sets it up for scale. You want to see deep engagement over a very, very long period of time — years.

A positive flywheel. The more you build your subscriber base, the more you build your revenue base. That allows you to get better content, to hire unique writers, to build greater depth. In doing so, you attract people who weren’t ready to subscribe in the early days but now you have writers they follow and content they want. Technology is important here too: as you build a bigger platform with more content, serving the right content at the right time to each user is a key advantage. When this flywheel is working it’s actually quite hard to put a ceiling on the business.

Most publishers did a so-called “pivot to video” over the last couple of years. You’re anchored in writing. Why not more video at the start?

AM: We’re obsessed with the consumer and all our research in the beginning said that people still like to read books and articles. Advertising with text may not be as good as with video, which may be why so many other companies “pivoted to video,” but we think the written word is still the best way to convey certain types of stories. It’s straightforward, it doesn’t require headphones.

There’s an incredible amount of talent out there that can produce these stories and that has been cast aside by many entities. We saw it as an opportunity to give them great jobs and bring value to our subscribers. That has paid off for us. 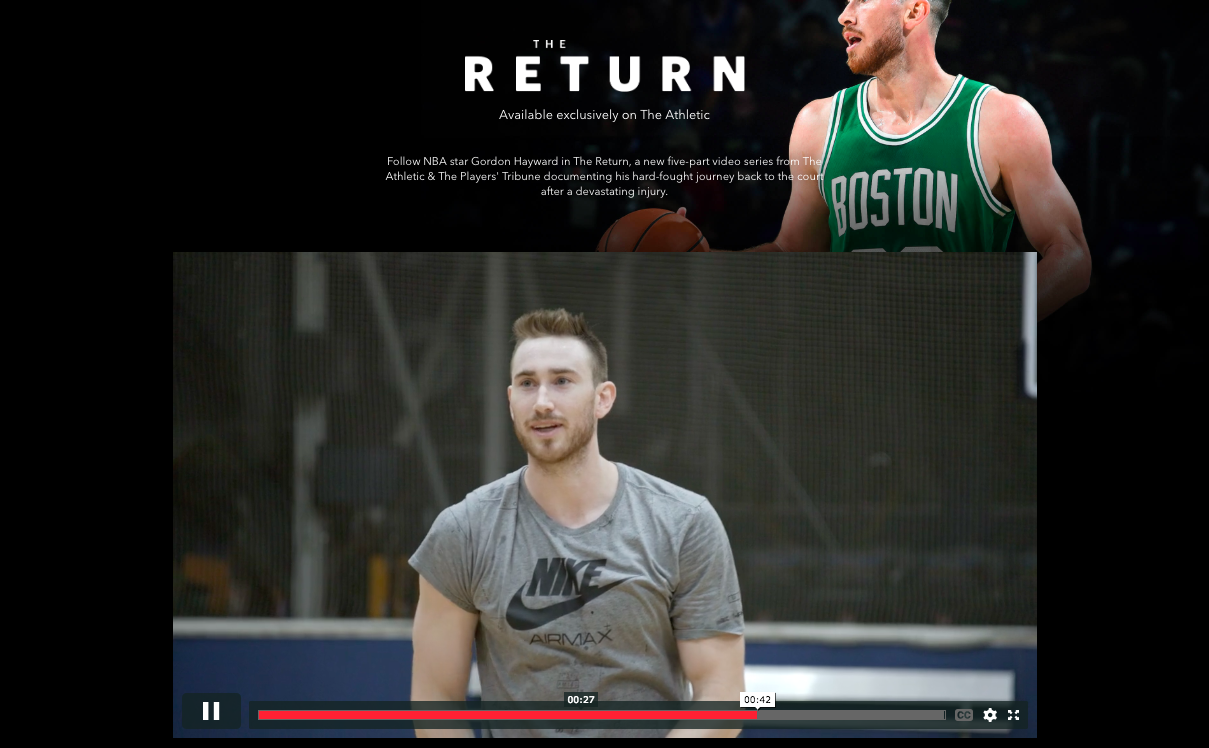 What are your plans for video or other content formats in the future?

AM: We raised this Series C with audio and video in mind. We can tell even more stories when we add in audio and video possibilities. Our goal is to serve the subscriber: some love to read, some love to listen, others prefer to watch. We look up to things like The Ringer, Andre the Giant on HBO, VICE News, Gimlet, and The Daily by The New York Times all as incredible storytelling, and we ask ourselves “how can we do sports versions of those?”

Why focus on hiring experienced, full-time writers rather than a stable of contributors or curating from the vast pool of content by fans? Lots of amateurs pay close attention to sports.

AM: What’s really important to us is a growth mentality — that by Day 100 on our team a writer is thinking very differently. We’re providing lots of data, lots of feedback. We invest in great people who will figure this out with us over time. Also, scaling so quickly from 0 to 300 editorial staff was possible because we recruited experienced talent who know what to do already.

We do have about 400 contributors as well. These are folks who may be lawyers or accountants but are passionate about the teams they cover. We are a way for them to reach a premium audience. We can pay them really well and give them world-class editors formerly with Sports Illustrated and ESPN.

How are you acquiring your subscribers?

AM: When we expand into a new market, we gain new subscribers by hiring writers who have a following already and by word of mouth from existing subscribers. Then like any direct-to-consumer brand, we are acquiring subscribers through Google, Facebook and Twitter.

You financially incentivize your writers based on them acquiring new subscribers through their articles or by promoting The Athletic with their followers online. That is very uncommon in publishing. Explain that strategy.

AM: It ties back to our focus on building for the long term and investing in talent that will grow with us. We like to assign incentives that give us the best chance of building a sustainable business and we think about compensation in that way. We give our team equity in the company and for many, we tie a portion of their comp to the performance of their team, sport, city. It’s a great way to share in the responsibility and success of the business. 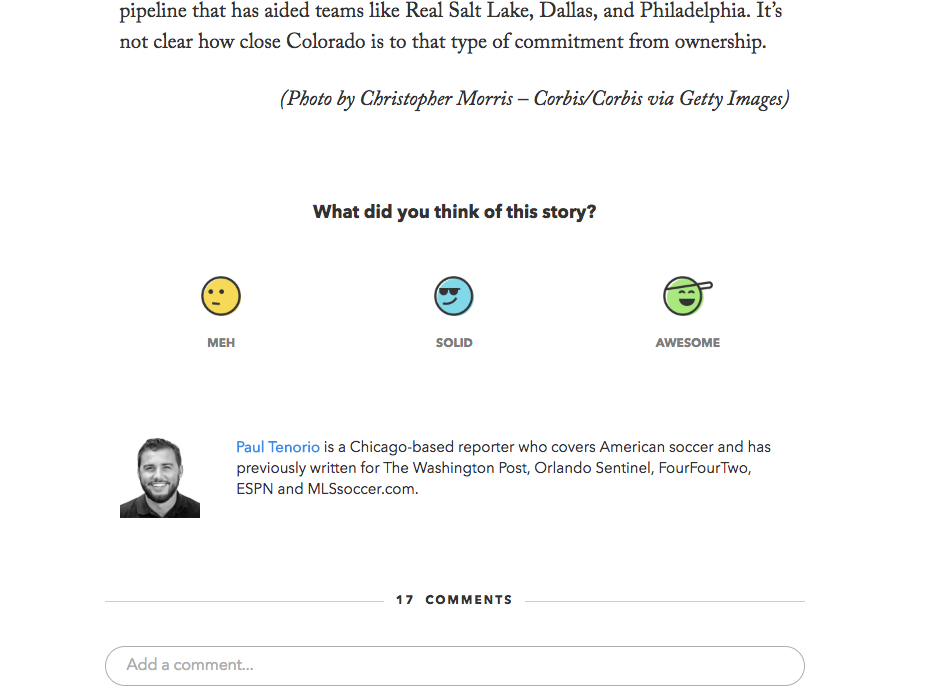 At the bottom of articles, you ask readers to rate each story as “Meh,” “Solid,” or “Awesome.” I wish every publisher did this. How do you use this data? How do a writer’s scores impact them?

AM: It’s about feedback loops. Our writers gauge feedback when they share on Twitter. This is another data point. It helps paint a more complete picture. NPS alone isn’t enough of course though. We look at whether articles drive new subscribers, drive deep engagement, drive comments, etc. We don’t use pageviews, but we certainly use metrics. Usually, this results in a writer producing very different work on Day 100 than they were on Day 0.