Global investment giant KKR is warming up to Southeast Asia after it made a third high-profile investment. The firm — which has nearly $150 billion in assets under management — has cut a SG$200 million (US$144 million) check for PropertyGuru, the region’s largest property listings group.

Founded in 2006, PropertyGuru operates rental and sale listing sites in Singapore, Malaysia, Indonesia and Thailand. Prior to today’s deal (its Series D), its most recent investment came in 2015, when it raised SG$175 million from backers including TPG and Australia’s Square Peg. This new financing takes it to SG$440 million (or around $320 million) thus far. You’d imagine that the deal values PropertyGuru at/above $1 billion — the much-vaunted unicorn milestone — but the company has declined to reveal its valuation at this point.

It isn’t talking about its valuation, but PropertyGuru CEO Hari V. Krishnan did say in a statement, however, that the company is profitable, cash flow positive and seeing revenue grow at 25 percent per year. The firm claims to have a dominant 55 percent market share in the countries it operates in and it is actively working to expand that reach in Southeast Asia, a region of more than 600 million consumers that has more internet users than the population of the U.S.

Indeed, in tandem with the funding news, PropertyGuru said it has completed the buyout of Vietnam-based property portal Batdongsan.com.vn, which it claims is the country’s largest property portal with more than four million unique visitors per month. The site will join PropertyGuru’s collection of business through the deal, which is undisclosed and follows a strategic investment back in 2016. 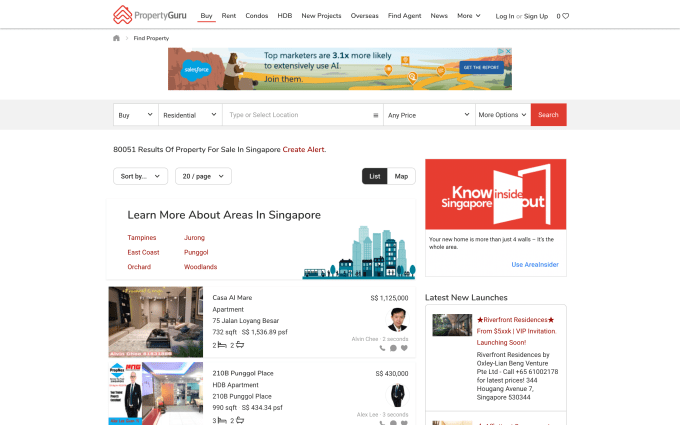 For KKR, this investment in the latest in a series of early bets that the firm has made on digital startups in Southeast Asia. The firm has put money into Indonesian ridesharing giant Go-Jek, which is backed by the likes of Tencent and Google and now said to be worth $9 billion, and Philippines-based fintech venture Voyager, which is also backed by Tencent following a recent $175 million deal. It also invested in Thailand-based e-commerce enabler aCommerce via its Emerald Media fund last year.

In a statement, KKR’s head of Southeast Asia, Ashish Shastry, paid tribute to PropertyGuru, which he said has “clearly established itself as the Southeast Asian champion in the online property space.”

PropertyGuru is not alone in digitizing real estate, and its rivals in Southeast Asia include iProperty, a business that’s listed on the ASX in Australia, and Singapore-based startup 99.co — which counts Facebook co-founder Eduardo Saverin among its backers and had a litigation battle with PropertyGuru. There are, of course, plenty of single-market businesses that operate across various Southeast Asian countries.