Uber is back in court in the UK today and tomorrow to try once again to overturn a  two year old employment tribunal ruling that judged a group of Uber drivers to be workers — meaning they’re entitled to workers benefits such as holiday pay, paid rest breaks and the national minimum wage.

Uber lost its first appeal against the ruling last year but has said it will continue to appeal.

On Sunday the GMB Union calculated that Uber drivers in the UK are £18,000 out of pocket as a result of the company continuing to fight the rights judgement, rather than paying the additional entitlements.

In a statement Sue Harris, GMB legal director, said: “These figures lay bare the human cost of Uber continuing to refuse to accept the ruling of the courts. While the company are wasting money losing appeal after appeal, their drivers are up to £18,000 out of pocket for the last two years alone.

“That’s thousands of drivers struggling to pay their rent, or feed their families. It’s time Uber admits defeat and pays up. The company needs to stop wasting money dragging its lost cause through the courts. Instead, Uber should do the decent thing and give drivers the rights to which those courts have already said they are legally entitled.”

Uber has previously suggested it would cost its UK business “tens of millions” of pounds if it reclassified the circa 50,000 ‘self-employed’ drivers operating on its platform as Limb (b) workers — an existing employment categorization that sits between ‘self-employed’ and ‘worker’.

The GMB Union notes that in Uber London’s latest accounts, released last week, it warns shareholders that it faces “numerous legal and regulatory risks”, both pertaining to existing regulations and the development of new regulations, as well as as a result of “claims and litigation” related to its classification of drivers as independent contractors.

This year the UK government has signalled a high level intent to bolster rights for more types of workers.

In February it announced a package of labor market reforms intended to respond to changing working patterns — saying it would expand workers rights for millions of workers and touting tighter enforcement.

Though it continues to consult on the issue, to shape the detail of its response, and it’s likely the Uber litigation will feed into government thinking given the timing of the case.

This month Uber drivers in the UK staged a one-day strike over pay and conditions, piling more pressure on the issue and calling for the company to immediately apply the tribunal judgement and implement employment conditions that respect worker rights for drivers.

Uber responded by pointing to changes it has made since the original tribunal ruling — including expanding a free insurance product it now offers to drivers and couriers across Europe.

It also claims to have changed how it takes feedback from drivers, and flagged a number of tweaks to its app it claims help drivers access data insights to boost their earnings.

We’ve reached out to Uber for comment on the latest stage of its appeal. Update: A company spokesperson sent us the following statement:

Almost all taxi and private hire drivers have been self-employed for decades, long before our app existed. A recent Oxford University study found that drivers make more than the London Living Wage and want to keep the freedom to choose if, when and where they drive. If drivers were classed as workers they would inevitably lose some of the freedom and flexibility that comes with being their own boss.

We believe the Employment Appeal Tribunal last year fundamentally misunderstood how we operate. For example, they relied on the assertion that drivers are required to take 80% of trips sent to them when logged into the app, which has never been the case in the UK.

Over the last two years we’ve made many changes to give drivers even more control over how they use the app, alongside more security through sickness, maternity and paternity protections. We’ll keep listening to drivers and introduce further improvements.

The Independent Workers’ Union of Great Britain (IWGB), which is defending the tribunal judgement at the hearings this week, backing former Uber drivers and co-claimants Yaseen Aslam and James Farrar, who brought the original case, has organized a demonstration to coincide with the hearing.

It says it expects hundreds of “precarious workers” — i.e. people who labor in the so-called ‘gig economy’ — to march through London in solidarity with the drivers and demand an end to all work that undermines workers rights. 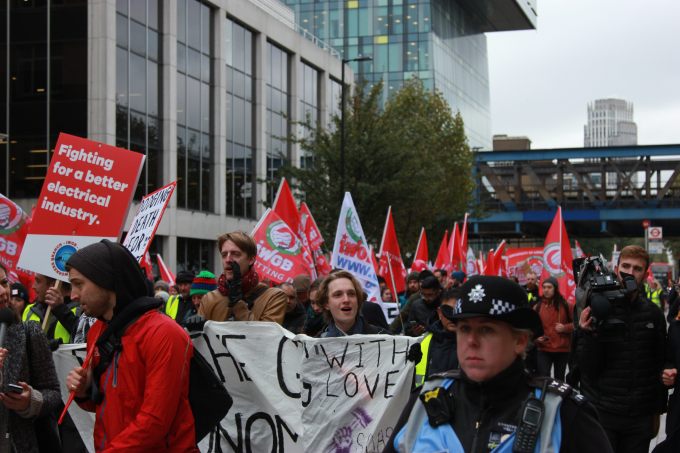 The march is also being backed by the left-leaning UK political organization Momentum, the Communications Workers Union, War On Want, Bakers Food and Allied Workers Union and United Voices of the World, among others.

A parallel event is being held in Glasgow to coincide with the hearing.

Commenting in a statement, IWGB United Private Hire Drivers branch chair and Uber case co-claimant Farrar said: “It’s two years since we beat Uber at the Employment Tribunal, yet minicab drivers all over the UK are still waiting for justice, while Uber exhausts endless appeals. As the government ignores this mounting crisis, it’s been left to workers to fix this broken system and bring rogue bosses to account. If anything gives me hope, it is the rising tide of precarious workers that are organising and demanding a fair deal.”

IWGB general secretary Jason Moyer Lee added: “Precarious workers are getting hammered in this country. The protest is the articulation of the legitimate grievance of those who are being denied the basic rights and dignities at work that we should all be able to take for granted.”