It’s not broke, but Google is fixing it. As it announced last month, Google is rebranding Google Feed, its news landing page on Android and in the Google app, to be called Google Discover. Throwing minimalism out the window, Google Discover will replace the iconically spartan Google.com homepage on mobile. 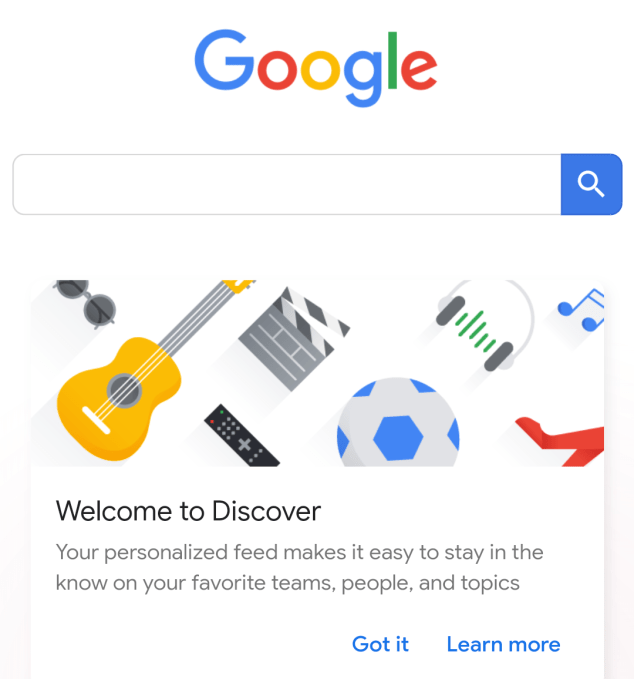 Discover is rolling out now on Google.com across both iOS and Android devices. For Android users, Discover is already baked into the interface, accessible by swiping right from the home screen. Anyone using the Google app on iOS or Android will also be met with the Discover homepage, which should be familiar at this point. We’ve reached out to Google for more details on who will see Discover when.

For a company that at times struggles with filtering disinformation out of its search results, making Discover so prominent might not be a well-timed choice. The Discover results generally resurface stuff that a user has already expressed interest in, but those results are culled from a broad enough pool of sources that they don’t always feel relevant. Hopefully Google has enough sentient humans on its teams to avert future algorithmic catastrophe, though we’re not holding our breath for Google or any social platform on that count.

If you’re using Discover through the Google app, you can customize your feed further, adding topics to subscribe to, weather, commute info and more. If you’re a sports fan, the “teams” feature is genuinely useful. If Google’s vast collective knowledge of your predilections creeps you out (and it should) but you still like the Google app, you can disable “Web & App Activity” for a bit more peace of mind by following these instructions — just do them backward.