During early voting in some Texas counties, a handful of voters reported seeing their straight-ticket votes changed to endorse the opposing party. Others reported that an issue with the voting machines appeared to remove any selection for U.S. Senate altogether.

The Texas Secretary of State’s office told TechCrunch that it has received “15-20 calls” from voters this week who reported being affected by the issue. All of those individuals caught the mistake and were able to correct their ballots before casting them, though that does not account for unreported instances in which voters did not notice the changed votes. In Texas, the Secretary of State serves as the chief elections officer.

🚨 ALERT: We have received multiple reports from voters who voted straight-ticket, then saw on a later screen that their votes were changed to that of the opposite party. You must check your ballot before casting to ensure it’s correct, and you can ask a poll worker for help.

The issue is specific to Hart eSlates, electronic voting systems created by major voting machine vendor Hart Intercivic. The Secretary of State’s office maintains that this issue is “not due to a malfunction with the machine” but rather is a result of user error. Across Texas, 82 counties use Hart eSlate machines though only Harris, Travis, McLennan, Montgomery, Tarrant and Fort Bend counties have reported issues.

“I adamantly believe there is evidence that some votes in Texas have not been counted because of defective electronic voting machines, undermining the accuracy and fairness of our elections,” Texas Democratic Party Chair Boyd Richie said of the 2008 decision at the time.

The current Secretary of State maintains that there are safeguards in place to address concerns, urging voters to review their ballot before it is cast.

“The Hart eSlate machines are not malfunctioning, the problems being reported are a result of user error – usually voters hitting a button or using the selection wheel before the screen is finished rendering,” said Sam Taylor, Texas Secretary of State Communications Director.

Taylor added that the Secretary of State’s office has given instructions to election administrators to address the issue with signage, trained election officials on these issues and required county officials to maintain “a meticulous log of any malfunctioning machines, and remove any machines that are malfunctioning.”

The eSlate is a direct recording electronic (DRE) voting machine that employs a selection wheel and five buttons in lieu of a touchscreen. 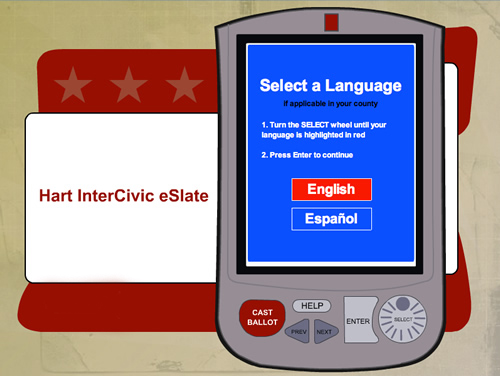 In a 2017 paper, two researchers at Rice University examined the usability of Hart’s eSlate devices, which have been touted for their ease of use by the manufacturer and counties that have adopted them. The research cites a 2008 study of 1500 voters that saw the Hart eSlate rank the lowest for ease of use out of six commonly used electronic voting systems.

“There is evidence, both anecdotal and experimental, suggesting that the eSlate is not particularly usable,” the paper’s authors wrote. “Counties are already spending a great deal of money on the eSlate and using the systems in elections despite potential usability issues that could lead to longer voter times… and mistakes made by voters while making selections on ballots.”

In 2008, a whistleblower at Hart Intercivic filed a lawsuit (William R. Singer v. Hart InterCivic) accusing the company of “false statements… regarding the accuracy, testing, reliability, and security of its voting system, in an effort to secure federal monies.” The lawsuit dissolved after a Supreme Court decision that hobbled cases brought forth by whistleblowers.

Keith Ingram, director of the Texas Secretary of State’s Elections Division, issued a full advisory on the eSlate error:

“We have heard from a number of people voting on Hart eSlate machines that when they voted straight ticket, it appeared to them that the machine had changed one or more of their selections to a candidate from a different party. This can be caused by the voter taking keyboard actions before a page has fully appeared on the eSlate, thereby de-selecting the pre-filled selection of that party’s candidate.

When TechCrunch asked about the Secretary of State’s plans to address the known Hart eSlate issue, whether by replacing affected systems or through a firmware update, the office directed us to speak with Hart Intercivic, the machine’s manufacturer. “The eSlate simply records the voter’s inputs; it does not, and cannot, ‘flip’ or ‘switch’ votes,” the company told the Dallas Morning News in an email. Hart Intercivic did not respond to our request for comment.

“All machines must be certified by the US Election Assistance Commission and then our office before being put to use in Elections,” Taylor said. “It’s a very widespread misconception that our office has the ability to simply ‘update’ the machines.”

According to the Waco Tribune, McLennan County Elections Administrator Kathy Van Wolfe said that while she has received calls in the past elections regarding the same issue she has not had any yet this year.