In a clever bit of sleuthing by Corin Faife at Breaker, we find that over half of the most popular crypto blogs offer pay-for-play posts including “CEO interviews” that are not labelled as sponsored. Further, many sites offer premium services in which blog writers will repost PR content without a sponsored tag.

As I noted a few weeks ago, the crypto industry is awash with money and “journalists” are taking advantage of the naivety and dishonesty of the marketers tasked with pushing another me-too crypto product in front of an unreceptive audience. Faife received multiple emails like this one asking him to accept payment for placing articles at the places he worked, including Motherboard and Coindesk: 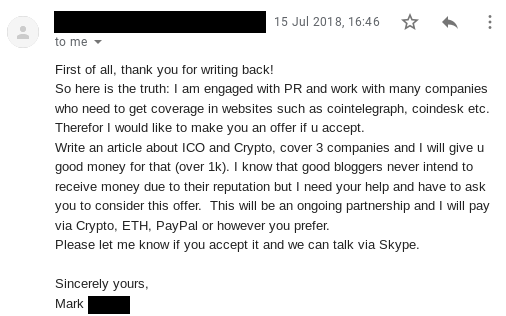 “I know that I would never take money for coverage, nor would any serious journalist. But covering the cryptocurrency industry, I read content on a daily basis that comes from a large number of outlets that I can’t vouch for. If these offers of pay-for-post are out there, can we rely on all of the journalists and editors to turn them down? Can we believe in the objectivity of the coverage we see every day, or has it simply been paid for by a company flush with cash?” he wrote. “The more I thought about it, the more it seemed like there was a simple way to find out. As a BREAKER investigation, we’d ask to pay for coverage of an ICO, and see who said yes.”

Faife reached out to 28 cryptocurrency news sites and received 22 definitive responses. Posing as a Russian PR professional, Faife first asked for rates for posting information on the site. When he received a response, he asked if the posts would have a “sponsored” tag, a traditional signal that a post wasn’t explicitly written by the news organization’s reporters.

Of the 22 replies, he received 14 agreeable responses including an offer to remove the sponsored tag for $4,500. This helpful graph from Faife’s story shows how quickly sites will abandon journalistic ethics to grab a little cash: 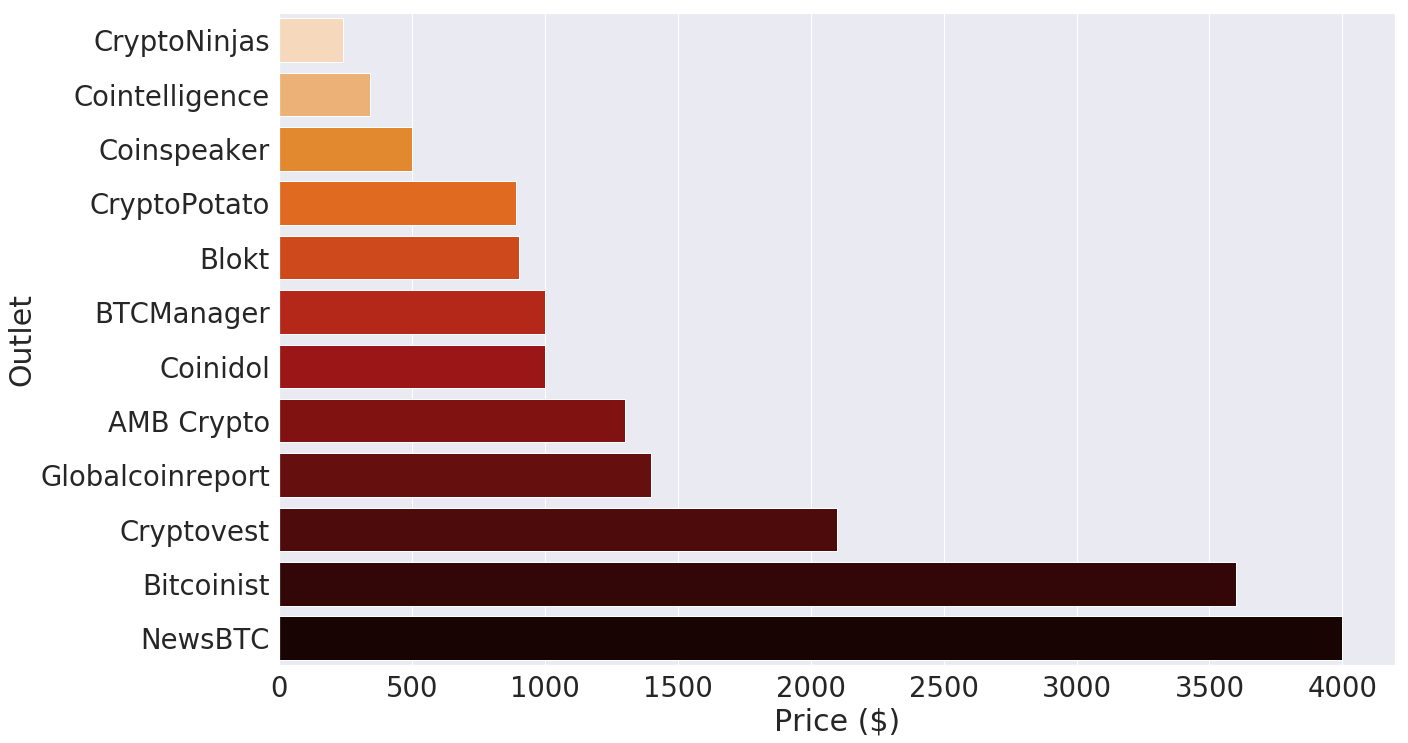 One site, NewsBTC, responded to Faife when pressed about payola:

Contacted about the story, Samuel Rae, CEO of NewsBTC, responded:

“It’s come to my attention that one of our sales team has mistakenly suggested that we could publish content without disclosure that it has been paid for (i.e. a sponsored article) to one of your undercover reporters posing as a PR agent. This is not our policy. The sales executive offering this has been removed from our company active immediately and won’t be dealing with/offering our advertising (or otherwise) services again, be it to a PR company, a reseller or anyone else.”

Pressed to offer evidence that the staff member had been removed, and to explain a second source quoting NewsBTC’s willingness to publish sponsored content without disclosure, Rae declined to give further comment.

The important thing to note here are the sums of money that many of these crypto and ICO organizations will raise thanks to a small investment in media. A solid blog post can move untrained “investors” to buy or sell crypto and tokens in an instant, creating situations ripe for pump and dump schemes where the actual level of interest in a company is clouded by payola. Most sane, mature news organizations see this problem and address it by refusing to accept paid content. That said, times are changing and the lines are blurring between paid and unpaid content. Ultimately, however, the behavior Faife uncovered is implicitly wrong.

There’s an old saying: fools and their money are soon parted. Uneducated and uninformed crypto investors are fools, but they visit crypto sites for a proper education. When news organizations create so-called fake news in order to drum up a little advertising cash, everyone loses.