Twitter came in ahead of analysts’ financial estimates in its third quarter, reporting $758 million in revenue (a 29 percent year-over-year increase) and earnings per share of 21 cents.

Analysts had predicted revenue of $703 million and EPS of 14 cents per share. Ad revenue was also up 29 percent, to $650 million, and Twitter says total ad engagements increased 50 percent year over year.

However, user growth didn’t quite match expectations, with 326 monthly active users, lower than predictions of 330 million, and also a decline from the same period last year, when Twitter had 335 million MAUs.

In the earnings release, the company says its user growth was “impacted by a number of factors including: GDPR, decisions we have made to prioritize the health of the platform and not move to paid SMS carrier relationships in certain markets, as well as a product change that reduced automated usage and a technical issue that temporarily reduced the number of notifications sent.” 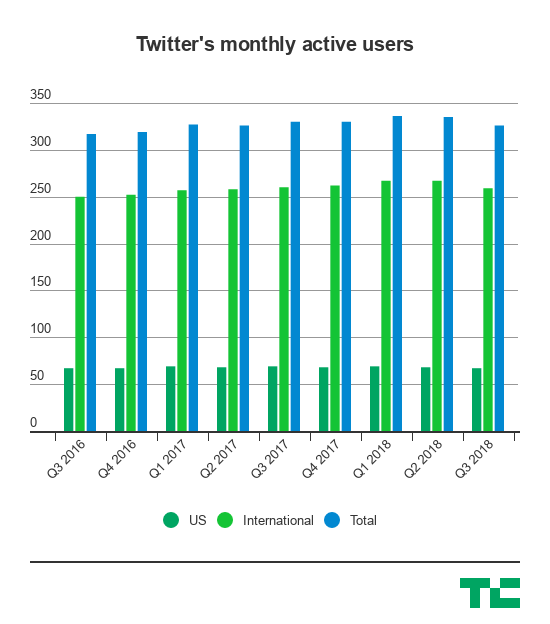 In a statement, CEO Jack Dorsey similarly suggested that the company has been focusing on the “health” of the community, rather than pursuing growth at all costs.

“We’re achieving meaningful progress in our efforts to make Twitter a healthier and valuable everyday service,” Dorsey said. “We’re doing a better job detecting and removing spammy and suspicious accounts at sign-up. We’re also continuing to introduce improvements that make it easier for people to follow events, topics and interests on Twitter, like adding support for U.S. TV shows in our new event infrastructure. This quarter’s strong results prove we can prioritize the long-term health of Twitter while growing the number of people who participate in public conversation.”

While Twitter still attracts plenty of criticism for its approach to safety, harassment and misinformation (it was slower than the other major online platforms to ban Alex Jones and Infowars, for example), it has taken steps in the past few months to suspend accounts that were “engaging in coordinated manipulation,” as well as those who tried to get around previous suspensions.

Q3 Avg MAUs were 326M, -4M y/y and -9M q/q, impacted by a number of factors including: 1) GDPR, 2) decisions we have made to prioritize the health of the platform and not move to paid SMS carrier relationships in certain markets #TWTR pic.twitter.com/TFfjRgj86b

The company says that the average number of daily active users actually increased 9 percent year-over-year, and the investor relations account tweeted that “DAU growth continues to be the best measure of our success in driving the use of Twitter as a daily utility.”

As of 7:55am Eastern, Twitter shares were up nearly 15 percent in pre-market trading.