For Dash Radio founder Scott Keeney, streaming music and radio are two very different things. On the streaming side, Apple and Spotify dominate, and “there’s not going to be room for much else.” But when it comes to radio, he argued, “It’s the wild, wild west.”

Keeney, a.k.a. DJ Skee, was already one of the biggest radio DJs when he started Dash. For him, radio is a more curated, personality-driven, “lean back” experience — so Dash Radio focuses on live shows, with a lineup of more than 400 shows across 75 stations, with big names like Snoop Dogg, Lil Wayne and Ice Cube as hosts.

The startup is announcing that it’s now reaching 10 million monthly listeners, and that it’s raised an $8.8 million seed round.

“I’m honored to be joining the board at Dash, and excited about the real change they’re driving across radio,” said Tsujihara in the funding announcement. “With their great leadership team, terrific original curated content and an offering unmatched in the market, Dash is positioned to disrupt analog radio and convert listeners to Dash users.” 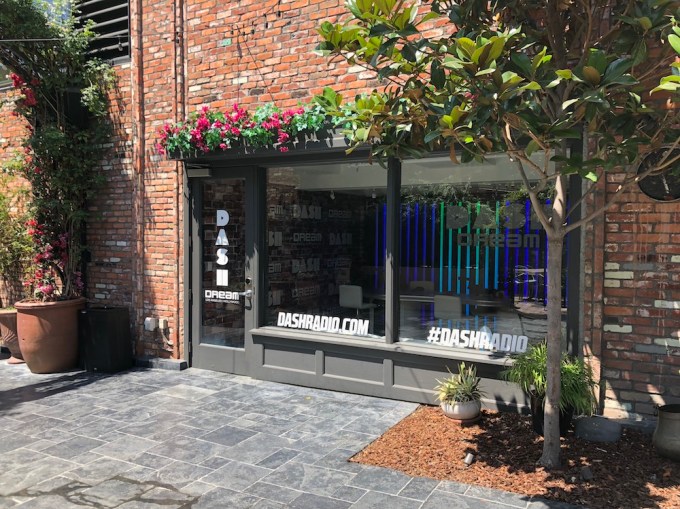 Speaking of analog radio, Keeney acknowledged that there are other services (like iHeartRadio) that bring live radio broadcasts online, but he suggested that they’re coming from “legacy players” who are “all burdened by legacy infrastructure.”

Dash is able to take a different approach. For one thing, it’s cut out the long stretches of advertising — as Keeney put it, “We figured a business model that goes around these traditional insertion-based advertising models.”

That doesn’t means it’s avoiding sponsorships. In fact, it recently opened a studio in the Empire State Building (it already has a studio in Los Angeles) in partnership with Build-A-Bear, which also operates a branded kids’ station on Dash. What Dash isn’t going to do is interrupt the music and shows with ads.

He made it clear that if Dash really is going to be the future of radio, it needs to allow new talent to succeed as well. That includes surfacing new artists (Keeney said Post Malone’s first radio interview was on Dash), and also new DJs. After all, Snoop Dogg is “an incredible talent,” but he’s never going to be known primarily as a Dash Radio personality.

“Now we’re starting to see people emerging, they are going to be known as somebody from Dash Radio,” Keeney said.