YouTube CEO Susan Wojcicki published her quarterly letter to creators today, which included very strong language regarding the EU’s controversial copyright reform directive. Specifically, her letter focused on Article 13, the so-called “meme ban” that states that any site with a large amount of user-generated content — like Facebook or YouTube, for example — will be responsible for taking down content that infringes on copyright. Wojcicki says the way this legislation is written could “shut down the ability” of millions of people to upload to YouTube.

The legislation she’s referring to is Article 13 of the European Union Directive on Copyright in the Digital Single Market, which the EU Parliament just recently voted to back. The Directive contains several parts, including another concerning “link tax,” which gives publishers the right to ask for paid licenses when online platforms share their articles and stories.

But YouTube is most concerned with Article 13, which impacts sites with user-generated content. In order to comply with the law, sites like YouTube would have to automatically scan and filter user uploads to ensure they aren’t in violation of copyright.

But today, users often express themselves by sampling, remixing and creating content using music, pictures and videos that would otherwise be considered copyrighted material. However, even though memes and parodies are protected by previous laws (in some countries), these upload filters wouldn’t be able to tell the difference between a copyright violation and a meme — and they’d block content that should be allowed. This is how Article 13 became to be known as the “meme ban.”

However, the language in legislation isn’t clear on how enforcement should take place — it doesn’t say, for example, that sites have to use upload filters. Others believe that YouTube’s existing Content ID system, which scans videos after upload, would be sufficient.

YouTube, for its part, seems to be believe that Article 13 will require more than the existing Content ID system to be compliant.

Writes Wojcicki, “Article 13 as written threatens to shut down the ability of millions of people — from creators like you to everyday users — to upload content to platforms like YouTube. It threatens to block users in the EU from viewing content that is already live on the channels of creators everywhere. This includes YouTube’s incredible video library of educational content, such as language classes, physics tutorials and other how-to’s.”

The CEO also says Article 13 will threaten “thousands of jobs” — meaning those of EU-based content creators, businesses, and artists.

The proposal could force platforms, like YouTube, to allow only content from a small number of large companies. It would be too risky for platforms to host content from smaller original content creators, because the platforms would now be directly liable for that content. We realize the importance of all rights holders being fairly compensated, which is why we built Content ID, and a platform to pay out all types of content owners. But the unintended consequences of article 13 will put this ecosystem at risk.

The company wants to weigh in on how the legislation is worded to protect its interests, and those of the larger creator community. Wojcicki said YouTube is committed to working with the industry to find a better way to respect the rights of copyright holders, before the language in the EU legislation is finalized by year-end.

Wojcicki urged creators and the wider YouTube community to rally against the legislation on social media, using the hashtag #SaveYourInternet.

Other changes include expansion of memberships, premieres

While YouTube’s comments on Article 13 were the key part of today’s letter, Wojcicki also updated the community on its priorities for 2018. 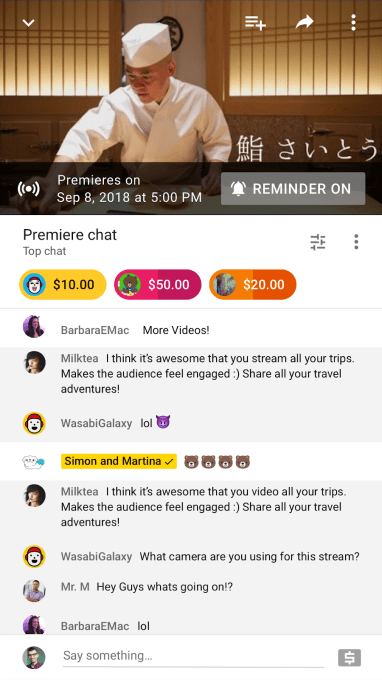 This included an update on its plans to better communicate with creators, which it says it accomplished by increasing the number of product updates and “heads up” messages regarding changes to YouTube, including smaller tests or experiments, on its @TeamYouTube handle and the Creator Insider channel, in addition to its launch of YouTube Studio, where creators can read all the news and product updates.

The company also said that its new “self certification” video upload flow, where creators self-describe the content in their videos for advertisers, will roll out more broadly in 2019.

Newly launched channel memberships are also expanding their rollout, with the threshold now being lowered from 100,000 to 50,000 subscribers. Meanwhile, the new Premieres feature is now publicly available to all creators.

Other updates focused on what YouTube is doing across education, news and journalism, YouTube Giving charity work, gaming and more. The full letter is on YouTube’s blog here.