When TrackR raised $50 million from investors that included Amazon a year ago, the Santa Barbara startup made a big splash in the growing market for small connected dongles that you could attach to “dumb” objects like keys to keep tabs on their location. But times for the company have been challenging since then. It’s weathered layoffs; a succession of natural disasters; and its co-founders stepping away from exec roles as CEO and president. Those events took their toll: we discovered that TrackR quietly closed an additional, small amount of funding earlier this year — but on a valuation of $40 million, a 73 percent drop compared to less than a year before.

Now it looks like the startup is about to enter another new phase. TrackR is launching a new brand, Adero, and sources say it is widening its focus to other uses for its tracking technology, taking TrackR beyond the circular Bluetooth fobs that form the core of its service today.

TechCrunch first learned of the brand change from an anonymous tipster, who said he’d noticed a legal name change for the company on Carta, from TrackR to Adero, “to match their new focus on home solutions.” Another source said that TrackR had been talking to retailers to sell what sounds like a larger connected home solution, although the outcome of those discussions is not clear.

We have also noticed that TrackR has been discounting its existing stock, a sign that it could be trying to clear the decks for whatever is coming next. Contacted for this story, a spokesperson did not comment on whether it would continue to sell products like the TrackR Bravo and Pixel — only that it would continue to support them.

“TrackR will continue to support all products we’ve sold into the market,” he said. “Both the battery replacement program and the Crowd Locate network are both active.”

Christian Smith, who had been the company’s president but quietly left his executive role at the startup at the end of last year, had once described a bigger vision of targeting enterprises in an IoT play, although it’s also not clear if this is part of TrackR’s plan now, or if it ever will be.

Whatever the pivot will entail, it is happening at a critical time. The company quietly raised $10 million in July, at a $40 million valuation according to Pitchbook. It was a clear downround: TrackR was valued at $150 million when it raised $50 million a recently as August 2017. Investors were not disclosed in the most recent funding, but previous backers of the company, in addition to Amazon, include Foundry Group, NTT, and Revolution.

“As our valuation reflects, at the start of this year, we made a conscious decision with the support of our board to build a new future instead of chasing incremental growth,” a spokesperson said of the reduced valuation. “The future we’re building revolves around helping our users proactively manage the chaos of life. We’re excited to reveal the first chapter of our new story in a few weeks.”

TrackR is expected to make an official announcement of its plans towards the end of November, we understand. It declined to comment on the new brand or direction for this article.

But we found a trail of records connecting TrackR to Adero dating from the middle of this year — an indication that the startup has been working on this strategy for at least six months.

Starting in May 2018, Trackr registered three trademarks for Adero. One filed in May of this year describes Adero in fairly generic terms: “Telecommunications services, namely, electronic transmission of data, messages, graphics, images, audio, video and information among users relating to locating, managing, organizing, and tracking assets, devices, and objects.”

A third describes hardware to manage such a service.

Trackr also registered separate trademarks around the same time is for a brand called “Activefield,” which might be one of the components of the Adero solution. (Its descriptions match those of the Adero trademarks.) 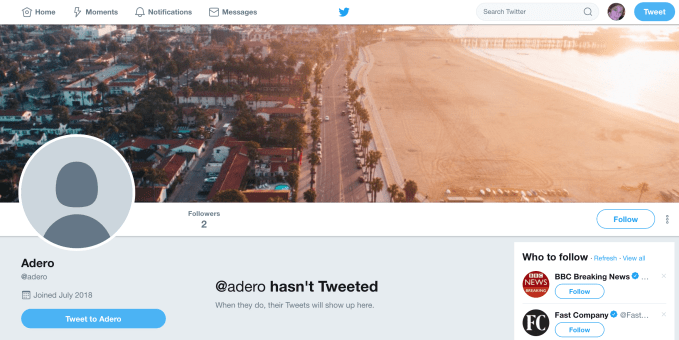 In addition to that, a Twitter profile for Adero features a picture of Santa Barbara — the homebase of Trackr. And ownership of the Adero.com domain, meanwhile, was transferred in May 2018, although the owner is not listed publicly (not unusual with domain applications). (An older Adero that some might remember was a telecoms company that had raised nearly $97 million in the first dot-com wave but then — like so many other startups of the time — shut down.)

Trackr’s shift speaks to some of the challenges that have hung over the market for IoT when it comes to consumer services.

There is a lot of exciting potential in having all of the physical things in your world able to “speak” and for you to be able to control them by way of data, but there are also hurdles.

To name just two, the market is full of competition, not just between lookalike dongles, but also between a wide range of products that are all getting connectivity built into them, removing the need for the dongle to begin with. This all makes for difficult margins.

Second, although we have seen a flood of products hit the market, it’s still early days when it comes to understanding just how strong demand is for these products, and what it is that consumers ultimately will want to invest in. “Issues around interoperability, security and privacy concerns, and the cost of devices will continue to be leading inhibitors to the market’s growth,” IDC analyst Adam Wright noted in a recent report.

As it happens, both TrackR and its closest competitor Tile have reportedly had disappointing sales in key periods like the holidays, and tellingly Tile has also seen a series of recent changes.

In September, the company appointed a new CEO, CJ Prober, as it took on a new strategic investment from Comcast that points to its own efforts to widen its business beyond its square trackers. It also moved into subscription services, with the launch of a new device with a battery that can be replaced by way of a subscription.

For its part, Tile last month said that it has sold more than 15 million of its square devices, accounting for some 95 percent of the market in the US (according to estimates from NPD), while TrackR’s says on its LinkedIn page that it has shipped 8 million devices. In the wider game of economies of scale that underpins so much of the hardware business, those figures may have been the writing on the wall for TrackR.