After a disappointing second quarter, Netflix is back in Wall Street’s good graces. The company just released its third-quarter earnings report, and as of 5:30pm East Coast time, the stock is up 12 percent in after-hours trading.

The most important number here is subscriber growth, and that’s where Netflix came in way ahead of expectations, with 6.96 million net additions, compared to the 5.07 million that analysts predicted. The service now has a total of 137 million members, and 130 million paying members.

The company also reported earnings of 89 cents per share on revenue of $4 billion — analysts had predicted EPS of 68 cents.

In addition to reporting on the latest financials, Netflix’s letter to shareholders also offers an update on its original content strategy. It distinguishes between two different types of Netflix Originals — the ones like “Orange Is the New Black,” where Netflix gets the first window for distribution, and others like “Stranger Things,” where it actually owns the content.

Today, we employ hundreds of people in physical production, working on a wide variety of owned titles spread across scripted and unscripted series, kids, international content, standup, docs and feature films from all over the world. To support our efforts, we’ll need more production capacity; we recently announced the selection of ​Albuquerque, New Mexico​ as the site of a new US production hub, where we anticipate bringing $1 billion dollars in production over the next 10 years and creating up to 1,000 production jobs per year. Our internal studio is already the single largest supplier of content to Netflix (on a cash basis). 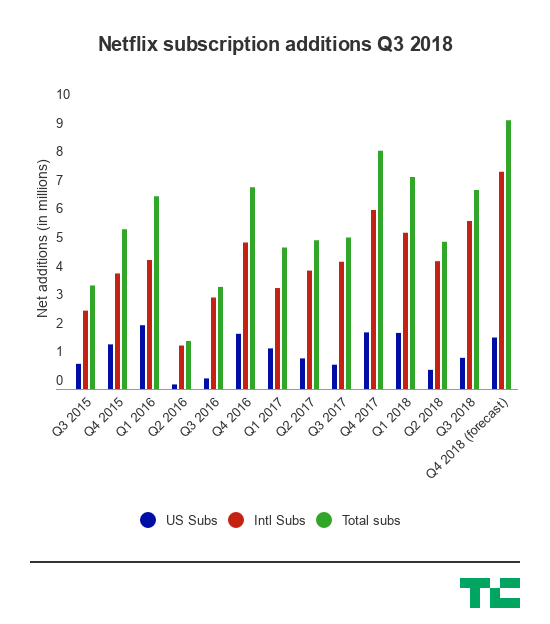 Netflix also says romance has been big recently, thanks to its “Summer of Love” slate of original films, which have been watched by more than 80 million accounts. Apparently “To All The Boys I’ve Loved Before” did particularly well, becoming one of Netflix’s most-watched original films, “with strong repeat viewing.”

The service plans to release “Gravity” director Alfonso Cuarón’s new film “Roma” in December, which has already been getting rave reviews at film festivals. While Netflix’s original movies generally have a minimal presence in theaters, the company says “Roma” (like Paul Greengrass’ “22 July”) will be released on more than 100 screens worldwide — not a blockbuster rollout, but not a perfunctory release, either.

The company is forecasting the addition of 9.4 million new members in the fourth quarter.