The venture capital business model has gone global. VC is still an exclusive club of financiers, but now with worldwide scope and scale.

Much of this global growth comes from markets outside the U.S. and Canada. A recent collaborative study between Startup Revolution and the Center for American Entrepreneurship indicates that Beijing, China was the city that contributed most to global growth in venture capital investment growth.

Here’s the geographic breakdown of projected deal volume over time. Note a somewhat choppy growth pattern in U.S. and Canadian deal volume, and compare that to a more consistent growth pattern in international deal volume. (For more about how and why Crunchbase makes these projections, check out the Methodology section at the end of the global report.) 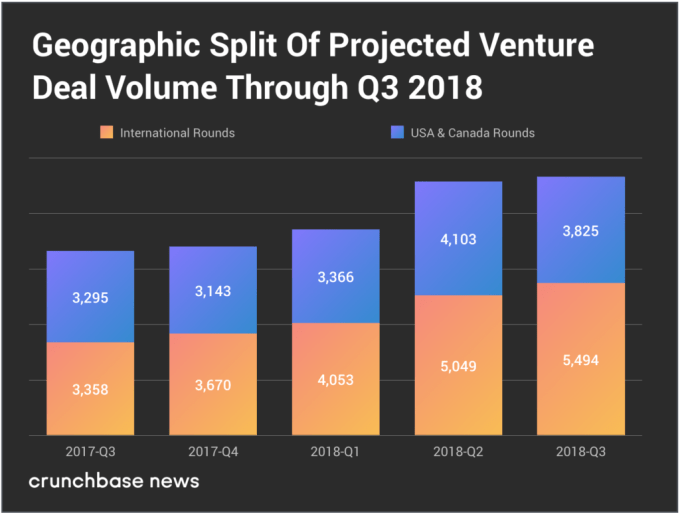 The rise of China’s venture market may be best seen from a city-level perspective. Below is a chart displaying the 10 most active startup cities in Q3, ranked by count of venture deals for each city as reported at the end of Q3. (The Methodology section of the global report also explains what “reported” data is and how it’s used.) 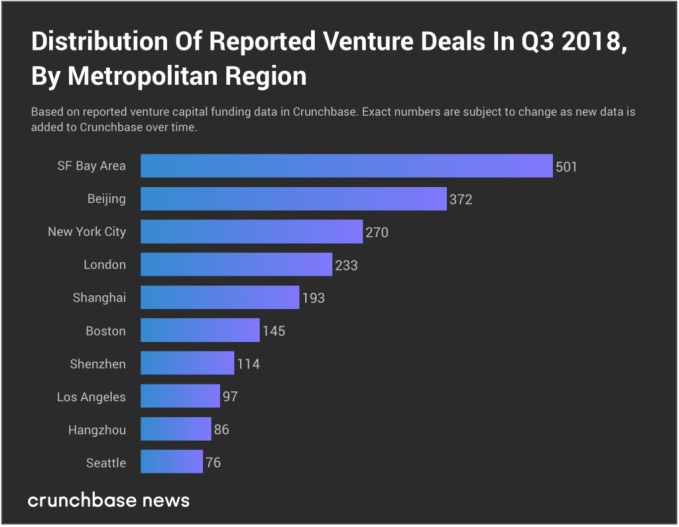 Of the top 10 cities displayed above, only three countries are represented. If it weren’t for the rest of Silicon Valley bolstering the Bay Area’s numbers, Beijing would beat out San Francisco in raw deal counts. (But, then again, Beijing is home to three times as many people as the entire Bay Area.)

Using deal and dollar volume as rough metrics for vivacity (if not necessarily health), this spread in VC activity could be seen as a good thing for the market as a whole. A rising tide of global VC activity lifts all startup markets, worldwide. However, much of that growth is still concentrated in just a few big markets.

The worldwide expansion and local reinterpretation of the Silicon Valley venture capital investment model is a phenomenon with which market participants (founders and funders alike) must reckon. Founders are responding by raising lots of money in ever-larger rounds, hoping that big investor checks are enough to buy large chunks of growing markets. Investors, in turn, are raising ever-larger funds to satiate these companies’ seemingly bottomless appetites for capital.

As in most mega-trends, participants who fail to adapt to changing market conditions will end up on the losing end of the market cycle.